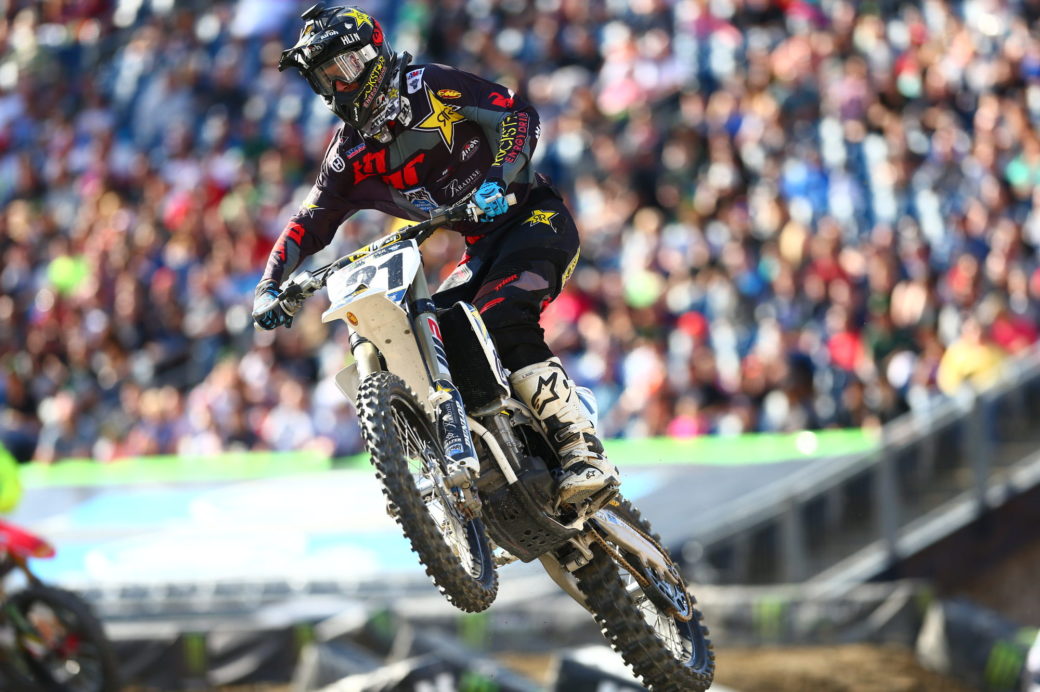 AMA Supercross made its anticipated return to New England on Saturday for the first time since 1990.

With the title in reach, needing to gain just two points over Roczen, Dungey put himself up front to start the 20-lap 450SX Class Main Event, capturing his sixth SupercrossLive.com Holeshot Award of the season. However, Roczen made his way around several riders to emerge in second and apply pressure on his championship rival immediately.

Roczen was able to make the pass on Dungey right before the completion of the opening lap, but the points leader battled back. Behind them Tomac solidified himself in third and set chase on the lead duo.

Despite his best efforts, Dungey was unable to mount a charge back at Roczen and instead fell into the clutches of Tomac, who eventually passed him for second on Lap 3. Once in the runner-up spot Tomac chased down Roczen and kept him within reach for several laps until the field approached lappers, allowing Roczen to pull away.

Dungey continued to drop back, losing touch with the leaders, and was soon engaged in a battle for third with Anderson, giving up the final podium spot on Lap 11. He kept pushing and eventually took advantage of a mistake by Anderson to reclaim the position on Lap 15.

Roczen went on to lead all 20 laps for the second time this season and crossed the line just over nine seconds ahead of Tomac. He has eight career 450SX Class victories.

“[The race was] awesome. I loved this place from my first step on the property,” said Roczen. “The track was really tricky and tough in some spots. We put our head down and got the victory. [The team] has put in a lot of work during the week and it’s finally paying off.”

Tomac’s runner-up effort was his first podium finish since taking the win in Daytona Beach, Florida, six races ago.

Dungey’s third-place result helped extend his all-time record podium streak to 31 races, even though he missed out on an opportunity to clinch a third Monster Energy Supercross title.

“I got up front early but couldn’t hold the gap. I just struggled a little bit,” said Dungey. “I just kept my head up and kept charging. We’ll move ahead to next weekend and look to take care of business there. Nothing we can do but keep it rolling.”

The gap between Dungey and Roczen in the 450SX Class standings now sits at 43 points with two races remaining. Dungey will simply need to end next weekend’s race with a lead of at least 25 points in order to clinch his second straight championship.

Anderson, who finished fourth, was mathematically eliminated from the championship hunt sitting third, 70 points behind Dungey.

As soon as he took the lead, McElrath came under pressure from GEICO Honda’s Malcolm Stewart, the championship leader. Stewart took the lead right after the track’s first whoop section and opened a small gap, with McElrath second and Monster Energy/Pro Circuit/Kawasaki’s Tyler Bowers third.

Davalos started the Main Event in fourth, but was able to move into podium position on Lap 2 by passing Bowers. He then tracked down McElrath over the next handful of laps and made the pass for second on Lap 7, with both riders closing the deficit on Stewart out front during this battle.

Davalos pulled away from Stewart, who then came under fire from Martin, with the Yamaha rider eventually moving into the runner-up position on Lap 9. From there it was a two-rider battle for victory over the final five laps. Martin closed in on Davalos and was even able to show a wheel in some corners, but as they navigated through lappers the distance between them gradually grew. Davalos pulled away in the closing laps and took the win by nearly four seconds.

“It’s been a couple weeks since I’ve been able to ride like this,” said Davalos, who claimed his fourth career victory. “Jeremy [Martin] was riding really good and Malcolm [Stewart] was leading there early on. I just had to focus on my laps. I knew the track would be rutted [after the rain in the morning], but it turned out to be a great day and I’m just really pumped.”

Martin’s runner-up finish follows up his win one week ago in St. Louis. Stewart rounded out the podium in third, rebounding from a season-worst outing at the previous race.

“I’m just happy to be up here [on the podium],” expressed Stewart. “Overall, the race didn’t go as planned, but it was better than last week [when I crashed three times]. We’ll keep plugging away and moving forward.”

With his podium result, Stewart extended his lead in the Eastern Regional 250SX Class standings to five points over Yamalube/Star Racing Yamaha’s Aaron Plessinger, who finished fifth. Martin is third, 14 points out of the lead with two races remaining.

Monster Energy Supercross remains on the East Coast next weekend with its annual visit to the great New York metropolitan area at MetLife Stadium in East Rutherford, New Jersey, on Saturday, April 30. It will be the penultimate stop of the 17-race season, beginning at 7pm ET / 4pm PT.