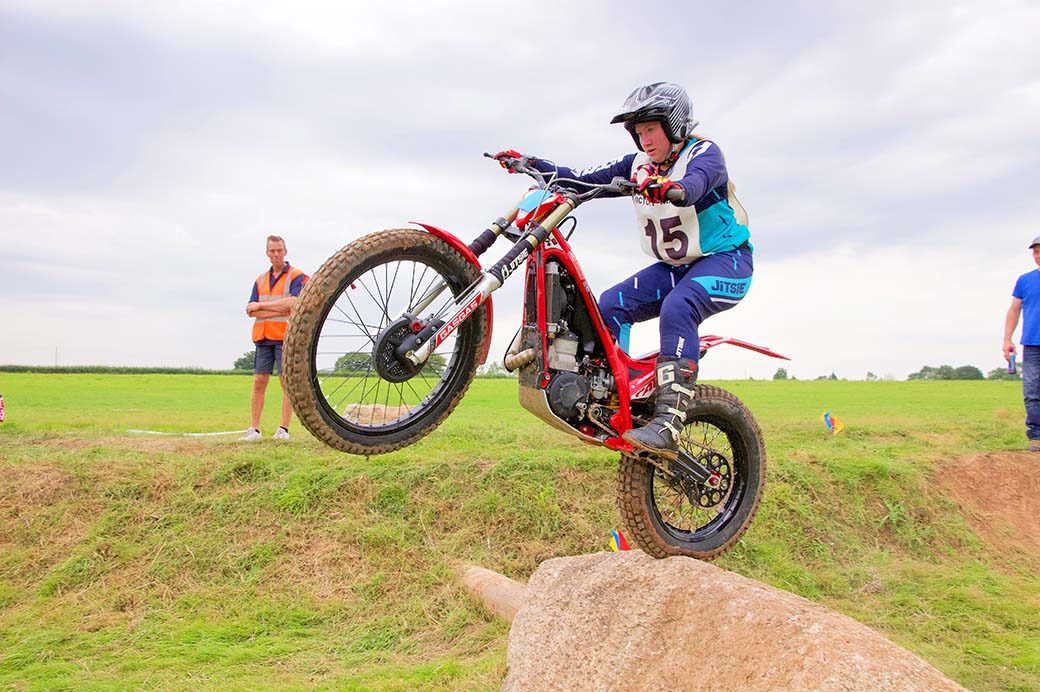 Four down, and only two to go. so with round five of the ACU Belle Trailers British Ladies and Girls Trials Championship completed, the classes are getting closer to an ultimate winner.

This round – hosted by Leamington Victory MCC – was a great success seeing an entry of 34 riders, and celebrating 20 years of British Ladies Championship riding by Donna Fox and Jennifer Crabtree.

The trial consisted of three laps of 12 sections around the Victory 40 Moto Park, riders challenged by a variety of rocky sections with gullies and even a newly-built waterfall to contend with. 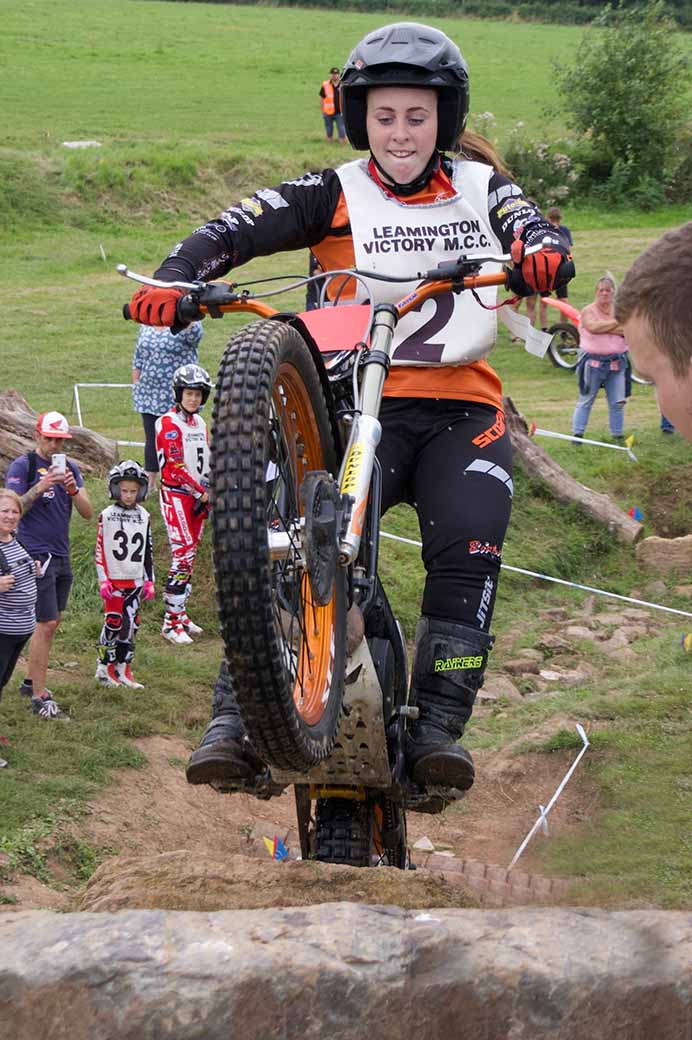 The Ladies Championship were away first, and greeted by a surprisingly tricky opener, with only Donna Fox managing to get through clean on the first lap.

This changed by the second lap, seeing Jess Bown get through it for a one. However, that wasn’t good enough for Jess, so she managed to clean it on her third lap and continued clean leaving her first on 12 ahead of Fox and young Alicia Robinson third.

Young Alice Minta (Scorpa) who rides out of class finished on 48 marks, which would have put her in fourth position. 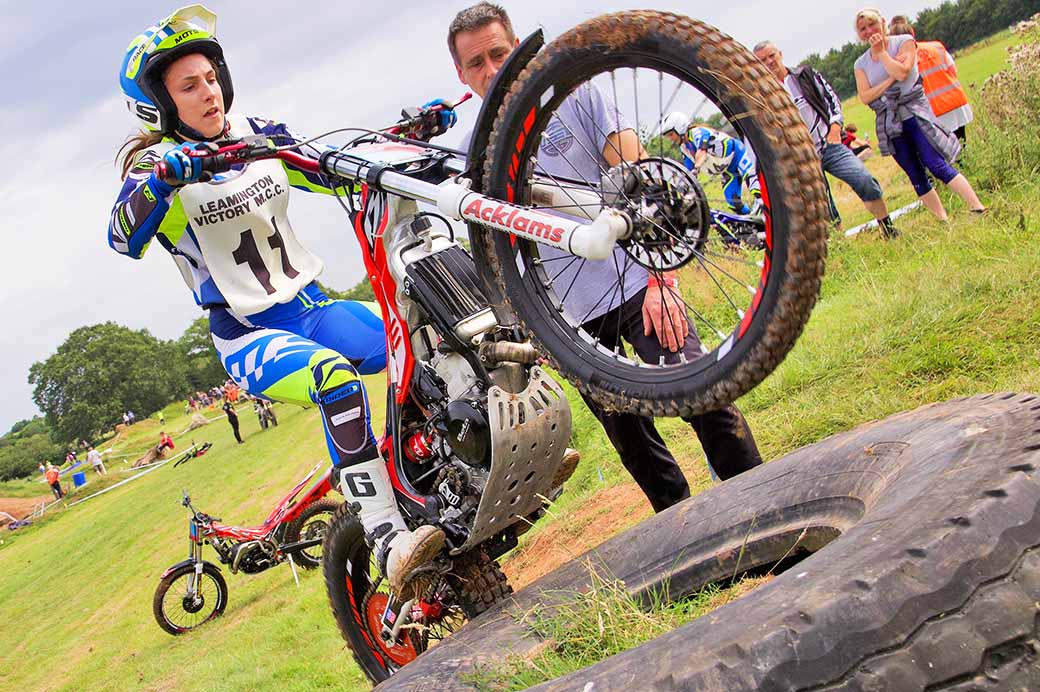 The Ladies 50/50 Championship is always very close between the top three riders, but this round was claimed by Chloe Baker a mere five in front of Jazz Hammond, who was then followed by Bethanie Dunning in third.

This class sees Baker leading the championship with 92, the determined Hammond only three marks behind in second and Dunning a further ten behind. Sarah Bell stormed ahead to take the win from Elizabeth Tett in the Girls 50/50 Championship route, finishing on only 12.

Bell leads the championship, having won every round, so she will want to finish the season unbeaten, but Tett is closely behind.

There was a close finish in the Ladies Intermediates between Charlotte Kimber and Victoria Holmes, the difference only two to Kimber as Jo Minns finished third a good way back.

The championship is tight with Kimber currently leading on 97 points, Holmes on 88, followed by Jo Minns, Olivia Pearson and Zoe McDonald. The Girls Intermediates was won by Amy Clarke 58, a decent lead from Jessica Basford.

Onto the Girls B, which is very close and competitive. On Sunday it looked as if Sophie Bailey, Kaytlyn Adshead and Daisy Parsons would all finish the trial clean, until Parsons dropped a single mark at four on her final lap, leaving Adshead and Bailey tied on zero – and a victory shared. 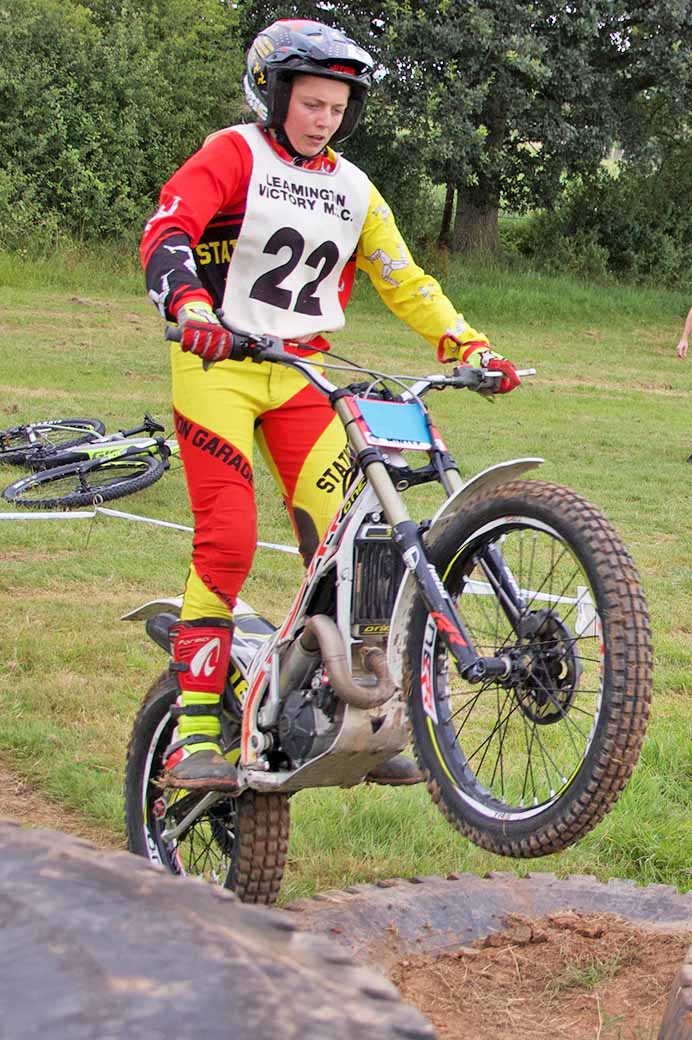 Behind Parsons was Amelia Mayhew, Emily Copp, Amber Richardson and Summer Peters. The final championship standings now see leader, Adshead on 94, Parsons close behind on 89 and Sophie Bailey on 72.

Matilda Arbon remains unbeaten in the Girls C, dropping only nine, but it was close as Brianna King closed on 10 and Bobby Pulman in third on 12. Behind them were Holly Dixo, Kayleigh Rich and Gemma Kerruish.

Daisy Craig, who competes in the Girls D, had to battle the C Class sections, however she rose to the occasion with her dad by her side and finished with 116, and she leads the championship on 77 points.

Leamington Victory’s own Jennifer Crabtree finished with 11 in the Ladies Sportsperson.