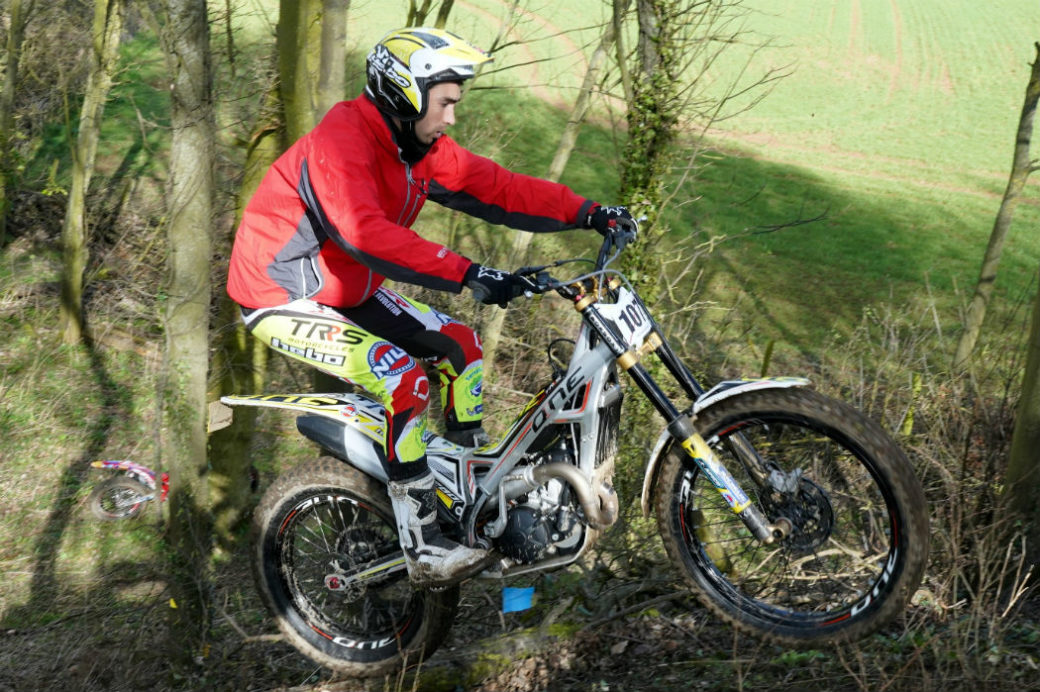 The Colmore Cup is believed to be the oldest National trial in the calendar.

This year saw it running for the 108th time and although the status and venues have changed over the years it still attracted 115 entries for this the third of this year’s S3 series.

With no fewer than 15 groups spread over nearly 30 miles of Cotswold countryside, it needed a 9am start to get everyone going and off to ‘Slatters’ where one sub was awaiting on the extremely windy hillside.

Like most of the country this wind did not give up all day so before we even get to the trial report a big well done to the observers for standing firm all day.

The Clubman class and Over 40 classes were away first and there was not too much to worry the riders at Slatters, Meon Hill or Mickleton Woods.

John Cowley remained clean throughout these first 12 subs as did James Gammons. There were a few marks lost, Ian Wakeford on his way to second place had a dab at Kiftsgate1 as did Steve Swanson who is quite at home on this type of going.

When the Experts arrived at these hazards Ross Danby just went through them nice and steadily as did Jack Price, Guy Kendrew and Tom Minta.

Chris Stay needed a dab at Meon and surprisingly Sam Haslam needed to take two on the first section before hitting his stride for the rest of the day.

Dave Clinkard lost three but he was on his way to second place in the Over 40s – he knows the Colmore going well enough.

There were few problems for the Expert group at the top of the order but much-fancied runner Luke Walker would not have been best pleased to drop a maximum on the last of the groups sections.
Starveall and Jones’s Bank followed before two Subs at Railway which were ideal for refuelling.

Railway started off taking marks on the climbs but with the high winds the sections probably eased as they dried off.

Kevin Nolan dropped a five at Starveall, by far his worst ride of the day as did Phil Houghton, both riders had much better second cards.

Over on the Expert route Stay, Haslam and Jack Price just took the odd dab while Danby and Kendrew still remained clean as riders exited the group and changed their punch cards.

Weston Wood can cause problems and it did take marks from James Gammons, his first losses of the day which allowed John Cowley through to lead the easier route groups. He would remain there for the rest of the day. It was the final sub at Weston the caused problems especially on the Expert route.

After some twists and turns a short run up to a route climb between the tree stumps saw Steve Harris finding a bit more grip than anticipated as he wheeled through the gap.

It was the hazard best forgotten for Jack Price who just did not find the grip to attack the roots and took a five.

There were six subs at Hancock’s which did not alter the positions in any of the classes which is unusual for this group.

Cotstone took a dab from Ian Wakeford while Ian Fortune made sure of a top three place in his class by being clean and then just needing a single dab at Gales’ Wood on his way to the finish.

No-one would catch Cowley, however, as he would complete the course on a total of four lost to finish three ahead of Ian Wakeford with James Gammons just one further back.

Ross Danby remained on zero for the whole event to win the Colmore for the fourth time.

Chris Stay and Sam Haslam both had clean second cards to finish in that order whilst Stay would have been well pleased to be the top S3 points scorer.

The former S3 champion dropped just one dab on card two at the final arena sub back at the start.