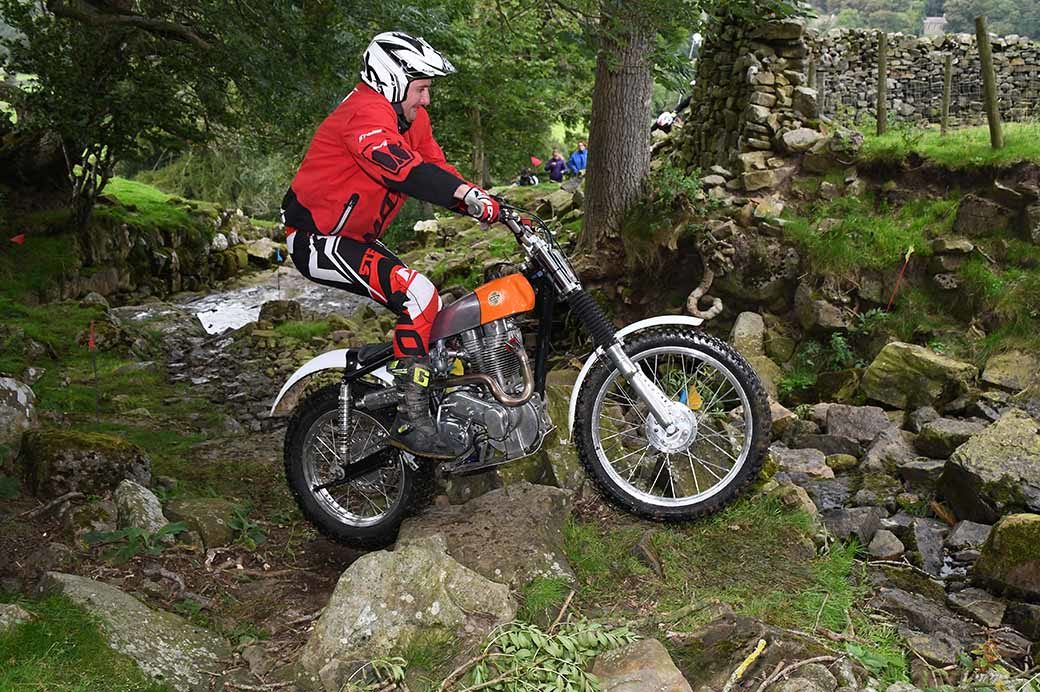 Ride of the day surely went to Mark Sunter on the 500 Ariel (Image: John Dickinson)

Richmond Motor Club, that Yorkshire powerhouse of trials, stepped-up to promote the eighth round of the 2019 KIA National Twinshock series.

It was the first time the club had taken on a KIA round, with AG Brown masterminding the course deep in picturesque Swaledale.

And more than 120 riders got to sample the two laps of 20 sections over virtually incomparable trials land with the accent very much on the abundant rockery interspersed with becks plus a steep, slippery, grassy graded hillclimb to give riders chance to see exactly how their bikes rev out. 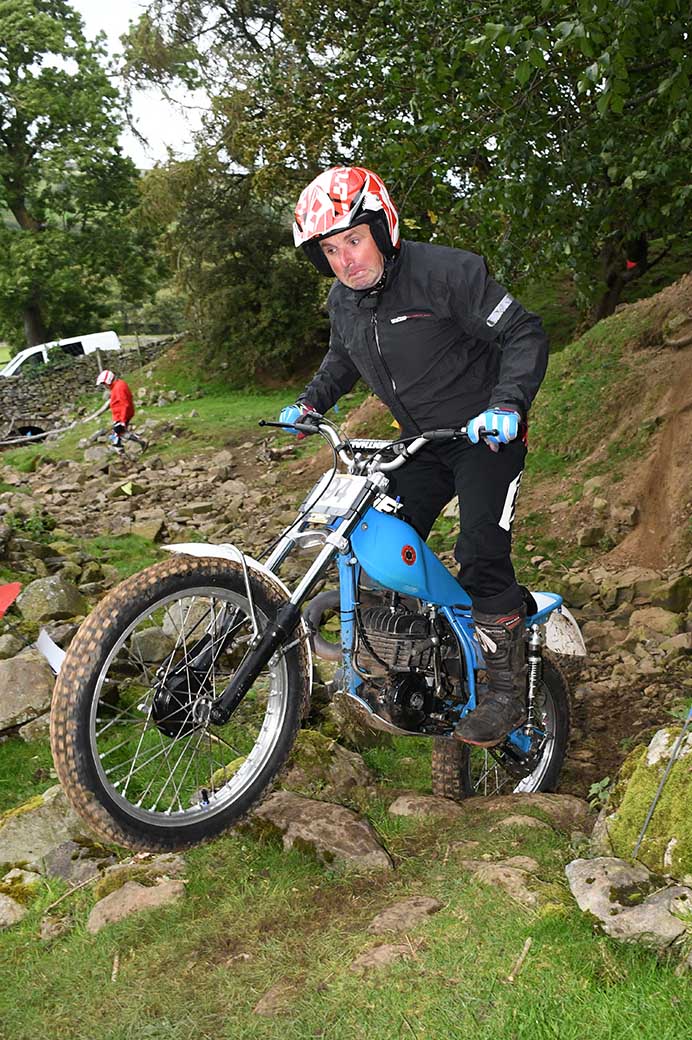 Both courses proved to be right on the button with no clean rides but no silly high scores either.

On the Expert course Twinshock winner Richard Allen used his 200 Gori to good effect to post the lowest score on either course, just six marks including two one-mark penalties on the hillclimb as the little two-stroke ran out of puff.

Chris Greenwood cleaned the climb twice on the immaculate TLR Honda but dropped nine in total, section six causing Chris most trouble with a four and a dab. London visitor Chris Koch filled the final podium slot, a five on section three the only real blot on the Fantic rider’s copybook.

Ripon’s Stuart Blythe came out on top of a Battle of the Bultaco’s in Historic Spanish, pipping series regular Dean Devereux by four marks on the day.

Dean saw his chance of another victory go west with a total of seven on the sixth hazard where Stu bagged a pair of cleans – the only two in the class. 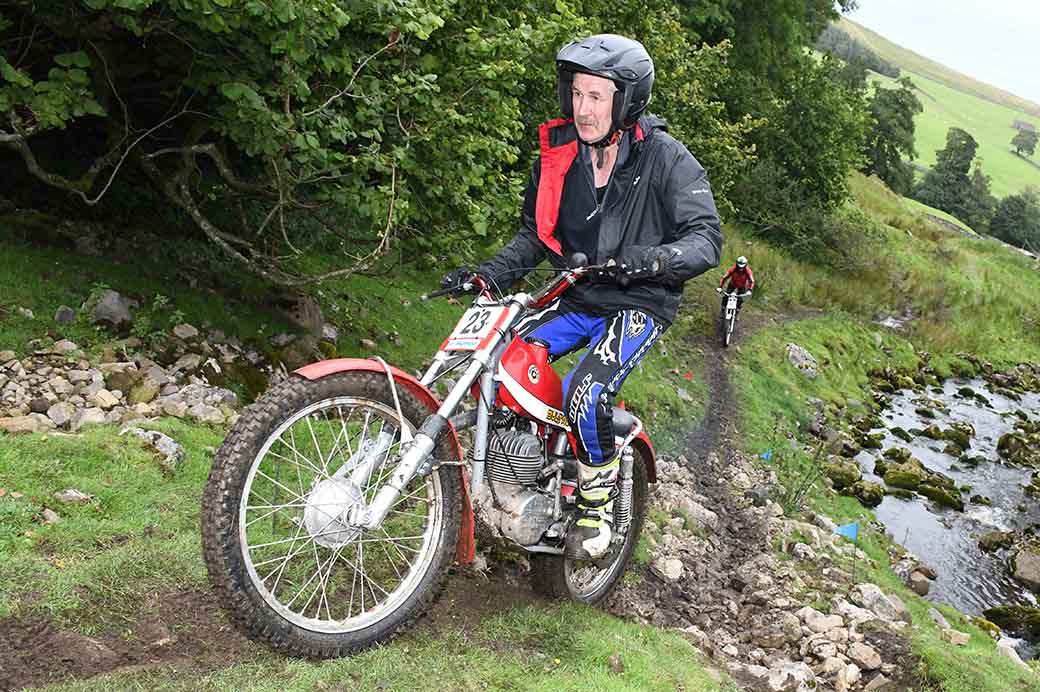 Philip Dyson shocked even himself with two faultless rides up the hillclimb on his 1960s Bultaco. (Image: John Dickinson)

Richard Pulman nailed third for Montesa while former class champ Steve Bisby retired with a puncture on the final lap and Richard Shepherd suffered flooding problems with his carburettor on his RTL factory replica.

There was a real podium battle in Expert Britshock as local ace Mark Sunter mounted on Peter Yeadon’s mighty 500 Ariel gave the Bantams of Ian Peberdy and John Maxfield a real scare.

As ever the Clubman classes were packed with the Twinshock class the most popular and keenly contested right down the order. 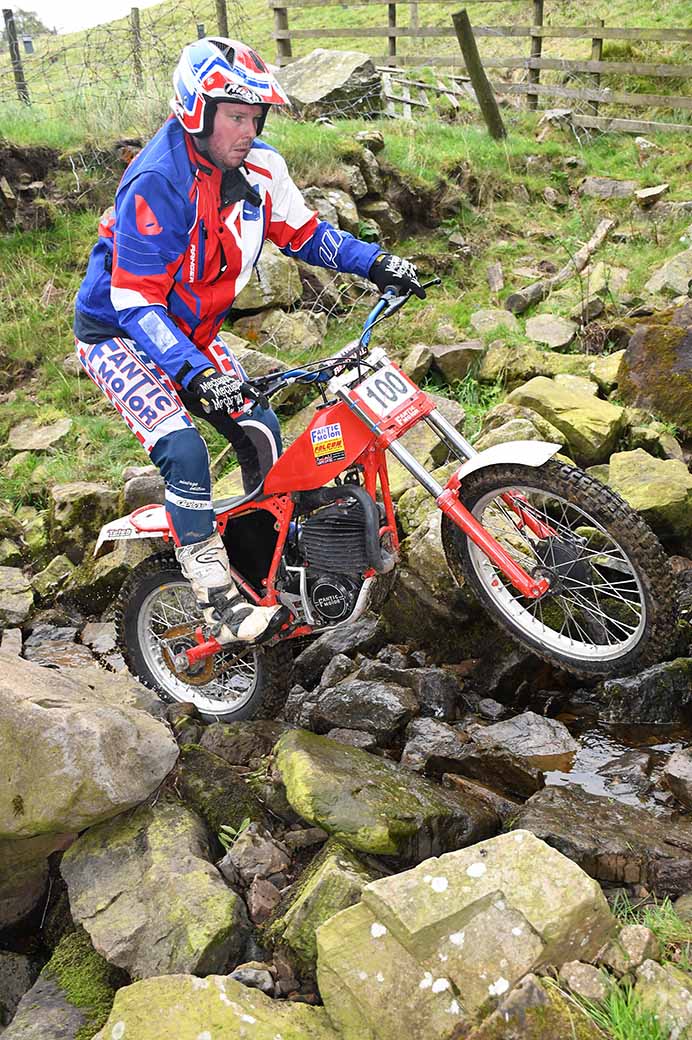 Martin Gilbert made his long trip from Devon worthwhile with victory on his buzzing 65cc Honda TLM. The hillclimb proved costly for the tiny engined machine, six marks in total but Martin made up for it in the rocky subs for a 10 mark total.

This was just enough to win with a one mark advantage over the Fantic of Michael Platts while SWM ace Jim Williams just edged third after tieing on points with the Yamaha of David Coulson and Willie Wood’s Fantic power.

Clubman Britshock was every bit as competitive with the Tiger Cub of Ian Myers just getting the verdict from the Andrew Scott’s Bantam and the four-stroke BSA of Andrew Dennis, which lost its rear brake three sections from home.

David Wilkinson only just missed the podium on his highly polished Bantam. There was plenty of machine choice in Historic Spanish where Butch Robson was really on form riding Paul Wobbler Norman’s 250 Montesa. 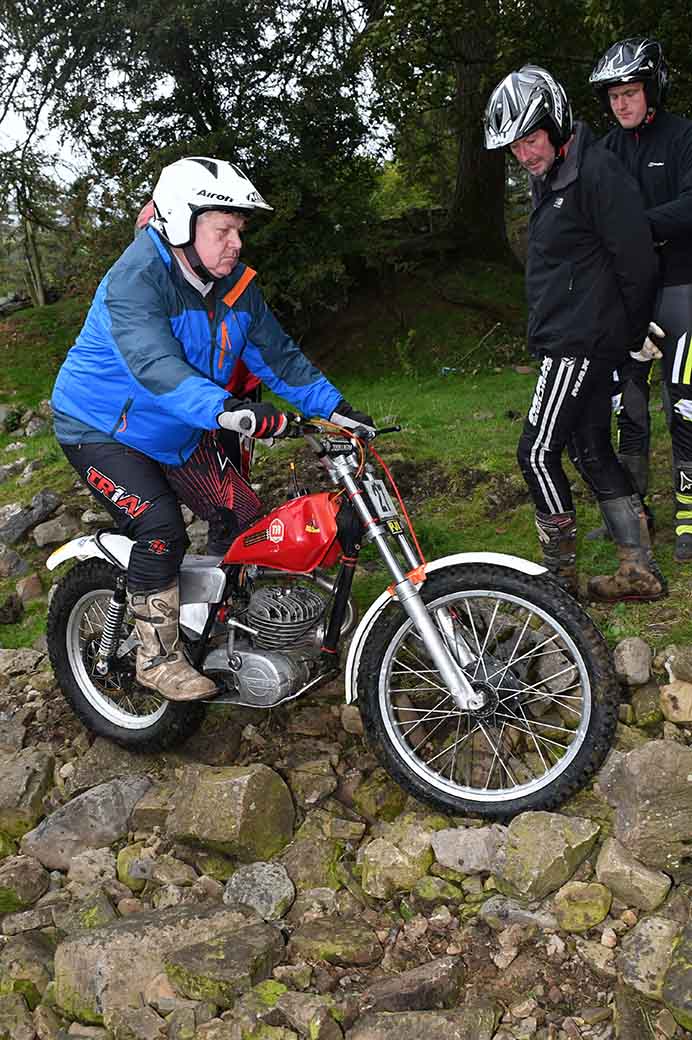 Cheshire’s Martin Beech had the bit between his teeth though and nailed a fine second on a 250 Ossa that he has been riding and developing for 39 years!

Ossy Byers, Butch’s travelling chum, had to settle for third this time out on his Bultaco.

There was a real family finish in Air-cooled Monos with Teesdale’s Hodgson crew, Honda mounted Phillip taking overall honours from 125 Scorpa riding lads Ben and Dan battling it out for the podium placings.

Despite a weather warning of rain in the afternoon there was only a brief light drizzle, which kept the hillclimb nice and slippery.

The course saw some tired and weary finishers but the majority sported big smiles as they discussed cleans and fives at the finish following a proper day’s trials.