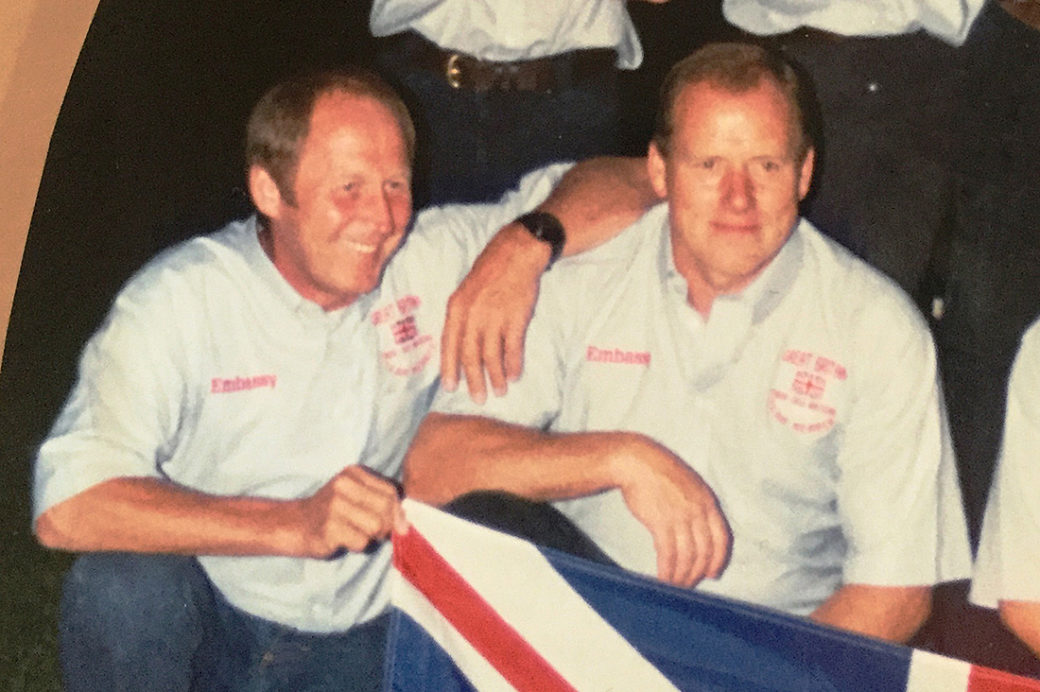 It was with the greatest sorrow that I received the phone call to say Martin was no longer with us.

We have been mates almost a lifetime – about 53 years to be more precise!

I want to say at the very start of this piece that I have written it in the spirit Mart would have wanted me to.

Our whole life together was full of banter and he would not have wanted it any other way now.

We first met as young lads running around the local scramble tracks.

Mart was there with his brothers, ‘Ping’ (Arthur) and Sid (Alan) who were both top scramblers. I just used to go with anyone who would take me – he always had it easy.  The rivalry had already started!

We got to know each other well in the mid to late 1960s when we were both riding local trials. We played cricket for Blubberhouses, darts for the Hopper Lane pub and dominoes in the Lion at Silsden.

Through the late 60s we played hard but we also learned all the basics of competition on motorbikes – trials, scrambles, grass-track and Mart even dabbled in speedway.

Then we started our intense rivalry in the British, European and World Championship and what a fantastic time it was. Tense and cutthroat throughout the event then all forgotten over a couple of beers at night.

Around 1970 Mart had the bright idea to buy a coal-round. He didn’t really like his job and I was on the verge of getting the sack from the forestry for having so much time off riding.

It seemed like a good plan and all went so well we added a second round. All was great for the first few months when we were at home but then the championship started.

We hadn’t thought about that when we discussed it in the Lion and it didn’t seem such a great idea once the trials kicked off. So off we went to the European Championship for a few weeks.

We had a lot of very cold customers and had to pay someone to do it for us.

The memories that spring to mind out of all our years of travelling have to be the fishing in Finland to see who could land the biggest catch, the boating in Sweden where he tried to drown me (I can’t swim), the girls in Czech (he s*** himself) and the cars in the US.

We got the biggest car we could find on our first trip to America but I once sent him to buy a pizza and it was so big he couldn’t get it in the bloody car.

He hated  the troubles in Northern Ireland and the poverty in the Eastern block where you had to change a certain amount of their money on arrival but there was nothing to spend it on – we once brought back 45 pairs of desert wellies just to spend the money.

In France he set the van on fire making chips and then there were all the brilliant times we had at the factories in Barcelona with the Bultaco and Montesa families.

It’s really just impossible to list every memory, I would need a book and if ‘H’ was here he would remind me of a lot more that I have forgotten.

After we both retired from riding I bought a hotel with Rhoda in Grassington and Martin and Isobel bought a pub at Greenhow, a mere five miles apart.

We figured we had both lived in hotels for 12 years and had certainly spent a lot longer in pubs so it seemed the ideal answer to what we did in our retirement.

We should have known motorcycling was in our blood and it wouldn’t be long before we were involved again.

After our stint in the real world a few years later it all started again with another 10 years plus, where Mart was with Dougie and I was with Graham Jarvis – only this time we could have more beer.

Some of my greatest memories through this time had to be of the Trial Des Nations – where against all the odds we managed to pull off the wins with Mart and myself leading the troops, so to speak.

Our first win was in the Isle of Man in 1997 but 1999 was a classic as the organisers had mistakenly thought Steve Colley had a five on the last section when in fact he cleaned it.

The guy at the end had put a five as that was Steve’s riding number!

I just remember Mart standing on a chair with a huge jug of beer singing ‘We are the Champions’.

We followed this in 2002 in Portugal and 2003 in Italy and the memories of those wins, against all the odds, where Mart and I worked together with our GB team, are unforgettable.

To any outsiders Mart came over as a big, rough Yorkshireman – and in some ways he was.

He didn’t stand fools – although he seemed to find one in every bar we went in – but he had the biggest heart and the softest spot possible.

A great, great friend, a brilliant mate and an exceptional competitor – but I usually won.

If ‘H’ had written this it would have been the total opposite of what I have said. That’s how it was between us.

Our friendship and the respect I had for him were special.

It didn’t matter if we were seeing how many stones we could throw into a bucket at the SSDT waiting for Doug and Graham, or whether it was seeing who got to the pub first when we were out having a meal in later years – it was always a competition.

The memories will stay with me forever.

Mart will be sadly missed by everyone who knew him but especially by his close friends and family.

The Lampkins are known for their closeness and I can’t imagine the effect this will have but they are strong and will hold together throughout this sad and cruel time. My love to all of them.

God bless and RIP mate. I’ll see you up there. Malc