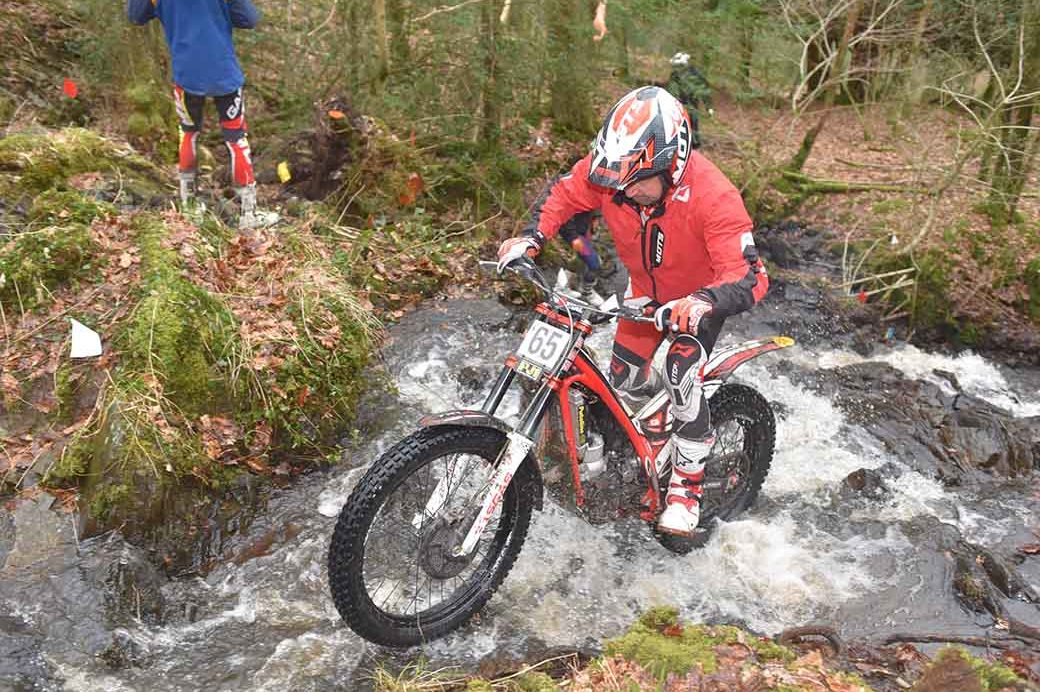 Darren Wasley will be going for Over 40 glory in his home S3 Parts round (Image: John Dickinson)

This Sunday sees round four of the eight round ACU S3 Parts National Championship courtesy of the Hillsborough club and their long-standing Jack Wood National.

The club faithful, Andy Longden, Dave ‘Haggis’ Knaggs and co, have been out making and scrubbing in the sections for several weeks, with Andy testing a new wire broom on the slippery rockery that is proving very effective and amazingly they have enough observers to cover the 50 sections. This is the only 50 section single lap National in the calendar.

Using the ACU on-line entry system they had achieved the 130 entry limit in just five days and because many on the reserve list were competing the whole series the club increased the limit to 150 so it’ll be a longer day, and then a total of 7,500 section scores to input. In order to to accommodate the increase in entry the time limit has been reduced by 15 minutes to seven hours which Haggis stresses this divides out to about eight minutes a section.

But with between section time to factor in it’s not a day to be hanging about, so keep it moving guys! The Championship class is super close after the first three rounds with veteran Dan Thorpe (Gas Gas), riding his ‘home’ round on Sunday, just in front on 49 from Isle of Wight youngster Chris Stay (TRS) who won the last round, the Colmore.

Chris is just three marks behind Dan but just two in front of Guy Kendrew (Gas Gas) with Luke Walker (Sherco) and John Crinson (Beta). The Clubman and Over 40 classes have been separated out and both are now standalone classes (see separate story below).

In the Clubman class Richmond’s Richard Fraser goes into the Jack Wood a clear leader with 41 points leaving Ian Fortune and Richard’s brother Tom scrapping for second with Katy Sunter Thorpe sitting right behind in fourth. In the well contested Over 40s north Wales ace Phil Houghton currently sits on top but will surely come under threat from local ace darren Wasley on Sunday.

Midlander John Cowley sits third, having taken max class points in his local Colmore Cup while Phil’s pal Tony Buckley is next closely followed by Kiaran Hankin and Steve Swanson. The start will be at Crawshaw Head, Hollow Meadows, S6 6GN as used for the last few years. Riders are asked to ride sensibly on the roads and watch out for cyclists and walkers and spectators are requested to follow the instructions in the programme regarding sections and to PLEASE park sensibly.

The first four groups and 14 sections are out of bounds to spectators who can pick up the action at TOR and Rocher End before moving on to TCC, Hall Broome and Ughill with the final seven sections at MB. Take note that spectators are not allowed below the bridge at River Kwai. And don’t forget, the clocks go forward this weekend…don’t turn up an hour late!

Following on from last week’s story regarding the S3 Parts Clubman class and Over 40 class having been separated the ACU have issued the following press release: The decision to split the Clubman Championships into two separate Championships follows enquiries from several riders.

We are looking to encourage the younger riders to enjoy the traditional style trials in the S3 Parts series and believe that creating two championships was the way to achieve this as well as persisting with the 125cc class for the same reason. As the Over 40 was something new to this year’s Clubman series, this should be considered a tweak to the series rather than a major change, and was included with the best of intentions.