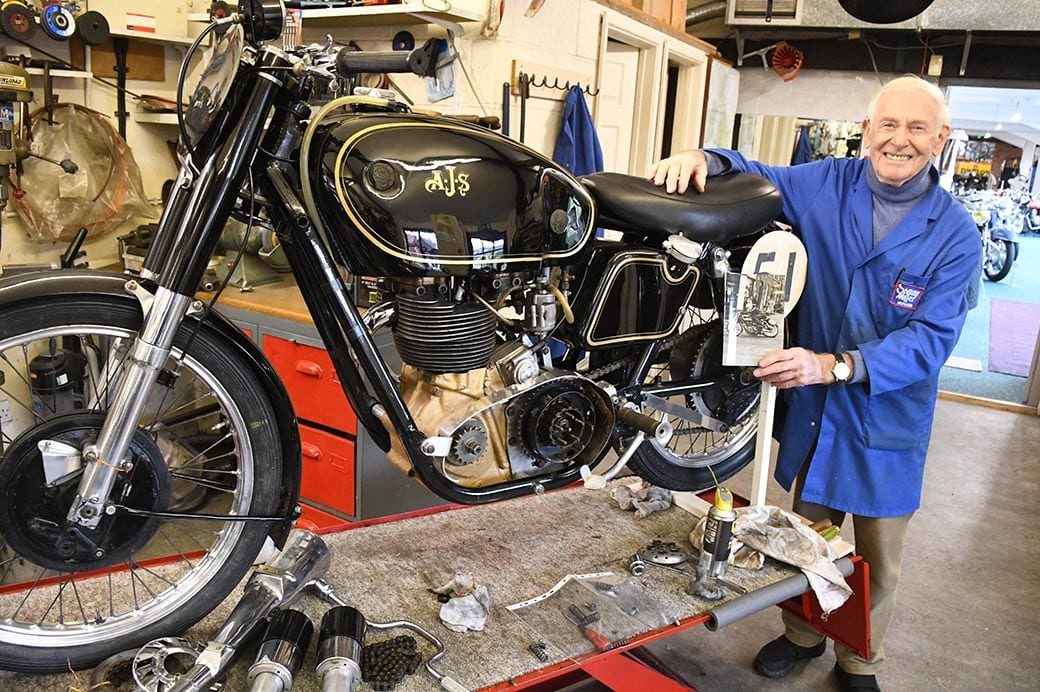 The man himself still gets his hands dirty at 86, Sam was busy fettling a customer's AJS road racer in the workshop (Image: John Dickinson)

The Sammy Miller Motorcycle Museum (Sammy Miller Museum Trust), is without any doubt one of the finest motorcycle museums in the World and if you have ANY interest in all things two wheels – as you surely must if you are reading this – then a visit is an absolute MUST.

I have been promising myself a trip for years and years, but the 600-mile round trip from Cumbria to New Milton in distant Hampshire was always in the way. Recently, though, the opportunity arose to do a bit of a swerve and a quick detour and there we were, pulling into the car park after the drive from hell in heavy rain and flooded roads. 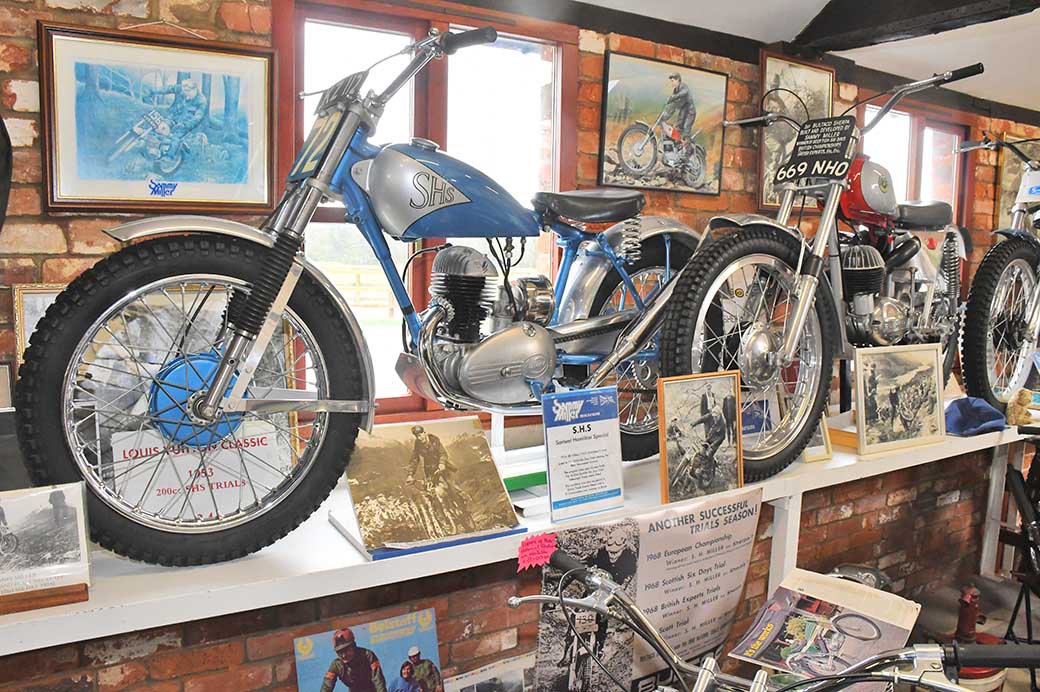 Was it worth the effort? Quite honestly, having now seen the museum and its exhibits I would have swum there through the floods.

It is a truly amazing place. It isn’t just that there are some 400 motorcycles, it is that they are ALL special in a unique way.

There is not a single ‘ordinary’ motorcycle on show, each has a story to tell. From exotic one-off GP racers like the amazing 1939, water-cooled, supercharged V4 AJS to the humble Vincent Firefly 50cc moped, the museum never ceases to amaze. 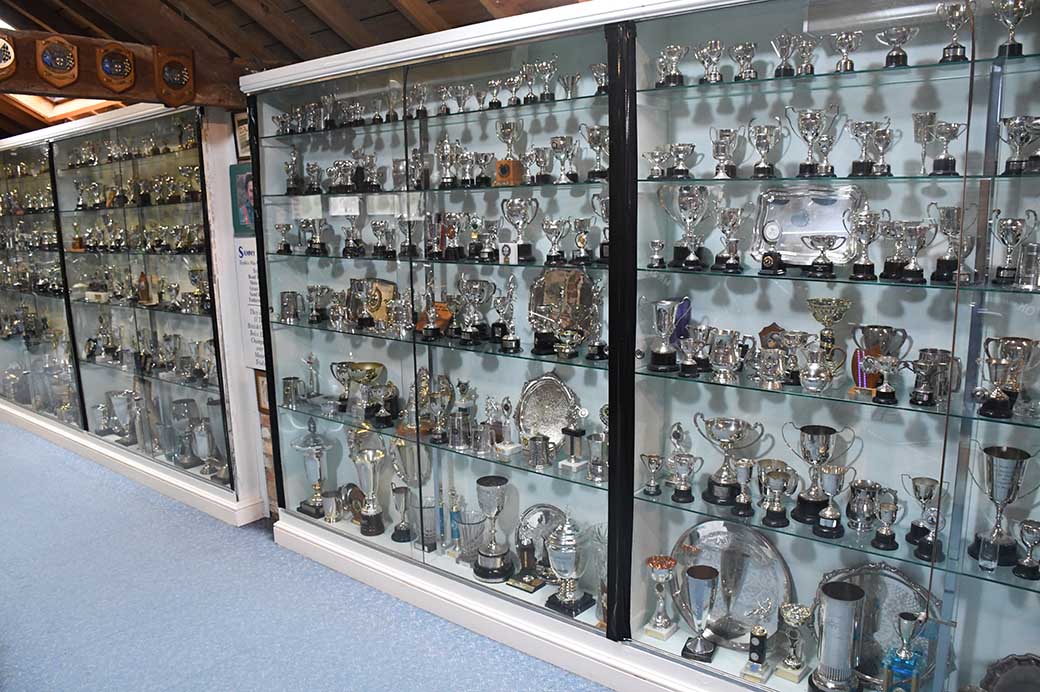 How does your trophy cabinet stack up against Sam’s – so big we couldn’t get it all in the picture…!

Sammy has a soft spot for the Norton collection, which houses unique factory racers like the 1953 ‘kneeler’ and also the earliest Norton still in existence, a 1905 model with French Peugeot engine.

You can see the five-cylinder radial-engined Verdel, or a three-cylinder air-cooled two-stroke triple motorcycle, hand-built by British engineer Bob Tait, or gaze at Sam’s own four-cylinder factory Gilera racer.

The Trials Hall naturally houses Sam’s own collection, including the Ariel GOV 132 and his first-ever trials machine, the SHS – Samuel Hamilton Special – which comprises a Villiers 8E engine mounted in a 1934 Matchless frame on which he took the Newcomers award in the 1954 Scottish Six Days.

There is also an original Bultaco Sherpa, a factory Honda which he developed, and also the prototype 1978 Miller machine, with Italian Hiro engine. This was to have gone into production but supplies of the engine weren’t forthcoming. 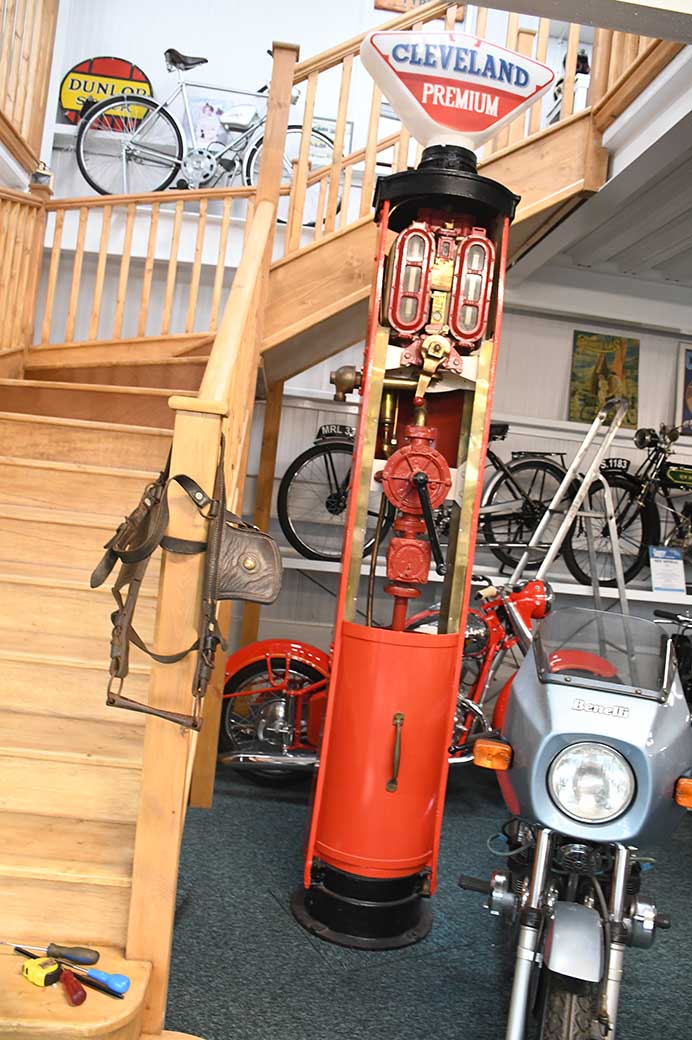 There are also numerous interesting engines on display throughout the museum, some in cutaway form and countless exhibits like vintage petrol pumps, signs, fuel and oil cans, old tools, etc, etc. It is a veritable Aladdin’s cave.

This brief skip-through, chaperoned by Sammy himself, doesn’t begin to touch what’s on display. There are rare machines of British, American, Italian, French, Spanish, Belgium and who knows how many other countries. Seeing really is believing.

Sammy Miller is, by any standards a remarkable man, he was an all-rounder as a motorcyclist, having won trials, scrambles, grass tracks and road races.

His racing successes include winning the 250cc class of the North West 200 three years running from 1956-58. 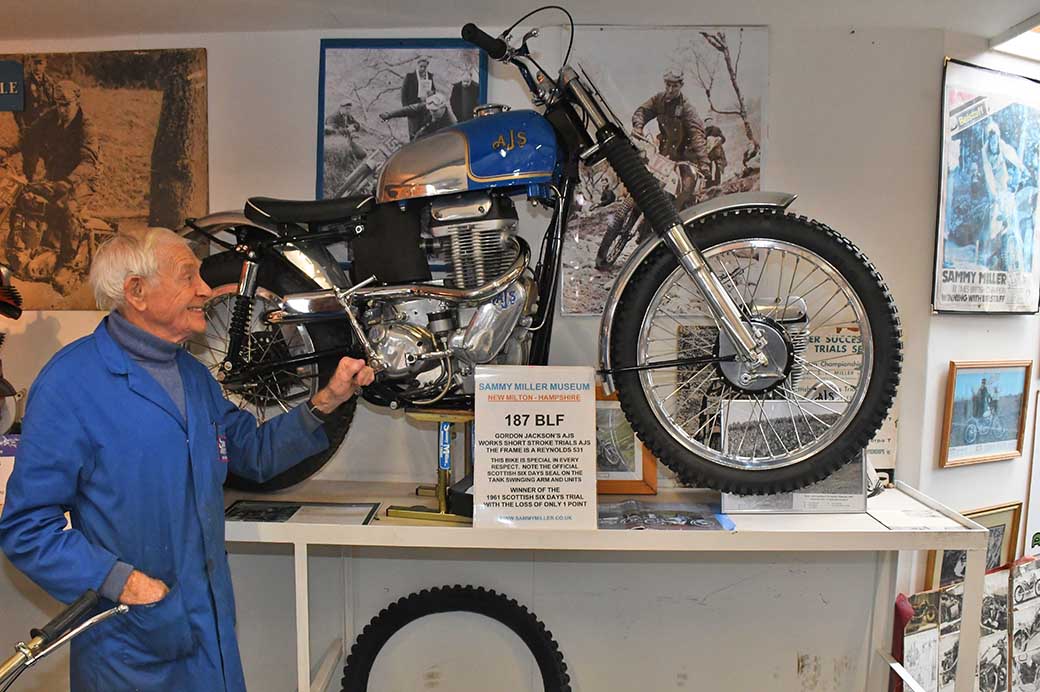 Sam shows-off another famous machine that you can study, the factory 350 AJS on which Gordon Jackson famously won the 1961 Scottish Six Days Trial on just a single mark – cast away on Grey Mare’s Ridge, high above Kinlochleven

Many were achieved on his famous 500cc Ariel HT, registered GOV 132, before he went on to change the face of trials in its entirety. In 1965 Sammy was signed to the Spanish Bultaco factory, developed the prototype Sherpa model in 12 days, and the rest is history.

Two-stroke Spanish motorcycles, led by Bultaco dominated the trials market almost instantly and in turn his domination led directly to the introduction of Pre-65 trials.

Sammy then went on to found the museum which began as a way of showing off his own small collection of machines, which rapidly burgeoned as people with rare machines realised that this was the place they ought to be.

Now, at the age of 86, Sammy is as driven and busy as ever. He gets his hands dirty every day in the workshop restoring the never-ending stream of exotic machinery. 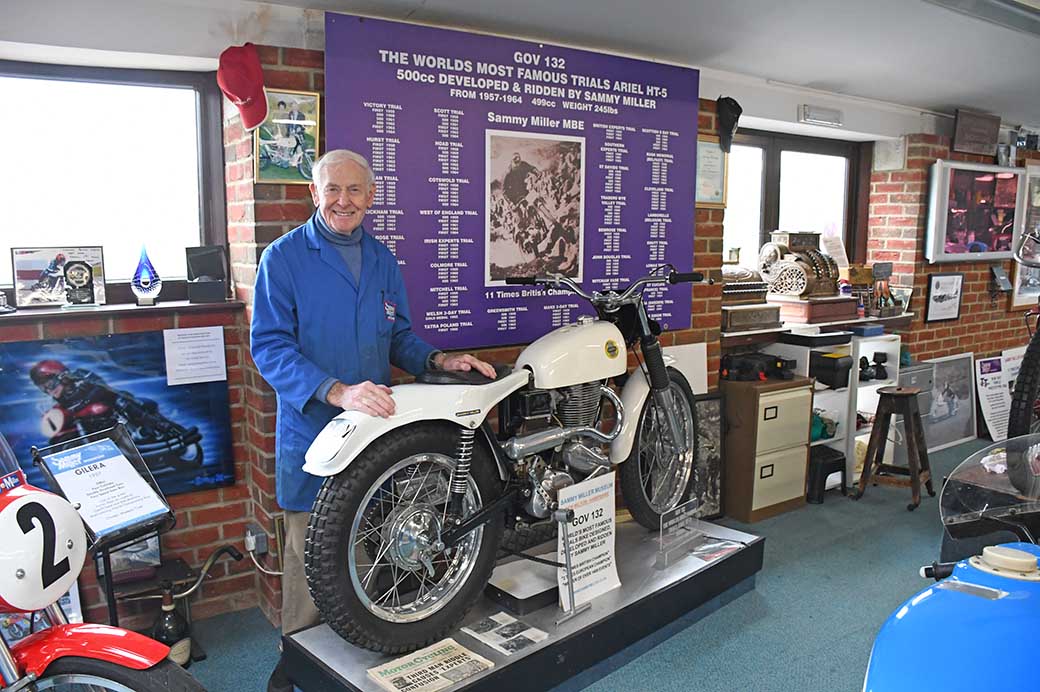 Sammy Miller and his famous 500 Ariel, GOV 132, in front of a board that lists all their achievements

“What man has made, man can make again,” is Sam’s mantra as he brings back from the dead the often unique machines.

It is a point of honour that virtually every machine on show is a runner and periodically bikes are taken out into the fresh air to be burst into life and ridden round the yard usually, with schoolboy glee, by the man himself.

At the time of my visit, the museum was actually closed as the indefatigable Sammy had just finished overseeing the building of a superb new extension and was organising the display of machinery and paraphernalia ready for the re-opening.

You’ll need to check when the Museum is open before travelling. But Sammy kindly agreed to give me an hour of his valuable time for a whistle-stop tour. 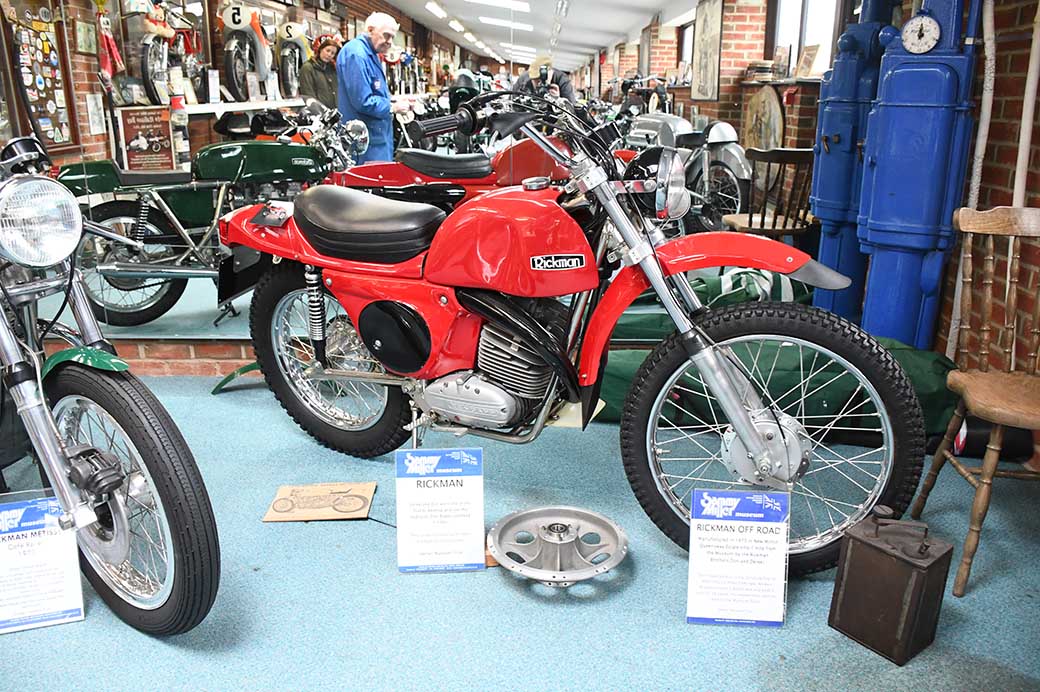 After restoring this lovely 125 Rickman Zundapp, Sam was planning to ride this in the Moidart Run, prior to being Guest od Honour at the Scottish Pre-65 Two Day Trial. Sadly that has had to be put on hold

He is remarkably sprightly for 86 and I was soon gasping in his wake!

I asked Sammy, given the fantastic variety of machinery he has accumulated, if there was anything that he still needed for the museum. Quick as a flash he came back with, “Just more time to enjoy it all…”

And so say all of us Sam.