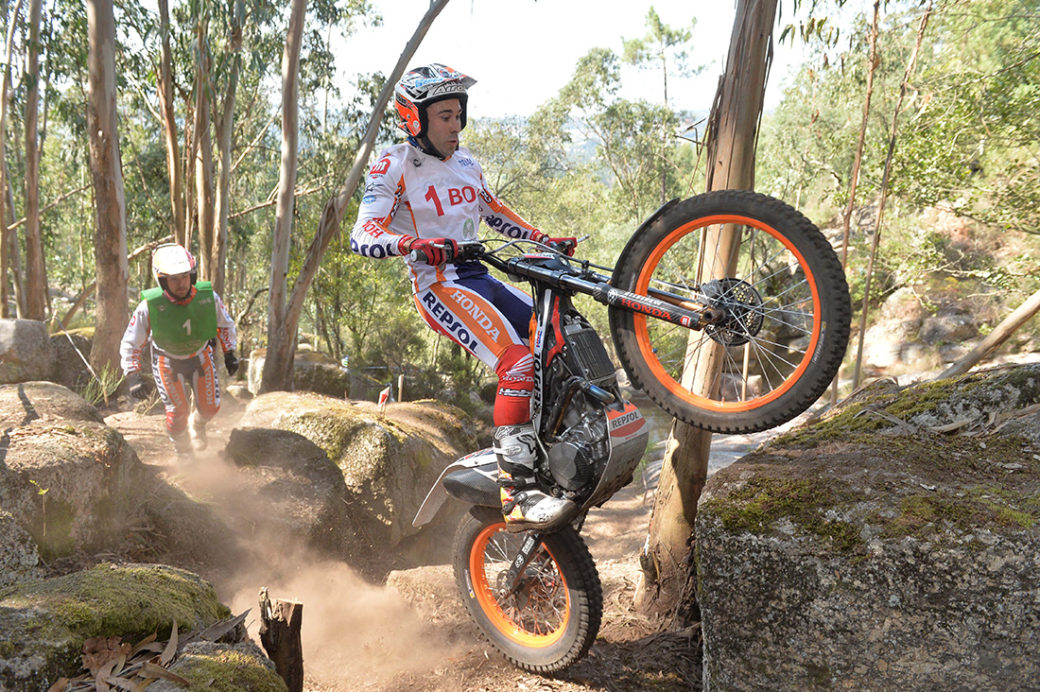 The 2016 FIM Trials World Championship kicks-off with Spain staging the opening round over two days at Cal Rosal in Catalunya, around 100k north of Barcelona near Berga, a red-hot trials region.

But the 29-year-old Repsol Honda star’s season starts with him not being 100 per cent fit, after a shoulder injury sustained in a training crash forced him to quit the Spanish X-Trial des Nations team last Friday (see report page six).

The FIM has re-named the three Championship classes TrialGP, Trial2 and Trial125, which at International level aligns the sport with road racing and motocross which are of course MotoGP and MXGP – (MX1/ MX2 etc).

This year the series will comprise eight rounds, with 15 days competition as all rounds feature two scoring days except for Belgium in July which is just a single day’s contest.

And this season will see just the one flyaway round – there’s no America or Australia – which will be the Championship’s 16th visit to the Honda-owned Motegi circuit in Japan, where the sections are set round the periphery of the facility.

And Japan represents the second round of the series that will follow Spain in just two weeks’ time.

Other well-known venues that will see TrialGP action this year are Gefrees in Germany and Saint Julia de Loria in Andorra while new ones will be Lourdes in France, San Pietro Mussolino in Italy – which will bring the series to a close – and the penultimate round at Tong, in Bradford, Yorkshire where Great Britain will host the penultimate event.

The British round sees a surprise move away from Nord Vue, near Penrith, Cumbria, after four years (five times in total) and the more centrally-located, urban Bradford venue is seen as a chance to draw bigger crowds, while section builder Graham Jarvis is energised by a new challenge.

But the big question remains, can anyone halt the seemingly unstoppable run of Toni Bou?

He has just tied-up his tenth straight World X-Trial title and is odds-on favourite to follow this up, yet again, with that tenth outdoor TrialGP crown.

For yet another season, the major challenges are expected to come from the more experienced riders in the form of Spain’s Adam Raga (34), Jeroni Fajardo (31), Albert Cabestany (35) and popular Japanese vet Takahisa Fujinami (36).

Raga campaigns the all-new TRS in seven-time World Champ Jordi Tarres’ factory squad, Fajarado will head-up the Vertigo effort, Cabestany continues his long-standing tie with Sherco and Fujigas has only ever ridden for Repsol Honda/ Montesa.

There is actually only one rider under 20 years old in the current top 10 and that is Bou’s Repsol Honda ‘understudy’ Jaime Busto, who will be looking to demote at least some of his elders and claim a top-three place in this year’s competition.

Next youngest in the top 10 is Beta’s No.1 Jorge Casales (20) and given an injury-free run Casales – who contested the 2015 British series for John Lampkin – will be looking to score regular top-five placings.

He certainly has the talent.

Franz Kadlec is an 18-year-old with a point to prove and the current No.11 has moved from Beta to be the new Gas Gas No.1 and the young German could spring a surprise or two.

In 2014 he was right on Busto’s case in Trial2 and will be looking for that kind of form right from the off.

With 23 riders entered in the opening round – and most expected to contest the full series – the 2016 series has the potential to be the best for some seasons.

There is a host of young riders coming forward including last year’s from Trial2 (World Cup) including first, second and fourth from the 2015 World Cup (Trial2) in the shape of Carles Quentin de Caudemberg (20), Miquel Gelabert (just 18) and Oriol Noguera (20).

All three of these youngsters are on their way up and will drive each other on.

Throw in the hard-working Swede Eddie Karlsson, tenth in 2015, Norwegions Hakan Pederson and Kristian Sorensen, Spain’s Francesc Moret and further up the order, top Frenchman Alexandre Ferrer – who seems stuck just outside the top five – and anything can happen.

Britain has just two runners in 2016 and these are pals James Dabill and Michael Brown.

With the arrival of Fajardo at Vertigo James doesn’t now have the whole pressure of representing the factory on his shoulders.

And at 29 now needs to re-establish himself as a top-five contender and move up from last year’s eighth-place finish.

Early doors, after last year’s disaster in Japan and a season-long rehabilitation, Browny just needs to stay out of trouble and regain his confidence.

He has the backing of the new Gas Gas management and of John Shirt and no-one has any great expectations. Michael’s knee is nowhere near back to full operational fitness and this weekend will be a huge test.

And with just eight entries in Trial125, Britain is well represented by 16 year-old Jack Peace, Gas Gas mounted like his brother, and Jake Ely, just 15, on Beta.

All rounds count towards the TrialGP title, so no room for any error there, Trial2 drop their two worst scores – so riders cound miss the flyaway to Japan and still be in with a shout while Trial125 drop the four worst scores which ought to help keep travelling costs down for the Youths.