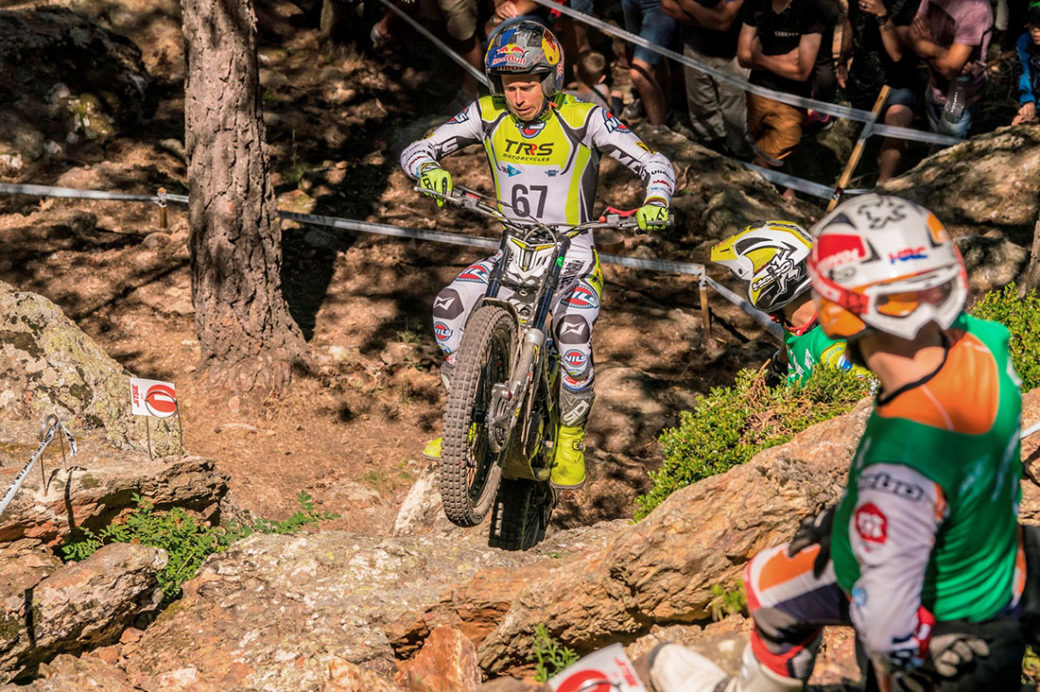 ADAM Raga opened up the 2017 FIM Trial World Championship with an important victory in the third round of the series staged in Andorra last weekend.

Not only did the TRS star take maximum Championship points but Repsol Honda ‘apprentice’Jaime Busto claimed second, nudging his illustrious team leader Toni Bou down to the third step of the podium.

These three were well clear of the rest of the field and the result moves Raga within 10 championship points of a Bou as the 10-times Champion was threatening to run away with the series after winning the opening round in Spain and both days in Japan.

It was Bou’s first defeat of the year in any competition.

The trial in Andorra was staged in both altitude and heat, a double whammy for the contenders but one which obviously suits the Spanish contingent and Bou now bases himself in the tiny Principality, sitting in the Pyrenees between France and Spain.

St Julia de Loria once again hosted the TrialGP Andorra with the sections – with one man-made exception in the town centre – set on the steep, bone-dry, wooded, rocky hillside high above the town.

With the heat and section-difficulty, riders were reluctant to get on with things and all the Championship class landed themselves with time penalties.

And while you can argue that they undoubtedly affected the results it is only because the riders allowed them to!

Busto had won Saturday’s Qualification with a stunning quick ride through the section but all the main contenders were at the back so none really had an advantage.

Riding confidently Raga fully deserved his first-lap lead, easing his TRS through the 15 sections for just 14 marks with Busto hot on his heels on 16 and Bou back on 20 after collecting no fewer than four maximum five-mark penalties.

These scores included a ‘compulsory’ five on the final section in the town centre as no rider managed to reach the Ends cards on this extreme hazard.

Bou then made his customary move on lap two, after riders had enjoyed a 20-minute ‘cooling’ break between laps, to post a score of just six, in effect just a single dab taking the ‘impossible’ final section into account.

This was easily the best score, the only one in single figures but even taking the time penalties into account Raga had won fair and square, both riders dropping eight time penalties.

Busto was two marks more than his team leader in the sections but three less time faults elevated the jubilant 19-year-old into second place.

It was a disappointing day for Dabill as he had qualified well but could not get to grips with the sections and a total of 11 fives and lap scores of 33 and 34 just weren’t good enough in what is a highly competitive entry.

Fellow Gas Gas mounted Brit Jack Price also struggled in the conditions and although Pricey made a promising start to the second lap, cleaning the first four sections and taking a dab in the fifth, a string of fives inevitably saw his score escalate and Jack had to be content with a single Championship point on the day.

“I’ve been working very hard on my physical conditioning and on the motorcycle and this preparation has paid off today. The team has also put a lot of effort into the bike and I’m confident we now have everything in place to challenge for further wins until the end of the season.”

TRIAL2 is always very competitive, with Andorra no different, and so far no single rider has been able to really stamp their mark on the class.

The bad news is that Britain’s Iwan Roberts had his worst result to date with fifth place on Sunday – the good news is that Iwan now leads the Trial2 series standings by six points!

Prior to Sunday, Spain’s Montesa-mounted Francesc Moret was Iwan’s closest challenger but Moret could only manage ninth place in Andorra as France’s Gael Chatagno stepped up to the mark again, having already scored a victory on Day 1 in Japan before Iwan showed his true skill on the second day.

Gas Gas-mounted Chatagno laid the foundations of his victory with a three-mark opening lap and he followed this up with six on the second, the only rider in class to post two single-figure scores and he fully deserved his win.

The margins were very fine and it was a case of clean or five and while Chatagno was ten marks clear of runner-up, Italian TRS rider Luca Petrella, from then on it was close right down the order.

Petrella and fellow TRS rider Spain’s Marc Riba, actually finished level on 19 marks apiece and had to be separated on a tie-break.

Iwan did little wrong in the sections, the damage being done by the clock as six time faults effectively kept the Welsh star off the podium – significantly the top three remained free of time penalties.

Dan Peace on the Gas Gas and Vertigo’s Toby Martyn fell to a similar fate as Iwan, Dan and Toby finished packed close together in sixth, seventh and eighth with Italian Montesa rider Gabriel Marcelli between them and the podium.

Dan’s brother Jack had something of a torrid time in Andorra, claiming a solitary point for 15th, as he gets to grips with a first season in Trial2 having moved up from Trial125.

After three rounds (four scoring days with two in Japan) these two are already well clear of their class rivals in the Championship.

Gandola took a clear win in Andorra but as in Trial2 it was always on a knife edge.

Both Lorenzo and Billy only had one five-mark penalty on the opening circuit, with Billy losing out with five odd dabs against just two for his rival.

And it was a similar story on the second lap with Gandola just having that extra consistency.

The clock was involved again in this class although it didn’t have much effect on the end result.

Britain’s only other contender Jake Eley doggedly stuck to his task to finish in 19th.

Taking his third win in the series, Gandola eased out to a six-point lead over Billy Green but there is so little in it and Billy will be seeking revenge when the Championship moves across the border into France this weekend.