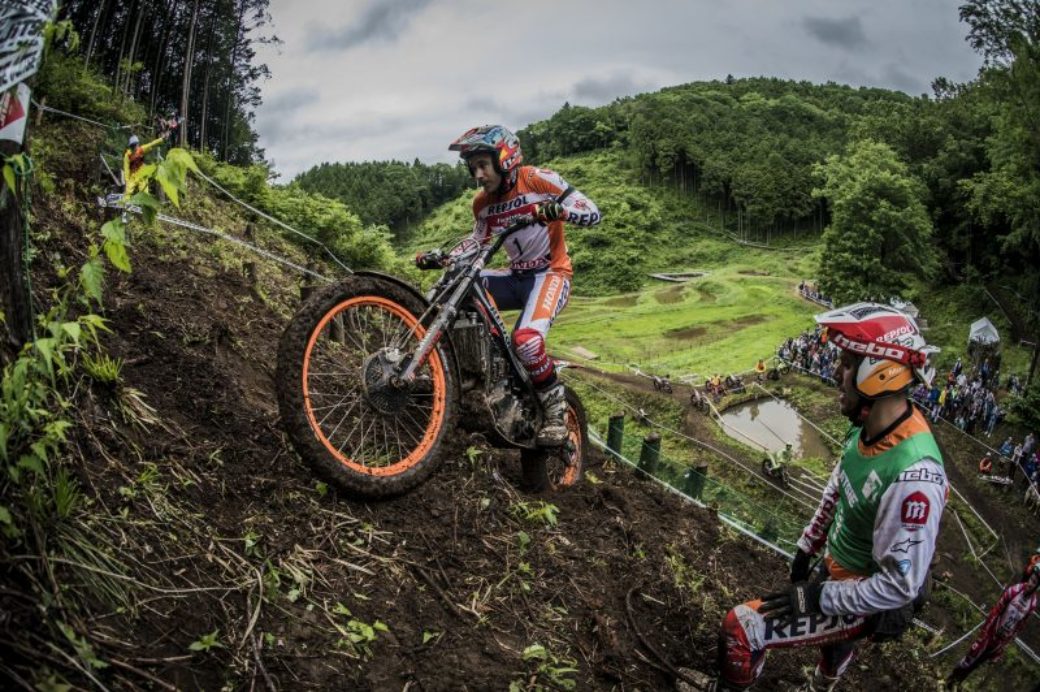 It was the the first of the two-day Japanese TrialGP held at the Twin Ring Motegi circuit. Fifteen sections over two laps were to decide the occupancy of the top step of the rostrum.

On this occasion there was no discussion – a dazzling Toni Bou dominated the proceedings throughout. His team-mate Takahisa Fujinami took third place on the podium.

Bou remains unbeaten so far this season since first clinching victory on January 7 in Sheffield, UK. The win today in Motegi brings his overall tally to 91, a decisive triumph in below-par conditions after recent rain had left many sections mud-drenched and treacherous.

Bou, who started as the championship leader after a win in the season’s opening event, got lumbered with a tricky course after the bad weather of the previous day. Nevertheless, like a fish in water, he made short work of the sections, finishing with a scorecard that the adversaries were simply unable to match.

Dominating throughout, the champion gave a master class in how to ride in adverse conditions to once again make off with the top honours. Bou stretches his advantage at the top yet further to twelve points over the nearest second-place rival.

Local boy Takahisa Fujinami, with the home crowd firmly behind him, lived up to the occasion. After starting from seventh position with a chance to observe some of the top riders ahead, the Japanese rider dug deep and finished the event on the rostrum. This marks the 27th podium finish for the ex-champ on home soil.

The first Repsol Honda Team member to take the start had been Jaime Busto, in a more complicated trial than had originally been expected. Busto was constantly in contention for a podium finish but picked up a few too many penalty marks in the latter stages and posted sixth overall.

With heavy hearts Toni Bou, Takahisa Fujinami and Jaime Busto, along with various other team members had signed a placard paying tribute to the former MotoGP champion Nicky Hayden, who lost his life in tragic circumstances earlier in the week.