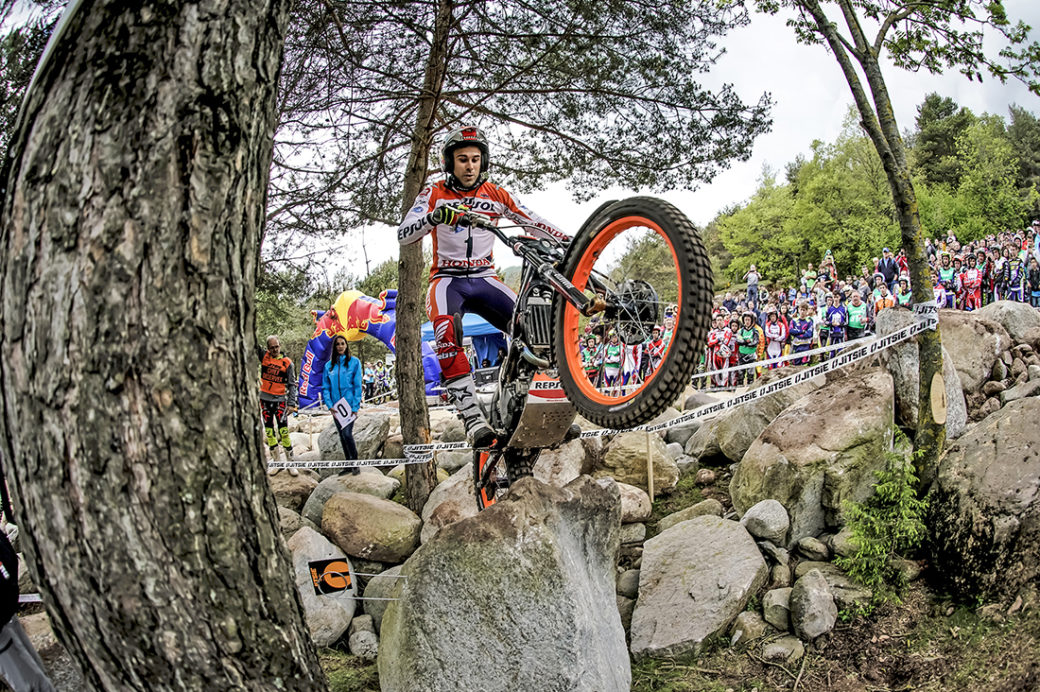 THE 2017 FIM Trial World Championship may well be starting a whole new era with a new-look series but at the end of the opening round at Camprodon, Spain, on Sunday, it was very much as-you-were in the results with the usual suspects, Toni Bou, Adam Raga, Albert Cabestany, Jeroni Fajardo and Takahisa Fujinami firmly glued in the top five slots.

For Repsol Honda team leader Bou, in a rain affected event, it was the perfect start towards landing an 11th consecutive World Championship, TRS #1 and current vice-champion Adam Raga remains in a clear second place while for Sherco’s Cabestany, Vertigo’s Fajardo and Repsol Honda’s Fujinami it was their usual scrap for the #3 plate.

And with Beta’s Jorge Casales in sixth and Repsol Honda apprentice Jaime Busto seventh it was effectively a Spanish clean sweep – as Fujigas is of course a long-time Barcelona resident.

Britain’s James Dabill was the first ‘foreign’ rider home and first Gas Gas in eighth. Dibs had a disaster of an opening lap dropping no fewer than nine fives in the 15 sections which were lapped twice, in his total of 52 but fought back well and actually posted the third best second lap score of 41, after Bou who dropped a stunning low score of just 18 and Raga on an almost as impressive 29. With just a slightly better opening lap James could easily have been celebrating a fourth or fifth place finish.

Following Saturday’s all-new Qualifying section, which decided Sunday’s starting order, the trial began in bright sunshine but a thunderstorm struck during the opening lap that drastically altered the severity of the sections.

Cabestany benefitted most as he was a very early starter after Saturday’s Qualification, and Cabes completed his opening circuit before the rain struck to lead the trial, one-mark ahead of Bou and two ahead of Raga. Fuji also gained some benefit from an early start that fate turned into a positive rather than a disadvantage.

The second lap featured heavy rain and even a hail storm making conditions treacherous but, rising to the occasion, Bou was in a class of his own with just a single maximum and even reducing his opening lap score by ten marks. This was in increasingly slippery conditions at the rocky, earthy, venue that proved extremely slippery.

Spain’s Miquel Gelabert and Italian Matteo Grattarola completed the top 10 while Britain’s second contender, Gas Gas mounted Jack Price, the 19 year-old reigning Trial2 Champion in his first season in the TrialGP class, gained points in 13th, coming back strongly after struggling on his opening circuit with 10 fives from his 15 sections.

Jack, a strong runner-up in the recent Scottish Six Days Trial, showed his mental strength though to reduce his score second time round and reaped the benefit as his rivals floundered.

It is Trial2 where the main British focus lies and in a relatively close finish British lads dominated with four strong finishers in the top 10.

Beta mounted Welsh ace Iwan Roberts showed that he will once again be a leading contender as he finished runner-up by just a single mark from Montesa’s Gabriel Marcelli, riding for the Spanish National squad.

Marcelli was super-consistent with laps of 21 and 20 while Iwan doubled his opening lap score of 14 second time round, as did the majority as conditions rapidly deteriorated, including third placed Team Italia rider Luca Petrella on the TRS.

Spain’s Francesc Moret, formerly on the factory Vertigo, now on a Montesa through the Spanish Federation, was the first lap leader on a mere nine marks before his score plummeted to 41 second time round.

East Yorks brothers Dan and Jack Peace finished in fifth and sixth places, the Gas Gas mounted siblings separated by a mere single mark. Dan, looking to nail the Trial2 title this year, was in a great position after the first lap but again fell victim to the weather and younger brother Jack almost overhauled him.

Toby Martyn made a steady start to his factory Vertigo International career and was looking good for fifth or sixth place until four maximums in the final four sections dropped him to tenth overall. The ever reliable Dec Bullock was again well in the points with a typically gritty ride for 12th that could easily have been a top 10 finish with just a little more luck.

There was further strong British interest in Trial125 as Devon’s talented Billy Green began his quest for the FIM 125 Cup with a strong second place on the Beta, behind Team Italia’s Scorpa mounted Lorenzo Gandola.

Gandola and French Gas Gas rider Hugo Dufrese were well ahead on the opening lap with scores of 13 and 14 respectively compared to the 25 of Green. But Billy, who made an impressive Trial125 debut in the British round at Tong, last year, rose to the challenge second time round to post the lowest score of the second lap, 26, just one more than his opener, as his challengers’ lap scoresrocketed to 33 and 39.

In the promising 20 strong class Oliver Smith bagged the final Championship point, on a hard fought 90 marks while never-say-die Jake Eley battled round for a finish on 127.

So, after the opening single day – as will be all the European rounds, with the Qualifying session on Saturday, – of competition, round two of the series will take place at Motegi, Japan in just two weeks on the weekend May 27/28.

The flyaways (Japan and America) will each comprise two days competition with Qualification on the Friday.