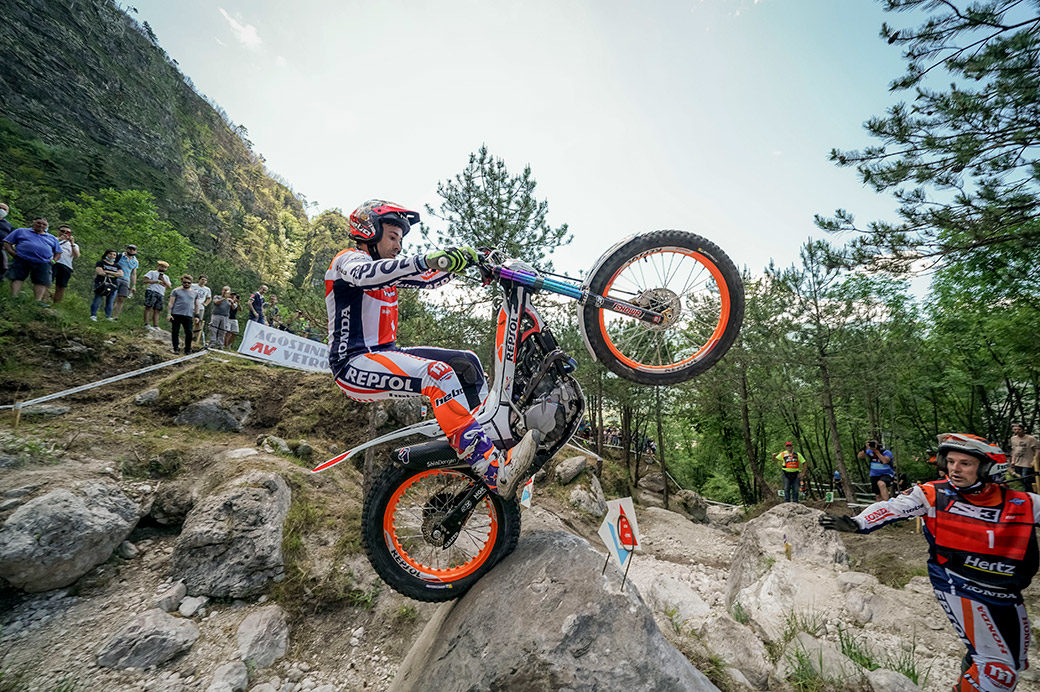 Defending champion Toni Bou (Repsol Honda) kicked off his campaign for a 15th straight TrialGP title with victory at the Italian TrialGP, the opening round of the 2021 Hertz FIM Trial World Championship, at Tolmezzo – but it was by no means a foregone conclusion.

The 34-year-old Spanish superstar – who broke his left leg in early May – led the way after the opening lap of 12 sections, five marks clear of his compatriot and two-time world champion Adam Raga (TRRS) who then staged an incredible fight back on the second circuit to close to within a single mark of his long-time rival.

In the TrialGP Women class defending champion Emma Bristow (Sherco) from Britain led comfortably after lap one but eventually lost out to Spain’s 13-time champion Laia Sanz (GASGAS) who is returning to the sport following an absence of seven years.

After the second section was cut out on the opening lap, Bou seized control and was looking comfortable at the halfway mark with his score of 12 giving him a five-mark advantage over Raga. However, Raga – champion in 2005 and 2006 – refused to roll over and staged a dramatic fight back that brought him to within one mark of Bou at the close of play. 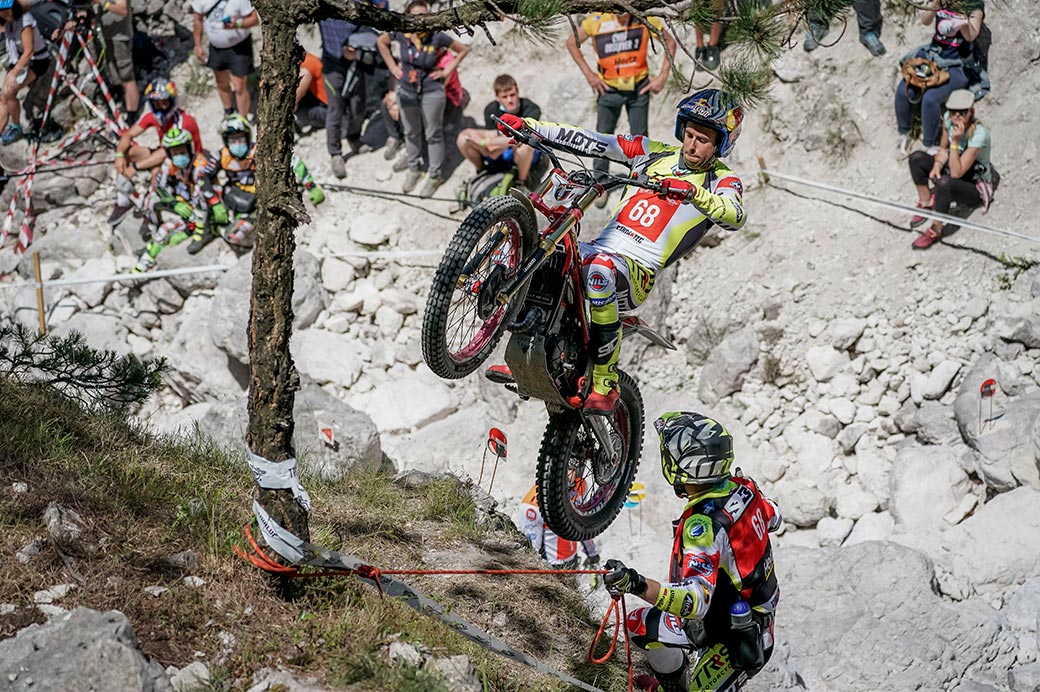 “It was an amazing fight with Adam,” said Bou. “I arrived here after my injury one month ago and my feeling is not the best but I finally took the win. It’s incredible for me and good for the championship because tomorrow is for sure a hard day for me after the injury and not training.”

Two-time Trial2 champion Matteo Grattarola (Beta) – who was returning to the premier class for the first time since 2017 when he finished 10th – completed the podium with a hugely-popular third in front of his home fans.

A distant 15 marks behind Raga’s score of 25, the Italian’s total still placed him clear of the Spanish pairing of Jaime Busto (Vertigo) and Jeroni Fajardo (Sherco).

Bristow, who has won the crown since 2014 when Sanz shifted her focus to Rally events, was three marks ahead of the Spanish rider following the opening lap but despite dropping her score by two to 13 on lap two had no answer to Sanz’s second-lap score of just eight. 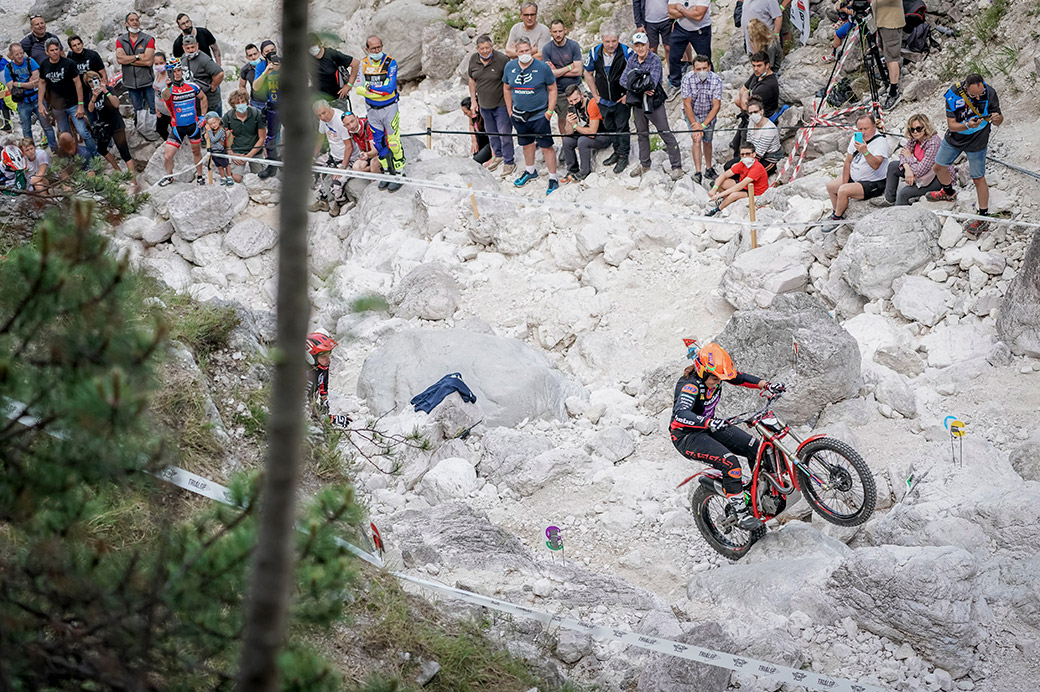 “It was really a surprise for me,” said Sanz. “I made some mistakes and I’m still not 100 per cent fit but I’m happy with the result. It couldn’t be better.”

Second and third in 2020, Spain’s Berta Abellan (Vertigo) and Sandra Gomez (TRRS) were a long way off the leaders’ pace in third and fourth with British rider Alice Minta (Scorpa) completing the top five.

In the Trial2 class British riders Jack Peace (Sherco) and Toby Martyn (TRRS) went toe-to-toe all day with Peace – whose elder brother Dan competes in the TrialGP division – coming out on top by a single point. Italy’s Lorenzo Gandola (Beta), the 2017 Trial125 champion, continued his journey up the Trial ladder to finish a career-best equalling third, five marks behind Peace.

“I’m really happy to start the year in this way,” said Peace. “I felt good all day, got settled in on the first lap and kept my head and then rode well on the second lap. It’s a great result for me and I’m looking forward to tomorrow.”

Martyn, runner-up in 2018, set the pace from the get-go and led the 35-strong field with an opening lap score of nine but a maximum on section four at the second attempt where Peace went clean proved costly and his final score of 21 put him on the second step of the podium.

“I have no words,” said Trentini, “because I started the day without expectations – my only goal was to have fun. I’m really happy with my riding. First position is incredible and I want to dedicate this victory to my son, Sebastien.”

There was another British 1-2 in the hotly-contested Trial125 class where Jack Dance (GASGAS) narrowly defeated Harry Hemingway (Beta) to emerge with a two-point advantage as Czech Republic rider David Fabien (Beta) completed the podium a further mark adrift with his total of 25.

“It’s always good to start your season off with a win because then you can gauge yourself with the other riders,” said Dance. “It was a great trial – the sections were tough because they were slippery on the second lap.”

The action continues at Tolmezzo tomorrow with round two of the 2021 Hertz FIM Trial World Championship so stay tuned.