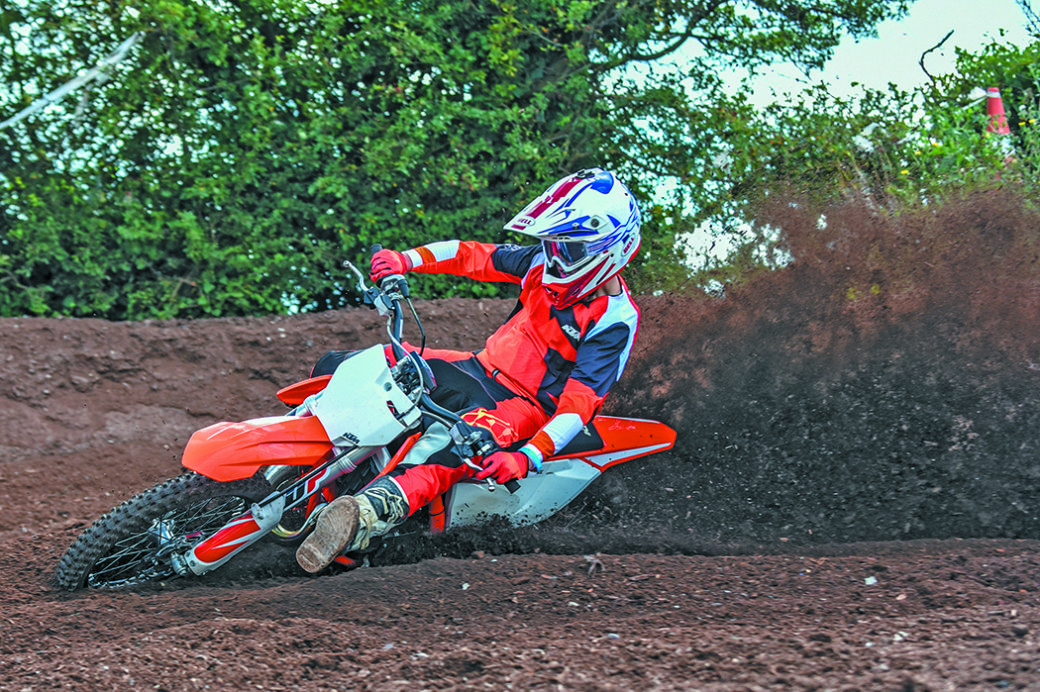 For more than a decade now KTM have dominated the youth motocross scene.

There’s been many a line-up, even at a national level, where almost every bike behind the gate has been a product from the Austrian powerhouse firm.
For 2018 KTM have completely overhauled and re-designed their championship proven 85 SX machine.

Why re-invent the wheel you may ask? Well, with the competition finally catching up – namely in the guise of the ‘sister’ brand – the Orange Brigade are striving to stay ahead of the curve to provide the youth market with the best race machines possible.
We dispatched our junior test team on a mission to find out whether KTM have succeeded in that very endeavour.

In a pursuit to provide the most fair-minded test as possible we assembled an Avengers-like team of test pilots to deliver their own unique opinion and views of the new KTM 85 from three different perspectives.

Dominic Lancett is without doubt the top 85cc racer in the country right now. The lad from Hereford has already sewn up two of the three major national titles and by the time this report goes to print Lancett will likely already be crowned the Big Wheel 85 British Champion.
The 15-year-old most definitely has the credentials (and then some) to qualify for the DBR test squad.

Dominic will be using his vast experience and knowledge of the 85cc machines to provide us with a great insight on the new 2018 KTM 85 SX before he makes the move onto a 125 next season.

James Smith has a build and talent beyond his 13 years. Smith has had a solid 2017 season and he currently sits fifth in the BYN BW 85 points chase as this is being written. Dependent on his growth over the winter, James is looking to remain in the Big Wheel 85 class for another season in 2018. Therefore, he will be looking at the new KTM 85 from a critical racer’s perspective as he gets ready for the season ahead.

Ollie Colmer finds himself embroiled in a battle for the 65cc British title. The outgoing Northern fella first wowed crowds as he battled for the AX crown in 2016.
And he once again finds himself in that position as he battles with his arch-rival, Wal Beaney, for the BYN championship.

Over the course of the season Colmer has noticeably outgrown his 65cc steed meaning that he’ll be making the jump up to the Small Wheel 85 class next season.
Ollie will be providing us with the analysis and viewpoint of an 85 class rookie.

The list of changes and revisions on the 2018 KTM 85 is extensive.
Essentially what the boys in orange have tried to do is provide the youth market with a product that has exactly the same production values, thoughts, ideas and technology that the big bikes feature. So, in short what you get here with the 2018 KTM 85 is a fully-fledged adult race machine condensed and miniaturised into an 85cc form.

The 2018 machine features an all-new chassis. The traditional spring forks have been swapped out for WP AER 43 air forks and we also see a new frame and subframe design, a new WP Xplor PDS shock absorber with new shock geometry and a new air filter box that closely resembles that on the full-sized bikes.

As well as that the bike features an improved rear brake caliper, a new throttle assembly, a new exhaust system and new radiators that are once again very similar to the full-sized machines.
The major headlines however come in the engine department.

We’ve got a new cylinder that features new ports –although the bore and stroke have remained the same. The new cylinder improves stability due to lateral head stays. We see a new sophisticated power valve system for the main exhaust port and auxiliary port.
And the new power valve supposedly drastically improves power delivery and torque.

The bike also has a new transmission to improve shifting whilst making it more reliable and lighter overall. The gear ratios have remained unchanged.
We see a new kickstart mechanism as well as a new, lighter kickstart.

The engine case and water pump cover are lighter and more compact and the bike features improved mass centralisation due to an optimised crank shaft position that is closer to the centre of gravity.
The crankshaft itself is more lightweight with optimised balancing. And finally, to match the full-sized SX range the KTM 85 now features a Kokusan ignition. So pretty much from the ground up this is an all-new machine.

But how does it perform on track? Well it’s time to hand things over to our test team. Our junior dirt bike evaluation squad let rip around a pristinely prepared Apex Motoparc to find out how the all new orange rippers perform.

This is what they had to say…

Ollie Comer
I’m moving up to the 85 class next year and I’m really looking forward to that. I was really excited to try out the new KTM and the first thing I noticed was how good the suspension was – I thought it handled really well.

Obviously the power is really different to the 65 but I like it a lot more. It’s just got more power going up to the jumps and into the corners. It was very noticeable at this track because there are a lot of corners that come out into an uphill section – the extra power was great in those places.

Even compared to my 65 I still felt that the 2018 KTM 85 was very lightweight. I’m really looking forward to putting in some more bike time on the KTM 85. I really enjoyed it – it was very light and so nice to ride.

James Smith
I’ve really enjoyed riding the bike. It’s been an awesome little machine. The suspension is a lot different to what I’m used to because the new bike obviously has the air forks.

Overall I thought it was a really nice bike to ride with smooth power and a nice top-end and bottom-end. The bike is really lightweight, so it’s easy to do whips and stuff and brilliant for cornering.

I may stay down next year or I might move up – it just depends on how I grow over the winter. If I do stay down I would like to ride the new ’18 KTM. Out of the crate I think it’s just a great bike.

Dominic Lancett
My initial impression of the bike was that it was slow to get going but very fast at the top-end of the rev-range. The bike is very lightweight. I was able to throw it around very easily and put it exactly where I wanted it to be.

I found shifting gears quite difficult to start with but I adjusted the gear lever a little and after that it was perfect. In terms of suspension I haven’t made any adjustments to that today. I think I’m maybe a little heavy for the set-up the bike has got out of the crate.

I tried a few of the big jumps and I definitely bottomed out a couple of times. Other than that, it doesn’t feel too different to the spring forks that I’m used to, it feels pretty good.

With my Husky I struggle to move it around in the air, I have to properly get my body weight over. But this new KTM makes you feel like you can really chuck it around. You just lean a little and the back end is out – you can move it exactly where you want it to be.

I’d definitely recommend the new 2018 KTM 85 to others. Mainly due to the speed at the top end. I think once the bike is bedded in a little more the gear shifting will become easier and I think you’d be able to improve things at the bottom-end. Overall I think it’s a really good bike.

As you can see our evaluation team really enjoyed riding the all-new 2018 KTM 85 SX.
Three riders at different stages in their youth careers unanimously agreed that the new bike is a solid race machine.

Perhaps the guys at the sharp end – such as Dominic – may find the bottom-end a little lacking out of the crate but for the majority of the field the new KTM 85 looks able to perform just fine.

It was clear how much fun the boys were having and it was plainly visible how light and agile the bikes are. KTM look to have succeeded in their mission to miniaturise a fully-fledged race-winning machine…