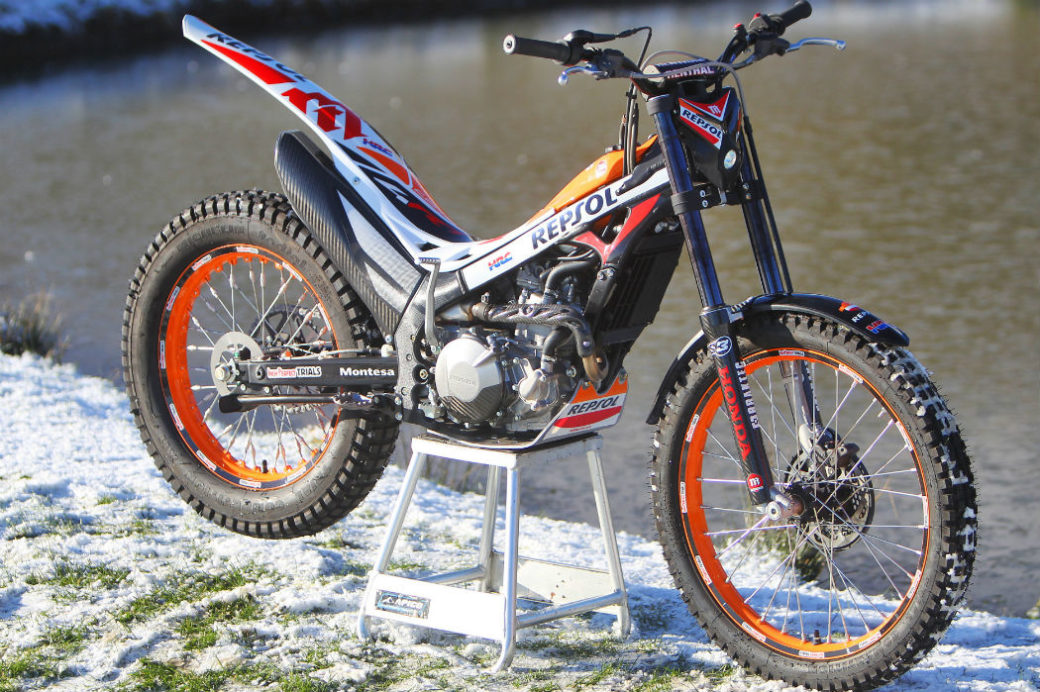 So, you want a new Montesa? With three very similar, but also very different models on offer, which one is right for you?

Perhaps you are on a strict budget and with a massive £1,800 difference between the three, the biggest and best may not be the right option.

I am a diehard 4RT fan having ridden them for the past 15 years. I have got to know them well and my current bike is a somewhat well used, standard 2012 250.

Until this test I had never ridden the standard 260 4RT, the Repsol and the 300RR back-to-back on the same sections and in the same conditions.

The test venue at Inch Perfect Trials offered a wide range of terrain, streams, muddy bankings strewn with roots and a pile of huge rocks to keep us entertained.

Over the past few months I have ridden these sections many times on many bikes and I cannot say any of them are bad. They all do exactly the same job.

Yes, the 4RTs are a little heavier and they don’t grip like the two-strokes, but if you are willing to learn and put the time in, the 4RT is a very rewarding bike to ride and once you have mastered it, will have you grinning from ear to ear.

First up was the standard 4RT 260. At £5,799 it is the cheapest way into 4RT ownership but that does not mean it is any way inferior.

The 4RT 260 may be the lowest spec in the range but I still felt comfortable attacking the big stuff.

However, this bike is not aimed at that market. It is for the rider who’s not bothered about the bling or hopping around on big rocks but wants a good solid, reliable bike, that won’t let them down.

Power delivery is smooth and being able to just roll on and off the throttle, without having to worry about the clutch too much, makes it a very user-friendly bike.

A quirk that all the 4RTs have is the fast idle speed to keep the fuel injection running.

For many clubman riders this is too much as the clutch is required in the tighter stuff to keep the speed down, but this is easily overcome with a 9t gearbox sprocket and a steady right hand.

The Tech forks and R16V complement the 4RT’s chassis well.

Even though these are supposed to be the “cheaper” option in the Montesa range, similar variants of the forks and shock have been and still are fitted to other manufacturer’s bikes as standard equipment, so to say they are inferior would be unfair.

This set-up on the 260 4rt is aimed at the more “traditional” style of riding – point it in the right direction and it will probably go!

If you are the type of rider who likes to push boundaries a little then you will need the Repsol or the 300RR.

The Repsol stands at £6,799 and for that you get the superb Showa suspension, virtually indestructible DID rims, a whole host of carbon and S3 parts, a pretty sharp Braktec brake and clutch set up and the programmable throttle body.

The Repsol feels to have a different riding position, slightly rear-biased and perhaps lower, possibly due to the Renthal bars and the Showa shock combo. This gives a little more leverage through your legs, allowing you to really squash the rear tyre into the terrain to maximise grip.

The Repsol turns and handles as well as anything out there – with its planted feel it holds your chosen line very well, the Showa forks are as reliable as ever, a slightly firmer feel than the Techs makes moving the front around a little easier and you feel like the forks always have something left in reserve.

The strong motor gives plenty of pull in whatever gear you want, the power feels stronger and sharper on both maps than the standard 4rt 260 and the Showa stuff inspires you to push on harder.

All in all, this bike will suit the clubman as well as the experts.

At £800 more than the Repsol, you would expect something special from the 300RR and it does not fail to deliver.

This bike is not for the faint-hearted. Yes, a clubman would be more than happy on this, but to get anywhere near what this is capable of, you would need to be trying really hard and on top of your game. The engine is strong, making the already good 260 power plant into a wheelie machine. The exhaust note is also much deeper; reminding you that every time you blip the throttle that you have got some serious grunt to hand.

The rear end feels very much like the Repsol but, the front has changed completely.

Tech forks and the S3 wheel combo makes the front end feel really light. You can tell immediately that this bike is at its happiest when stood on the back wheel bouncing over boulders.

Perhaps some of the Showa’s planted feel has been lost on the front, but you do not ride around corners on this bike – you hop, jump and flick it around.

The 300RR is the bike choice if you have money burning a hole in your pocket or if you are really wanting to progress to the next level of riding.

It should appeal to the younger generation or riders as an alternative to the run-of-the-mill strokers.

But for some reason the whole 4RT line up does not capture their attention, which is a shame as we all saw what Toby Martyn could do on one last year.

Overall, the Montesa line-up has something to offer for everyone – with the exception of the youth classes.
So, which is the best?

The standard 260 4RT offers great value, it will do everything I can do on the other two but perhaps lacks composure on the bigger obstacles.

The Repsol will do anything you ask it and the component quality is second to none.

The 300RR is a lot of bike and way more capable than most riders, myself included.

My favourite is the Repsol, but if money was no object then a mutation between the Repsol and the 300RR would be my choice.