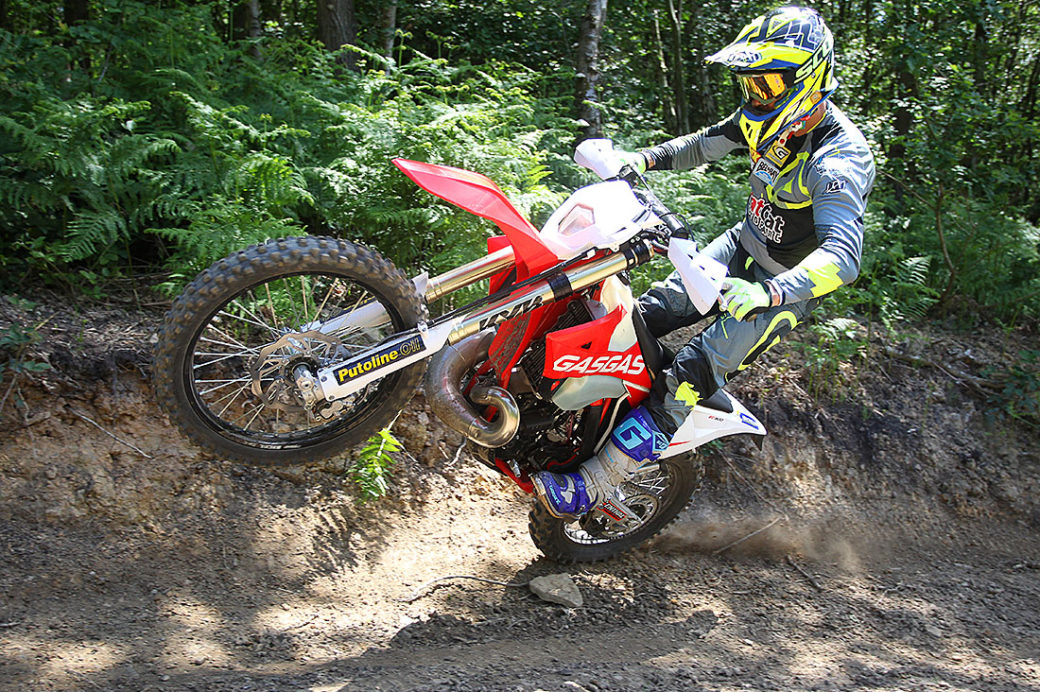 THERE is no better way to introduce the 2018 Gas Gas enduro than in the Girona factory’s own words: “Gas Gas has completely reinvented its iconic Enduro, the new EC/XC demonstrates total commitment to the very highest quality components. With new frame, engine, suspension, geometry and an endless list of new parts”

There you have it, GG has come up with a brand-new model that is still very definitely a Gas Gas, it is bright and red and in your face and it is just dripping with quality.

The basis of the model – which during its inception was named the Phoenix Project at the factory after the legendary bird that arose from its own ashes – is a single backbone steel tube frame.

A redesigned two-stroke motor, with power valve and electric start, sits neatly in there and is then surrounded by all that quality componentry.

Kayaba suspension front and back with plenty of adjustment to suit all rider sizes and riding styles is a great start, the rear operating through a new linkage system and redesigned and lighter aluminium swinging arm.

The motor breathes through a Keihin PWK 38mm unit, which in turn draws air through a genuinely quick-change (no tools) filter behind the side panel and an exclusive FMF Powercore exhaust gets rid of the gasses.

All this sits in an all-new aluminium rear sub-frame. The hydraulically operated clutch is controlled via a Magura master cylinder

The bike rolls on superb Excel rims, the completed wheels fitted with NG brake discs which in turn are stopped effectively by Nissin calipers.Aggressive looking new plastics have the graphics moulded in so you won’t see your nice shiny stickers rubbing off in record time and your shiny red and white steed looks like it will stand up very well to its expected hard life – well, you bought it to ride didn’t you?

Having rapidly re-established themselves in the trials market Gas Gas really has done a stunning job on their re-entry into the equally competitive world of enduro, the bike is good looking, quality-built and TMX tester MARTIN CRAVEN will tell you if it goes as well as it looks….

Says Martin: “Not often does a bike manufacturer change a model as much as Gas Gas have changed their enduro offering for 2018.

And I don’t think it would be a surprise to anyone to say that frankly, it was very much needed.

Before the Girona factory was hit with the well-documented problems the bikes had fallen behind rival offerings simply due to lack of development with issues including lack of power, below-par suspension and a fairly bad diet.

That’s now ancient history. The 2018 300EC two-stroke I have just tested had very little in common with their past models and I can definitely say that the all-new, slimmer, MUCH lighter, better-equipped Gasser is now very much a legit enduro weapon.

From stock the 2018 Gas Gas comes pretty well kitted out with a raft of snazzy after-market goodies, such as Renthall Twinwall bars, full FMF exhaust system and quality KYB suspension front and rear, which on its own is a massive plus to the already looking good not to mention good-looking enduro machine.

With all these changes, it was pretty much like riding on a entirely new bike compared to previous models. The one characteristic that did carry over was how the motor produced its power.

There’s definitely more snap and increased power curve for 2018 but there’s still that familiar Gas Gas feel about the engine which I really like.

Yes, it’s got more snap to it but hasn’t lost any of its torque and chuggability that lets you crawl all over obstacles without fear of stalling or the motor letting you down.

It’s lost a LOT of weight for 2018, and this has a lot to do with how responsive and stronger this bike feels. I honestly think the weight savings are allowing the motor to not work as hard to get the bike moving.

The 300EC’s power comes on almost immediately but there is very little hit or jolt…it is extremely smooth and usable.

It builds up power in a linear fashion to a very strong upper-end of the rev range, once through the mid-range there’s no need to ring its neck as it doesn’t make that much more power in top, but to be fair I did test the bike in very tight and technical conditions.

Gas Gas really have gone to town on the 2018 300EC, especially in the weight department. There’s also a newly-designed aluminium subframe which utilises a rapid-filter removal system – no tools needed – along with a lighter tank and seat combo, again shaving pounds of the bike.

All this weight loss is helping the handling and stability of the bike, and of course helping it stop quicker with its Nissin brake calipers and the impressive NG discs fitted onto a pair of Excel wheels.

Keeping the bike rolling is a set of very proven Metzeler Six Days tyres, which incidentally worked very well on the day. Riders will have their own favourite tyres but there’s nothing wrong with the stockers.

On previous models the gearboxes weren’t always exemplary but now they have introduced a new cog system, chucked all the plastic bits in the bin and things are definitely heading in the right direction – along with a snazzy Magura clutch cylinder.

With all due respect, I wasn’t a big fan of the Marzocchi fork and Reiger shock combo on previous incarnation, mainly because of the softness and inconsistency.

For 2018 Gas Gas has turned to the Japanese for its suspension and nailed KYB front and rear.

It’s 10 out of 10 for Gas Gas for this change as the suspension worked gloriously throughout and with extensive adjustments front and rear you’re never far away from a perfect feel.

Overall the fork has good balance of performance and comfort, it didn’t blow through the stroke and it wasn’t anywhere near as soft as previously.

We did the odd half a turn tweak on the fork damping adjustments during the test and I could tell the difference and soon got it pretty much bang on for the conditions and terrain.

The shock also worked really well and wasn’t reacting or bouncing too much when popping over rocks or ledges.

This was great for confidence and traction. Very impressed.”

With the new frame and bodywork the 2018 300EC does feel slimmer and definitely lighter than previous bikes. Not that the previous models were that bad, it’s just now it feels normal like, how a 2018 enduro bike should feel.

This translates to a more agile, nimble feel out on the trails, which makes it easier to flick about and change direction effortlessly.

And it was nice to see that the Gas Gas hasn’t lost its stable, planted feel, as some bikes do when they go on an intensive diet.

With the turbulence at Gas Gas HQ now well and truly behind them, the Girona concern has done a fantastic job in getting such a well-sorted brand-new model out.

They have now put themselves legitimately on the enduro map once again.