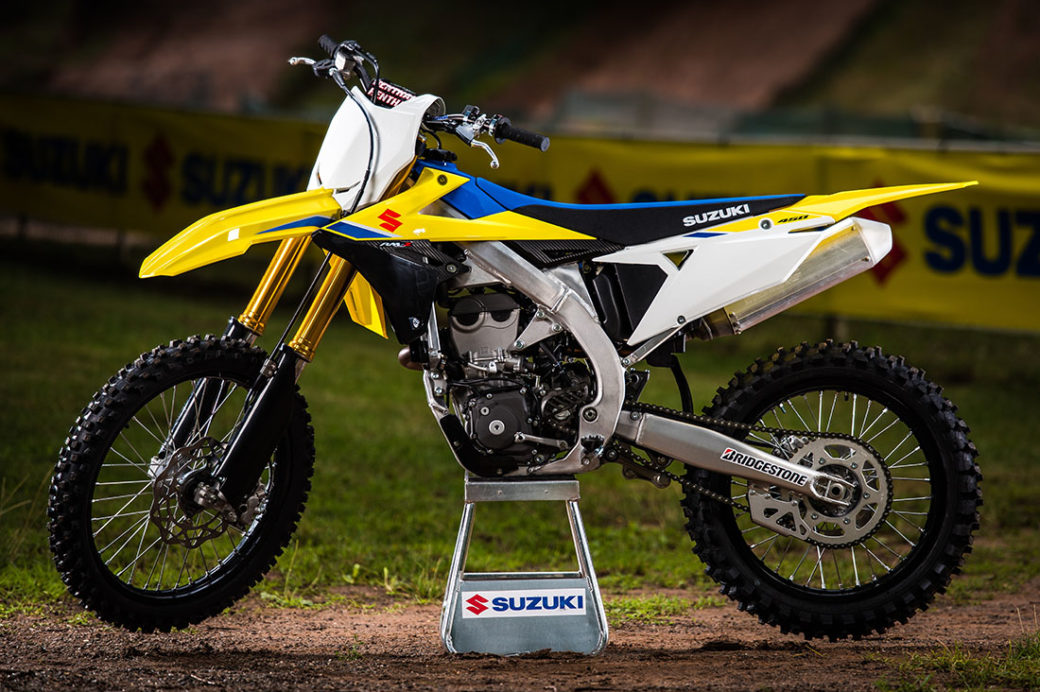 AS we rip our way through the 2018 motocross test schedule one thing remains constant. The colour! If you like red you buy a Honda, orange a KTM (or its Husky sibling if you don’t like orange!), green for Kawasaki and blue for a Yamaha (or TM).

And if you are into yellow, there is of course only one choice. Suzuki.

On the face of it, the inevitable annual update of sharper plastics and graphics aside, not a lot looks to have changed on the latest Suzook.

It still sports that twin-beam ally frame (all the Japanese offerings follow this route – KTM and Husky remaining true to tubular steel chassis) housing that meaty twin-cam, five speed motor with the latest Showa forks and shock tacked on front and rear.

But while it all looks very familiar at a glance, Suzuki are claiming the 2018 RM-Z450 as an all-new model having given the whole machine a re-think.

The chassis may look familiar but has been re-designed to make the handling quicker and sharper with a host of small changes while the engine power has been smoothed-out via improved electronics and fuelling.

At the heart of this is a much faster and more poweful ECU. Not something really noticeable to the naked eye so you just have to take Suzuki’s word for all that and get out on track in order to appreciate all the work the engineers have undertaken.

Perhaps one surprise omission, considering all the redesigning that has taken place, is an electric start in order to fire-up that motor with the touch of a button but in 2018 you will just have to keep exercising that right leg in order to boot the big single into life.

On the suspension front, one big change is a reversion to conventional metal springs in the 49mm Showa forks, Suzuki having ditched the air-sprung versions – which you either loved or hated – used in the 2017 model. There’s also a brand-new Showa rear unit which shares technology with the company’s awesome GSX-R Superbikes so there’s plenty to think about in the suspension department.,

Says Martin: 2018 model MX tests are coming in thick and fast right now with the Japanese and Euro factories all vying for supremacy. Next in line in the manic schedule is the eagerly anticipated Suzuki RM-Z 450 2018 model.

Now in its 12th year of production, Suzuki have completely revamped their mighty 450 to give its design a fresh new look and to hopefully make both the engine and chassis perform better than ever.

Northern France, right on the German border, was the chosen venue to let rip on the yellow peril, a lovely, hilly French national track.

Unfortunately, on this particular day, the weather resembled more like a winter day in old Blighty, cold and wet, rather than sunny Europe! This wasn’t what we had ordered but in reality it is what you get when you go motocrossing in GB!

For 2018 Suzuki’s mantra for the RM-Z450 is ‘The winning balance’ which fundamentally has evolved the performance elements of ‘run’, ‘turn’ and ‘stop’ attempting to achieve the ultimate level of balance between the race-proven performance of its engine and chassis. The changes made to the engine include a higher maximum power output and improved throttle response and has achieved better output at high revs and more powerful output torque at low revs, plus a faster, more controllable throttle response.

Increased fuel pressure by 17 per cent over the current model gives a more effective mixing of air and fuel which accounts for the performance boost.

Updates have also been made to the already proven (S-HAC), Suzuki’s holeshot assist control and its traction management system.

The all-new frame and swingarm for 2018 – which includes a new seat rail, make the RM-Z450 much slimmer and lighter, optimising increased cornering and stability, and performance changes made to the suspension front and rear were also significant.

It adopts an external damping circuit, because it does not cause variations in the balance of the pressure, which in turn realises improved responsiveness of damping force for better absorption over braking bumps.

Suzuki have reverted back to coil spring front forks to replace the air fork on last year’s model.

While both fork legs adopt the same mechanism, with springs in each leg, each of the components has been redesigned to be larger for greater rigidity and more responsiveness.

So, enough talk, let’s have some action. After my initial laps of the track on the RM-Z450 it became very apparent that the new engine has a really linear power band.

I didn’t notice any part of the rev-range that was lacking or conversely landed me with a big kick up the backside from a mid-range power surge. Because of this smooth delivery, I could ride the bike for the most part pretty much exactly how I wanted.

It would tippy-toe around tight corners in second and sometimes third without any stress. This ability to lug the bike at low revs was nice for me, especially in the wet and very sloppy conditions we encountered in France.

Pushing this, there were a few times when I dropped the revs too low but a slip of the clutch and immediately the bike was back on track, although obviously on a hard pack, fast track when you are pushing hard all lap long this wouldn’t be necessary.

Also changing gear on the bike was as slick as ever, just as you’d expect from Suzuki, and didn’t require a big effort on my part to grab a shift under any load.

Keeping in line with changes, the RM-Z450 now has a bigger front disc bolted on, and the effectiveness was noticeable on the steep downhills and all very controllable. And in the slippery conditions we’d have been in trouble if it wasn’t powerful and smooth!

After a couple of sessions the track became slightly drier (and I mean slightly) so I was able to push a bit more and really test the cornering ability of the 450.

Suzukis have always been able to turn and for 2018 the RM-Z450 hasn’t let the side down.

Entering corners was fabulous and with the smooth power of the 450, exiting the corner was a breeze too.

The bike really does feel as nimble and slim as it looks, the seating position feels just right for maximum control, while the footpegs have been positioned slightly forward, directly under shoulder position.

Moving into the suspension, the rear shock had a somewhat firm feel as delivered that was mostly noticeable in the beginning of the stroke, almost as if it wasn’t very progressive in this area, and wanted to kick me off the pegs a couple of times.

The new forks handled braking bumps and obstacles well, especially the harder landings and I didn’t feel any negative feedback in my hands. Straight after the first session I was in the pits and having the Showa technician alter a few things on the rear and from there on the bike was just fine and the rear was now matching the excellent front end.

So you might just need to fine-tune your shock, depending on your weight and riding style. Suspension is such a personal thing but it is so worth just taking the time and effort to get it right.

The overall feel and handling of the RM-Z450 can best be described as 250-like, I felt I could put the bike wherever I wanted with only the slightest bit of rider input.

With the track being tight and technical the RM-Z450 was excelling, especially when entering ruts, the bike able to be pointed in any direction.

In short, after my time spinning laps on the RM-Z450, I have to admit I was very impressed with the bike overall.

The chassis is nimble and easy to move around without it being too rigid, while the engine offers a ‘no surprise’ smooth (never forgetting that it is still a 450) type of power that is more than plentiful, yet predictable.

The suspension is firm and absorbs all the big hits but also soaked up the small bumps too.

Suzuki really have an ‘out of the crate’ racer now that can compete with anything on the track.