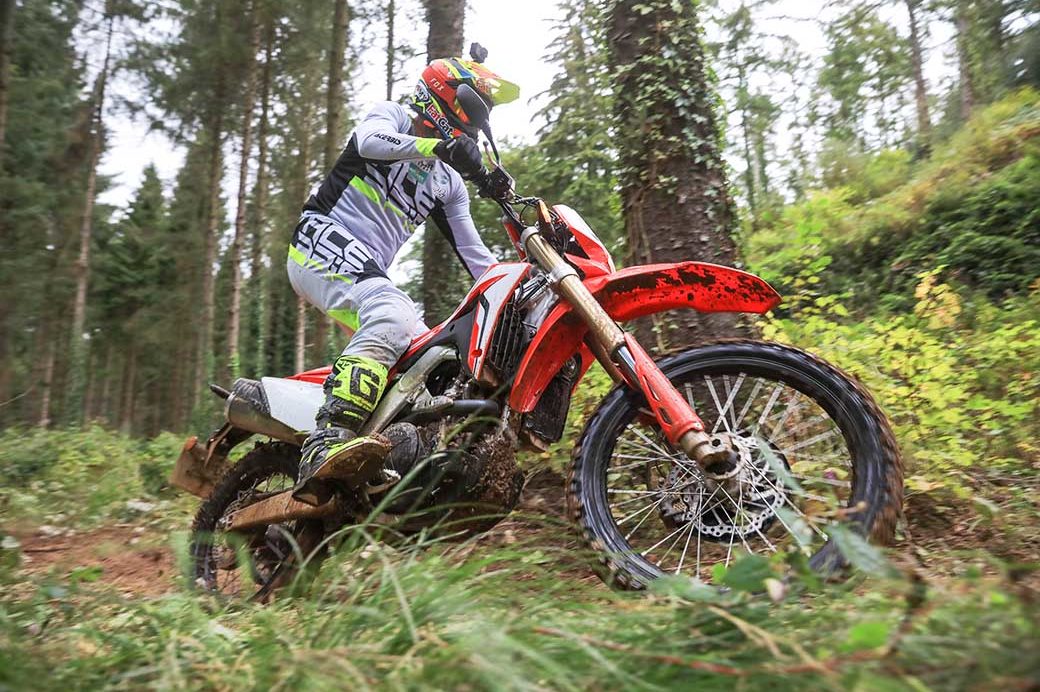 The Honda CRF450L is brand-new for 2019, based closely on the full-race Honda CRF450R, and joins the well-established CRF250L in the dual-sport market. It is a street legal machine that is happy to sit on the road at the legal limit but is equally at home on the trail or in a club enduro.

But as close as the 450L is to the awesome 450R, the motor is completely revamped with wider crankcases to accommodate the six-speed gearbox. It sports electric start, and the electronics are totally different to comply with all road-legal considerations, particularly for the American market.

So you get the tried, tested and developed aluminium chassis and swinging arm and even touches like a titanium fuel tank – how many bikes boast that – plus the advantage of really good spec Showa suspension. This bike is not built down to a price, it is built up to a spec. If you are in the market for a dual-sport then this Honda is aimed right at you…

Martin Craven got first dibs for a run out on Honda’s new dual-sport offering – with the added bonus of a day with Dave Thorpe putting the 450L through its paces in the Devon countryside. Here’s what Martin has to say…

This modern dual-sport should have been built years ago by Honda, but now that they have finally got round to producing it, it doesn’t disappoint. This is a bike that will comfortably reach 75mph on the road, leading you to your favourite off-road playground so you can play in the woods and mud all day. Honda has finally given the people what they say they want. 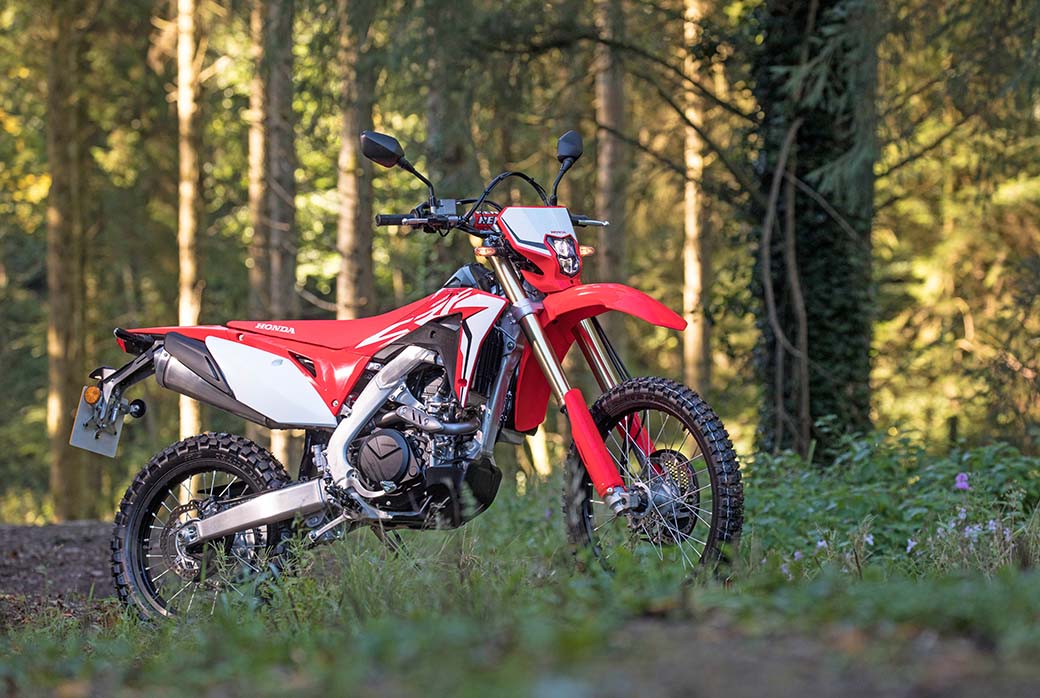 For a beefy 450, the CRF450L is nimble handling and sports good power delivery,with a modern MX-inspired look and, of course, the excellent build quality you would expect from Honda. This is a very attractively-styled dual-sport bike with ample ground clearance, high mudgards and super plush suspension, which just cries-out to be taken into the woods and on the trails.

Honda have pitched this bike somewhere between its well-established trail bike sibling, the CRF250L, and the big-hitting Africa-twin Adventure bike. This isn’t a fully-fledged enduro bike, it’s a trail-friendly dual-purpose bike ready for dirt and even the city.

I think Honda have done a great job in producing a bike which looks like a full racing off-roader but with a quiet, softly-spoken side to it. The balance in chassis and power delivery for each discipline is superb in bringing the novice dirt guy and the tarmac guy together nicely.

After a short trip on the road to get to our first set of woods its hard to imagine that this Honda CRF450L produces a mere 25bhp, it really doesn’t feel like half the power of 450R or 450X for that matter.

Once on the dirt it was straight into a fast flowing but very greasy trial and my first initial thoughts were that the dual IRC tyres are a bit slick as I two-wheel drifted into the hedgerow! To be honest though, the hardpack Devon clay would have tested most tyres out there but the further we delved into the woods the more conditions improved and suddenly the tyres were spot on and I couldn’t fault them at all on the loamy soil.

First thoughts on riding the 450L were how agile the chassis is – it’s not too tall or rigid but super rider-friendly and familiar. It obviously isn’t as sharp or aggressive as a CRF450R, which in my eyes is a good thing, because this bike is aimed at an entirely different market.

In fact there isn’t a big hit off the bottom or aggressive wheel spin, and there’s no major stalling issues to catch the novice rider out, just a really smooth power delivery off the throttle which transends over the tree roots and rocks.

If I was to be super fussy, I would probably change the tyres – depending on the terrain to be ridden – and chuck a set of hand guards on and then she’s ready to go. And just because its a dual-sport bike don’t think we just went on a little green lane ride. Oh no! we there to push the boundaries and went for some really gnarly sections to explore the limits.

After all, our tour guide for the day was none other than three-times World MX Champion Dave (the Berkshire Bomber) Thorpe, who still flies by the way. As you would expect, the brakes and clutch components on the Honda were second to none as were the cockpit accessories that you don’t get on an MXer.

With only having 25bhp and a great big silencer on the back, you would think the bike might be somewhat soulless. In fact it is quite the opposite, there’s so much torque in the engine that it climbed through the Devon countryside like a buzz saw.

One thing to mention is how quiet the 450L is. It was a really pleasant experience to ride from tarmac to dirt and enjoy the ride without it blowing your eardrums out. As you can imagine the 450L is somewhat heavier than the R and RX models, but don’t let that put you off, it isn’t something you really notice when riding, especially with the new generation which feels super light and nimble between your legs for a dual-sport bike.

Ordinarily, this type of bike comes fitted with pretty basic suspension which is set for going up and down a low curb in town. But here is where Honda have played their trump card. They have fitted Showa suspension front and back, which is based on that fitted to the CRF450R only valved slightly differently.

And what a great ride it is, nice and soft on the initial stroke then good bottoming resistance, while never going through the stroke on big hits. Honda have really played a blinder on this one. In my opinion the CRF450L is a bike for all parties, going to the shops, delivering parcels around the city, and of course racing your local enduro at the weekend.

I would have to say “Yes” to all of the above…