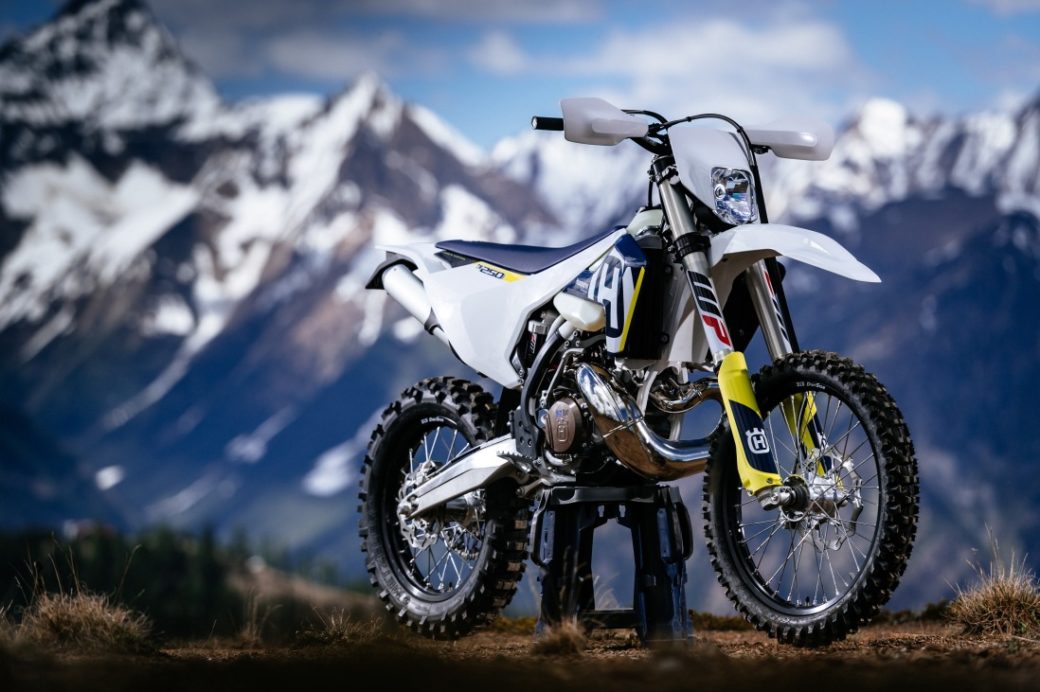 HUSQVARNA, along with their KTM siblings, have really upped the ante for 2018 with the introduction of ground-breaking, new-generation, Electronic Fuel Injection (efi) on their 250/ 300 two-strokes.

Sure, other manufacturers have tried a more basic efi on two-strokes before – effectively best described as an electronic carburettor feeding fuel/ air mix conventionally into the crankcase via a reed-valve – but Husky/ KTM have really moved the goalposts.

The motor, which still features an exhaust power-valve, draws air conventionally into the cases but the efi doesn’t add the fuel until the air is on its way into the combustion chamber via the transfer ports.

A pair of injectors squirt the exact amount of fuel needed ‘down’ into the air-stream of the transfer ports for maximum atomisation.

And the fuel injected is neat petrol, there is no messy pre-mix as the engines feature positive forced lubrication to main, small-end and big-end bearings and piston/ cylinder walls via an oil pump which is fed lubricant from a separate oil tank.

The plastic reservoir is under the seat and oil is added via a cap in the top frame tube.

Sensors inform the ecu of the state of play in the engine room at all times so that the brain sends exactly the right amount of fuel and oil into the works.

The aim is to get the two-stroke motor through ever-tightening emissions regulations but as in order to do this you achieve improved efficiency, the bonus is better performance and more fuel efficiency.

Unlike with carburetion there is no need for jetting changes to suit the weather or altitude, as the system takes all this into account.

The 50/300 engines also feature a balance shaft for even smoother operation and less fatigue-inducing vibration, plus inbuilt electric start, something which is long overdue from all manufacturers.

When did you last see a car with a starting handle? 1960?

Push-button starting is a long, long, overdue standard fitment and really comes into its own out on the trail, particularly if you stall the motor on a hill when you are absolutely hanging!

The rest of the motor is conventional, with hydaulically-operated clutch and slick six-speed gearbox.

The Husky looks fresh and slick, with its white bodywork that includes a quick-change air filter with no tools required, in order to access the element either for a check or to change.

The chassis is based on a chrome-moly backbone frame with designed-in flex for a smooth ride.

A hollow-cast aluminium swinging arm is both light and strong.

And talking of lightness, the unique sub-frame features a 30 per cent carbon-fibre mix for super strength and feather weight.

White Power suspension front and rear is designed specifically for enduro use.

On paper, these are very likely the finest, most advanced two-stroke enduro bikes ever built and made available for all. But how do they perform in real word conditions?

MARTIN CRAVEN: HUSQVARNA really pulled the trump card out this time for the test of the eagerly awaited 2018 TPI two-stroke enduro launch.

“How does Canada sound…?”

“OK, how does Panorama Mountain Resort near Banf sound?”

Doesn’t need answering really does it!

thought, “I’d love to rip my enduro bike up that piste in the summer!” Well I’m the lucky guy who got to do just that a couple of weeks ago on the show-stopping fuel-injected Husqvarna 250 and 300 two-strokes.

Does life get any better?

Selecting a ski resort wasn’t just the result of luck or indeed just picked on a whim, nor was it chosen because of its incredible beauty.

It is because Husqvarna wanted to showcase the new TPI machines by focusing on just how impressively they perform at nearly 3,000m – and trust me, a carbureted model would not work at that altitude.

Testing these two awesome-looking white and yellow machines in the mountains of British Columbia, Canada, gave me an excellent idea of how each of the bikes was going to perform in a variety of different types of terrain and elevations.

Both TE250TPI and TE300TPI are equipped with a number of new features in order to accommodate the new fuel-injection system. The engine management system (EMS) now utili

ses a new electronic control unit (ecu) that gathers information from a number of different sensors in the engine to continually adjust to altitude and temperature changes – in the circumstaces a good job really.

The cylinder has two inlet positions on the transfer ports at the back of the cylinder where the two fuel injectors are mounted.

This is all set by a 39mm Dell’orto throttle body which has a new throttle-position sensor.

Literally I started the bike up at base camp on Panorama Ski Resort and within 30 seconds it was revving clean and ticking over like a dream.

I quickly found out – not to my surprise because I was expecting it – how usable and effective the bottom end power was. I rode the tight sections in first gear during my first attempt of the four loops we did throughout the day but as I found out on later loops, second gear actually proved to be the better option, as I was able to lug the bike in a very low rev range on the countless light and very steep lower sections of the trails.

The transition from the bottom end to the midrange in both 250TPI and 300TPI was incredible at times.

When I slowly turned the throttle from quarter to half, the engine would feel as if it was running slightly rich but when the throttle went past half way the slight hesitation disappeared and on anything over half-throttle the bike really burst into life.

Thankfully most of the time I was either lugging the bike or keeping it pinned so that slight detectable hesitation wasn’t a problem at all.

The top-end power on both bikes is super strong.

We rode a real steep, shale climb which required full gas in second gear to even get a chance to reach the top.

This was a great experiment to check-out the power delivery on both the 250 and 300 – and to be fair each bike performed well, especially the 300i, as you would expect on such terrain.

The overall power difference between the 250TPI and 300TPI was very evident here as the 300TPI didn’t need as much momentum from the bottom of the climb in order to still crest the top, whereas the 250 didn’t allow for any mistakes on the run-up to have a fighting chance at making it.

The 300TPI also pulled much better throughout the climbs too, seeing as nearly every obstacle I pointed both bikes at was pretty huge anyway.

I was more than happy with how well they climbed. You have to remember that this was pretty extreme stuff at altitude we were tackling. In more normal conditions the 250 would really come into its own.

The 250TPI and 300TPI feature two ‘maps’ that are switchable, simply referred to as map one ‘standard’ and map two ‘softer’.

Overall, the power curve feels the same on each map, which is good.

The first couple of sessions I rode in map one then in the afternoon switched to map two.

In map one the bikes’ performance was definitely spicier but I found map two suited me better, especially in the steep loose mountainside where it gave me a more smooth, grippier ride and there was still more than enough power for the big climbs.

In the suspension department both machines are equipped with the WP Xplor 48mm fork and WP rear shock which are both designed specifically for enduro riding.

These are class components and I was more than happy with the performance from both ends.

The fork was very compliant on the steep downhill braking bumps and both fork and shock refused to bottom out on many of the drop offs I was faced with throughout the day.

One thing that has changed on both bikes is the braking system.

For 2018 they are now using Magura systems front and rear. The clutch is also operated via Magura hydraulics and the power of the front brake itself was good and I never found myself wanting more.

The only thing I noticed was that it faded a couple of times descending the mountain – but I was on the brakes for a long time at this extreme venue and is there a brake on the market that would withstand that kind of hammer?

Similar to the front, the rear brake was progressive and had enough power to alloow me to lock it up at any time if I needed.

The handling of both machines, as you would expect from Husqvarna, is impressive especially the 300TPI.

The 300 seems to carve itself through the single tracks really well and the bike somehow feels more nimble.

This might be down to how the engine delivers its power in a more linear feel.

However, overall I was really pleased with both bikes and how I could easily place the bikes spot on any point regardless of the situation I was in.

Fuel injectors at the transfer ports: Ideal amount of fuel in all conditions