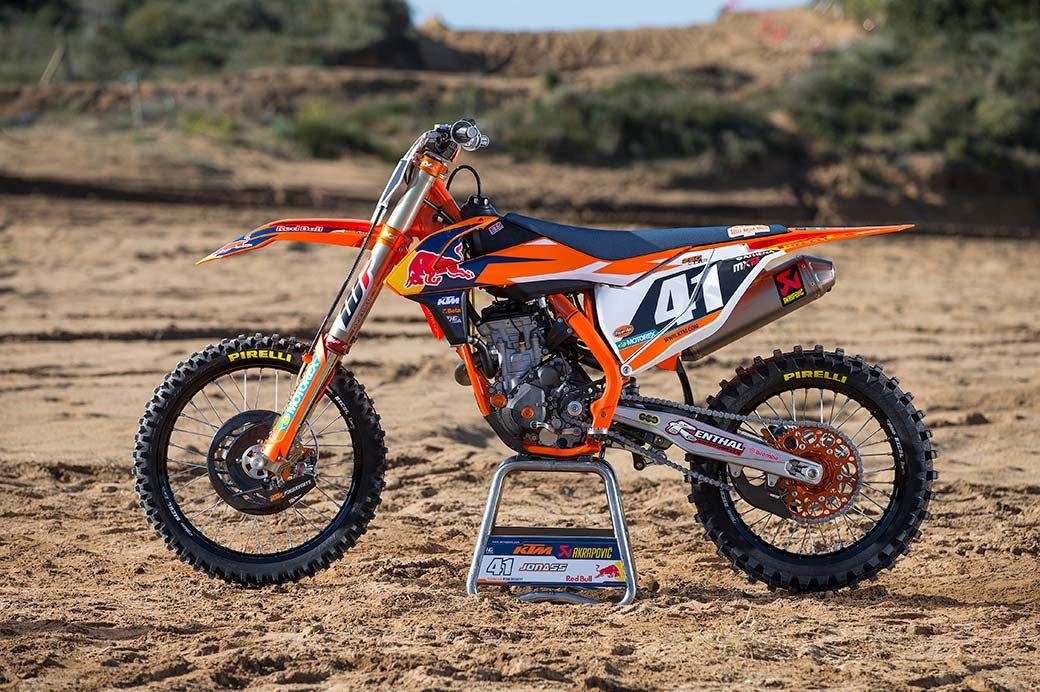 In MX2 the Latvian Pauls Jonass picked up from where Jeffrey Herlings left off, by winning his first MX2 world championship in convincing style, in what was a year of ‘firsts’ for the former EMX85, EMX125 and FIM Junior World Champion; PJ41 scored his first double moto win in Qatar, became the first Latvian to win a MX2 GP and the first from his country to win a professional world motocross championship title.

Let’s take a closer look at the machines that conquered the world in 2017.

KTM has led the way in the smaller division since the year 2000, picking up a staggering 13 world titles in the 125cc class or MX2.

Jeffrey Herlings vacated the class at the end of 2016 and his team-mate Pauls Jonass duly picked up from where he left off in what was an impressive season for the Latvian.

In the 19-round series PJ41 stood on the podium 15 times, 12 of those consecutively!

There were also 14 race wins along the way.

As for his team-mate Jorge Prado, the rookie in MX2 showed us a glimpse of what’s to come as he claimed his first race win in Trentino, an occasion that also saw him take the overall victory.

JP eventually came away with five podiums, with three of them overall victories.

In the past, the MX2 bikes at Red Bull KTM have been pretty similar, so it was always going to be interesting to see how these two offerings compared.

If you have watched Pauls Jonass closely you will see that whilst he stands up frequently, he also tends to sit quite a lot as well and this simple fact determines how the new world champion goes about getting his 250 SX-F set up perfectly for him.

With his new trainer, Marc De Reuver in his corner, PJ is learning to get off the seat a little more but some things you cannot change.

Not that that’s bad, far from it. It just means that he still prefers his Renthal FatBar handlebars (827) to sit low in the clamps, except this year they seemed to be much lower than previous years.

They probably aren’t, so maybe it was just more a case of all the attention being on his title winning machine instead of Jeffrey’s.

To a taller guy it feels slightly alien to ride with low bars and as a result you tend to feel slightly off-balance, particularly in the turns.

What’s strange is that PJ is not a short guy so for him to prefer that set-up is a little strange.

But it works for him. Maybe it’s a simple case of this was his setting when he first stepped up to MX2 and despite a growth spurt, still feels this works to his advantage, which would make more sense.

When you look at all the available information, it’s clear that his set-up is not too dissimilar to that of TC222, in that he uses the same Renthal FatBar bend (827), runs the same linkage as TC222 and the same rear spring as the nine-time champ, opting to use a 50 kilo spring at the rear. The only difference here is a slightly softer fork spring at 4.6 compared to TC’s 4.7. Looking back over the years, this has always been the case as well.

His engine is very well balanced, as has always been the case.

It is strong right off the bottom and continues to pull right the way through the range. It has an incredible spread of power and once again third gear is what makes this thing tick.

This is and always has been its strong point, with the main advantage being you don’t have to constantly keep going up and down the gearbox to get around the track effectively, leaving the rider to just concentrate on his riding.

“First we find a base setting, and we work from that. We make something for hardpack and for sand, but mostly we try to stick by one setting and ride with that everywhere, so we’re not messing around at all of the GPs, and we know where we are at. I’m a guy that rides with the bars quite low, some other riders cannot ride with my bike because they are so low. I like when the bars are more towards me, not straight.

“The levers are quite high – the bars are low, but the levers are around 90 degrees. Footpegs are Raptor in a standard set-up. In the sand I have the back of the bike lower, but more or less it’s quite neutral. I like the bike straight with no difference between the front or back. The seat is nothing special, even the handlebar is a basic Renthal handlebar. I think I run the same as Jorge for the engine power delivery – with the MX2 bike you’re always looking for the maximum power, so that’s the goal.” 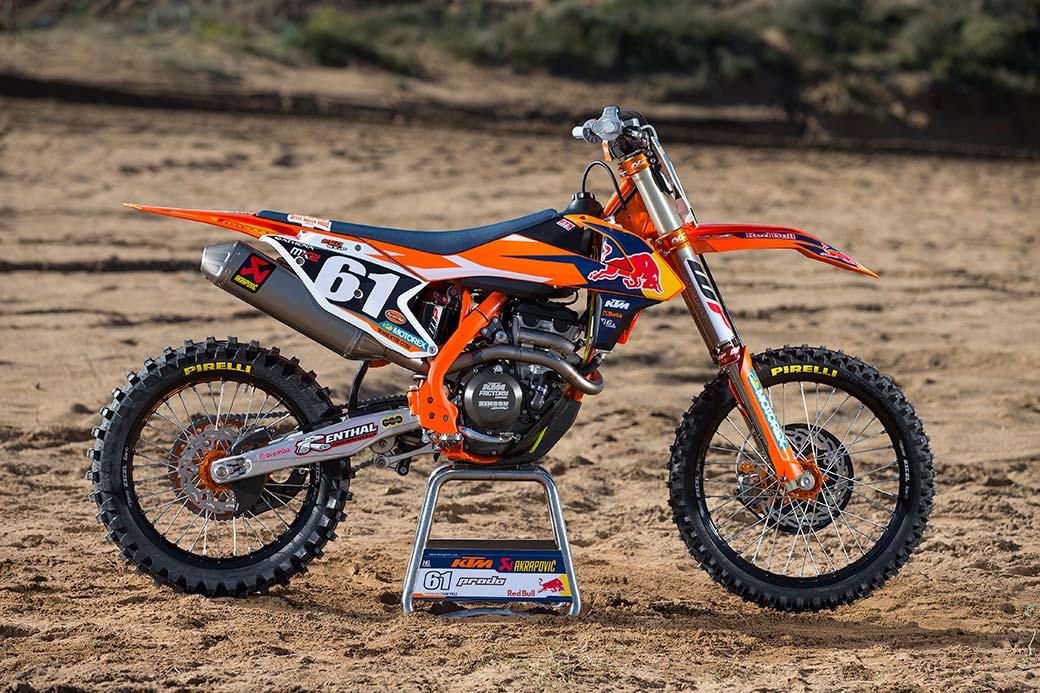 As for Prado, despite his rear shock being a tad softer at 48 kilo, the overall balance of his bike feels just a little more together.

Prado runs 672 Renthal FatBar ‘bars and a lower seat as well, and with his footpegs repositioned 5mm higher you’d expect to feel pretty cramped, but because his ‘bar shape has a different bend and sit higher in the clamp, the overall feel is much more comfortable.

The overall package allows you to turn much easier and because his bars are slightly higher because he is constantly stood up on the pegs, the overall balance feels much more together.

That’s not to pitch one bike against the other or to say one bike is better than the other. Not at all.

They are both effective, both have the same incredible engine and to both riders, they have the best handling bikes out there.

The two bikes are very similar overall with the same engine setting, same pipe, and mostly the same gearing.

Pauls runs a 14/53 whilst Prado runs 14/52 although the 16-year-old Spaniard will opt for a tooth longer every now and then.

With how Prado’s bike was set-up you could really feel the overall potential of the 250 SX-F and it’s hardly surprising that KTM came out on top once again.

Here’s Prado’s take on the Red Bull KTM Factory Racing 250 SX-F: “I think I love the colour. I think (I love) everything. It’s a combination of the whole package. The engine, how smooth it rides, and the full set-up is quite comfortable.

“I normally use a lower seat, because I was quite small in the beginning, but now I can say probably I have grown a lot. The shift lever is a bit higher than normal, because I’m used to the trials bike, as that’s how I started riding, and this is more comfortable for me.

“I use a Renthal Fatbar handlebar, plus Renthal grips. I have one position for the bars, but I usually put it a bit lower for hardpack and a bit higher for the sand. In hardpack you need to turn better and in sand you need to pull, but for the rest it stays the same. The levers are very neutral usually. It depends on the day – sometimes I like high sometimes I like low.

“At the last race I changed from Saturday to Sunday depending how I feel, and then maybe change back again (laughs). I wouldn’t say there is a huge difference from stock, last year I raced most of the year with the stock bike and this year with the factory bike.

“I think you can win a GP with a stock bike if you are a good starter, the difference is not that huge. Sure, it helps a bit with the factory bike with a bit more power but the difference is the team behind you that puts everything into it, the right set-up for you and makes everything as good as possible. With the stock bike probably you don’t have as much as this.”