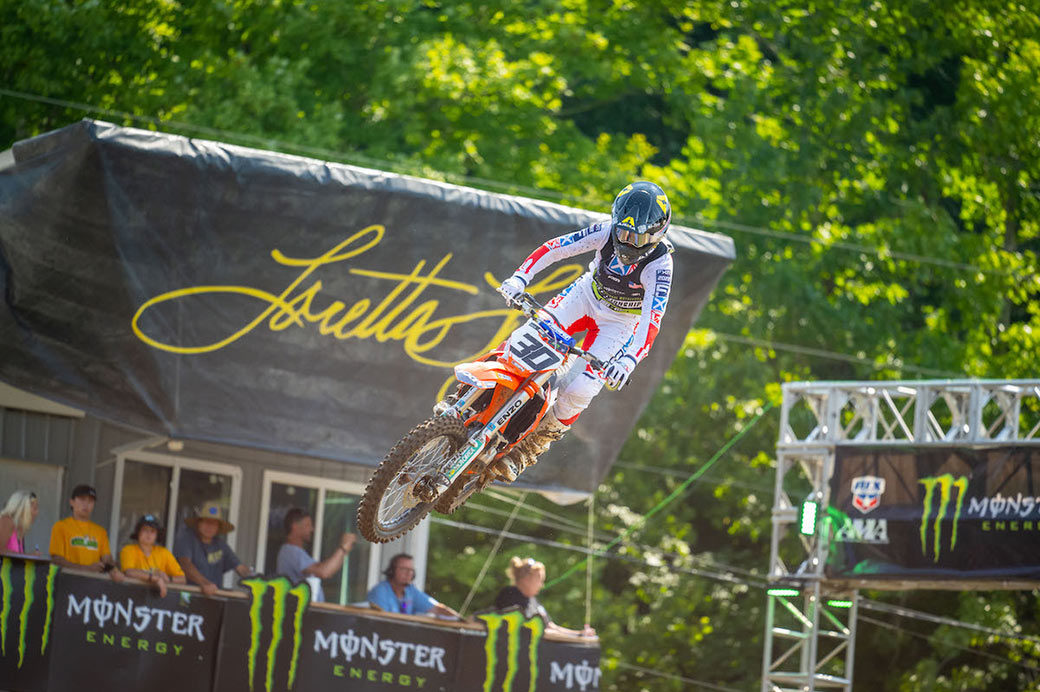 A total of 23 motos were on tap for the first day, with a bright and early start time of 7:30 a.m. Central Time, which began the weeklong journey to crown 36 AMA National Champions.

One of the most high-profile divisions at Loretta Lynn’s is Open Pro Sport, which features the cream of the crop of amateur talent. New faces have merged with familiar names for 2022, setting the stage for a wide-open battle for the title.

Coming into Tuesday’s opening moto, the spotlight centered on the rivalry between Monster Energy Kawasaki Team Green’s Ryder DiFrancesco and Team Honda HRC’s Chance Hymas. Unfortunately, the head-to-head battle so many had hoped for never came to fruition as a challenging opening lap for Hymas left him deep in the field, while DiFrancesco positioned himself near the head of the pack.

Phoenix Racing Honda’s Heath Harrison held the early advantage of Moto 1, as the STACYC Holeshot put him in front and allowed him to control the first half of the moto. After initially starting second, DiFrancesco faced some adversity of his own and dropped to fifth early on but was able to compose himself and mount a comeback. As the Kawasaki rider continued his pursuit of the lead, Hymas’ fortunes took another hit and saw him drop all the way to 35th in the running order, which effectively ended his hopes to contend. 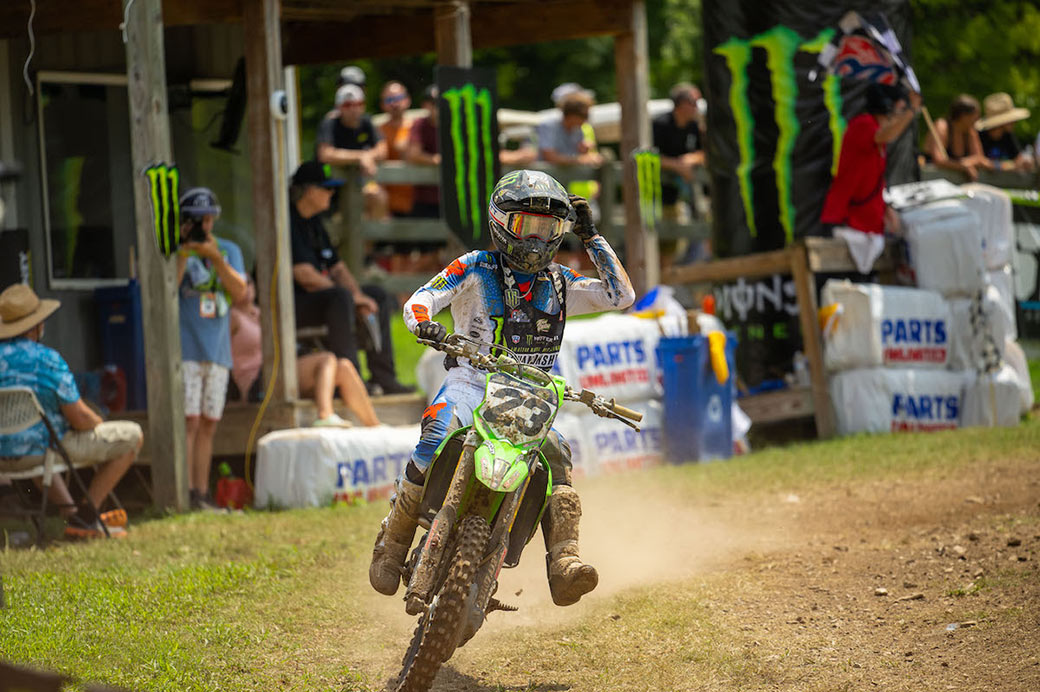 DiFrancesco methodically made his way back into the mix and soon was a force to be reckoned with as the fastest rider on the track. Harrison lost his hold of the lead to Monster Energy/SlamLife Racing Honda’s Cole Martinez, who paced the field for a single lap before DiFrancesco seized control of the moto just past the halfway point. Once out front, the California native ran away for the Moto 1 win. A hotly contested battle for the remaining spots on the overall saw dramatic position changes on the final lap, from which Pure Outlaw Yamaha’s Gage Linville emerged in second, with NSA Yamaha Factory Amateur Team’s Gavin Towers third. Hymas finished with a resilient effort for 14th place.

A pair of second-generation racers headlined the 250 B class for 2022, as both Haiden Deegan and Evan Ferry were set to make their Loretta’s debuts aboard Yamahas. These two up-and-comers were two of the favorites to challenge for the title, with Deegan riding for Monster Energy/Star/Yamaha Racing and Ferry aboard an NSA Yamaha Factory Amateur Team machine.

When the gate dropped it was Ferry who emerged with the lead after earning the STACYC Holeshot, just ahead of MJ Racing KTM’s Matti Jorgensen and Deegan. A bobble by Ferry on the opening lap halted his momentum and allowed Jorgensen to slip past for the lead and resulted in contact between Ferry and Deegan, which caused Deegan to tip over and Ferry to regain his balance. They both resumed quickly but lost multiple positions. Unfortunately for Deegan, the contact appeared to cause damage to his Yamaha and forced him out of the moto. 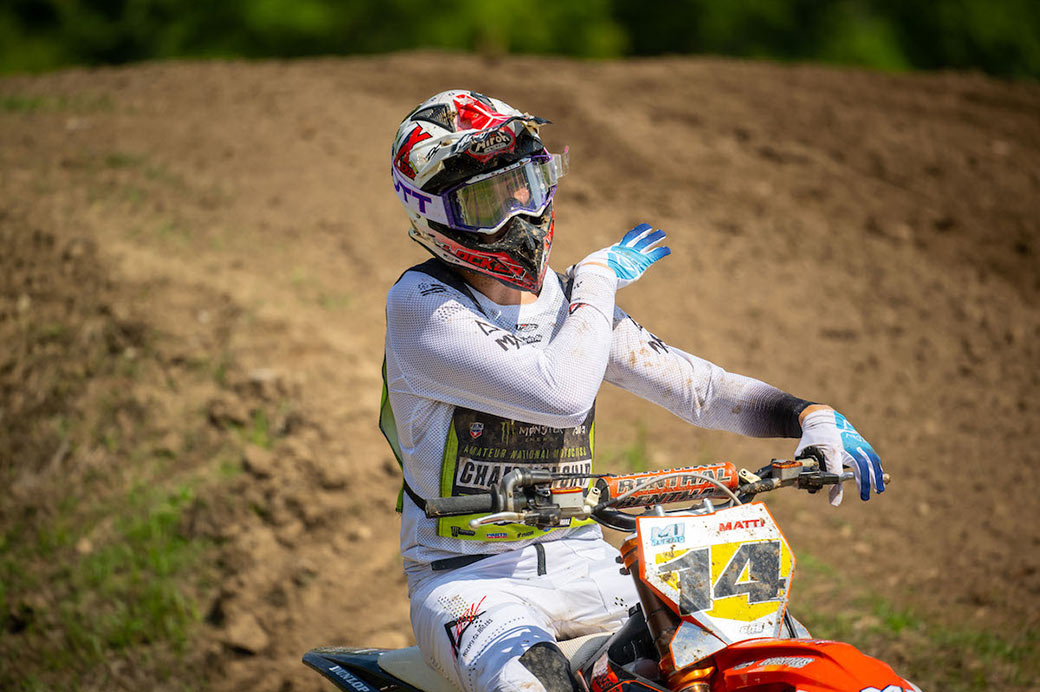 With a clear track ahead of him Jorgensen was able to assert his control of the moto out front and managed his gap on the field to take the win. Monster Energy Kawasaki Team Green’s Preston Boesplfug did apply heavy pressure in the closing stages of the moto but settled for second. Ferry recovered from his early adversity to climb from seventh to third. Deegan completed just two laps and the early misfortune with Ferry relegated him to 38th place.

Loretta Lynn’s legend Mike Brown began his quest for more championships on Tuesday, competing twice in the Senior (40+) and Masters (50+) classes. The Tennessee native has amassed seven titles since his first appearance at the Ranch in 2017 and has failed to come out on top just once in eight tries.

Brown was on point to start his journey and amassed a pair of wins on opening day, doing so in emphatic fashion. In his first race of the day in Senior (40+) Brown put himself into the lead from the gate drop and easily distanced himself from the field to take the win by more than half a minute. FXR-RMATV/MC Yamaha’s Kris Keefer did well to keep Brown honest in the early laps and ran second the entire moto, while KTM rider Hans Neel followed in third every step of the way.

When he returned for Masters (50+) Brown faced more of a challenge off the gate as Frye Shorter Racing/Triangles Cycles Yamaha’s Kevin Walker assumed the early lead. The two Tri-Cities Tennessee riders duked it out early before Brown made the pass and asserted himself out front. He quickly distanced himself from there and brought home his second win of the day by a margin of 23 seconds. Team Babbitt’s Kawasaki’s John Grewe finished in second, while RM Army Suzuki rider Barry Carsten rounded out the top three.

After the first day of racing, a budding rivalry for both the 85cc (10-12) and Mini Sr. (12-14) crown appeared to emerge between Monster Energy Kawasaki Team Green’s Caden Dudney and KTM Orange Brigade rider Seth Dennis. The young riders are two of the top competitors in the mini division and made their presence felt in both classes on Monday.

Dennis put himself in an ideal position to start the Mini Sr. (12-14) moto, as he grabbed the STACY Holeshot and assumed control of the race on the outset. Dudney wasn’t too far behind and fought his way into fourth by the end of the opening lap. As Dennis worked to pull away from the field, Dudney went to work and made a pass each lap to quickly move into second. The Kawasaki rider chipped away at Dennis’ lead and closed in to apply pressure just past the halfway point. Dudney laid down the fastest lap of the moto to make a pass for the lead and charged on to victory by a margin of nearly 20 seconds over Dennis. Third was Husqvarna Australia’s Heath Fisher.

The fortunes of Dennis and Dudney were different to open the 85cc (10-12) moto as neither rider was in contention out front. Dennis settled into fourth, within earshot of the lead, while Dudney was mired in 16th place. As the battle for the win continued to unfold in the early laps it was another rider who emerged from the fray and set the standard, Future MX KTM’s Carson Wood. After starting fifth, Wood made his charge into the lead in three laps and soon opened a comfortable lead. Determined to close the gap, Dennis dropped the hammer once he moved into second, just past halfway, and eliminated an eight second deficit to close in on Wood on the final lap, where Wood held on for the victory to make the first statement. Dennis’ runner-up was followed by Dudney in third, where the Kawasaki rider was within striking distance of the top two at the end. While they came up short of the win, both Dennis and Dudney are firmly in title contention. 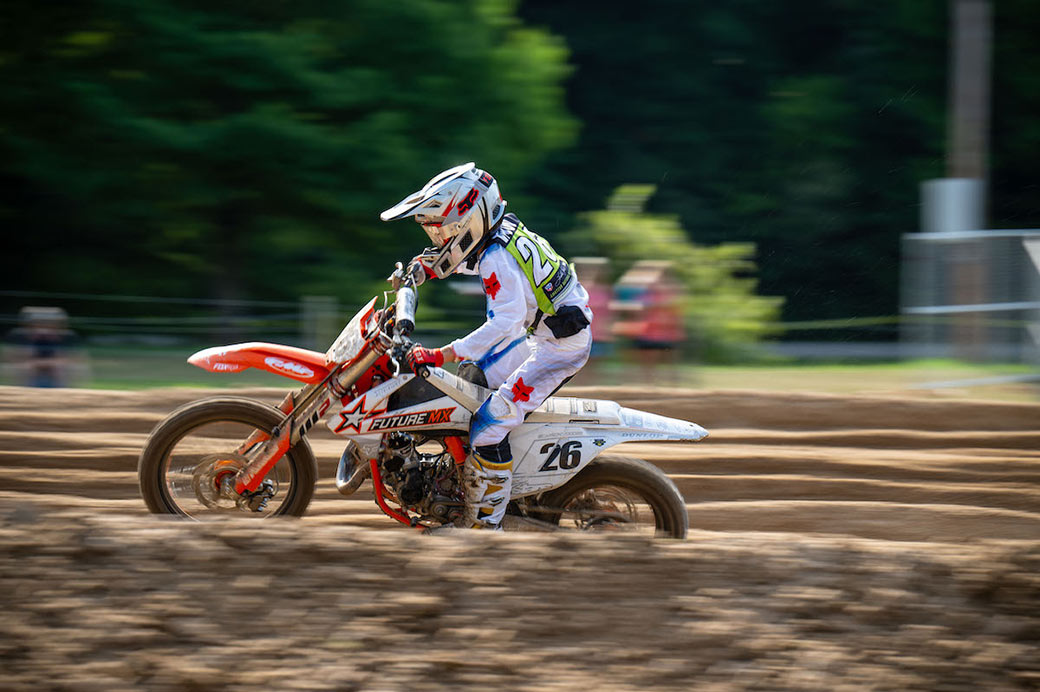 One of the most wide-open fields at Loretta Lynn’s in 2022 is the 125 Jr. (12-17) B/C class, which is filled with talent but doesn’t necessarily feature a heavy favorite. That sets the stage for one of the most compelling classes to watch unfold in the battle for the championship.

The opening moto of the class was ultimately an uneventful outing for the eventual winner, NSA Yamaha Factory Amateur Team’s Logan Best, as he parlayed the STACYC Holeshot into a wire-to-wire performance that he controlled comfortably from start to finish. It was an impressive first statement in a deep division that saw most of the drama unfold in the battle for the podium.

Based on his 23rd starting spot, Monster Energy Husqvarna’s Casey Cochran would have been hard pressed to get himself into contention, not only for the moto but also for a shot at the class title. However, the Florida native put forth one of the most impressive rides of Tuesday’s action and made an unthinkable climb to grab the runner-up spot. He surpassed 21 riders, thanks in large part to his lap times that mirrored or were often faster than those of Best out front.

The same could be said for GASGAS rider Landin Pepperd, who began his moto in 16th and latched on to Cochran on a similar march through the field. The Alaskan was relentless all moto long and his determination paid off with a third-place finish.

All told, six different riders occupied a spot inside the top three for at least one lap. Yet another indicator of the depth of the class. 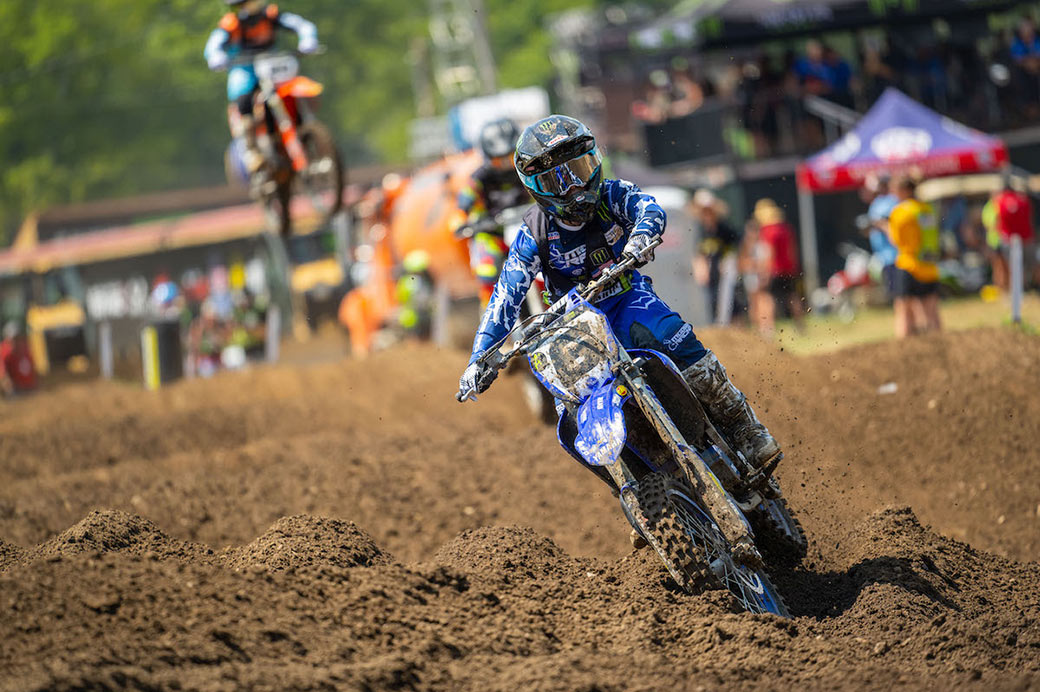 The second day of motos for the 2022 Monster Energy AMA Amateur National Motocross Championship continue on Wednesday, August 3. You can watch it live here.