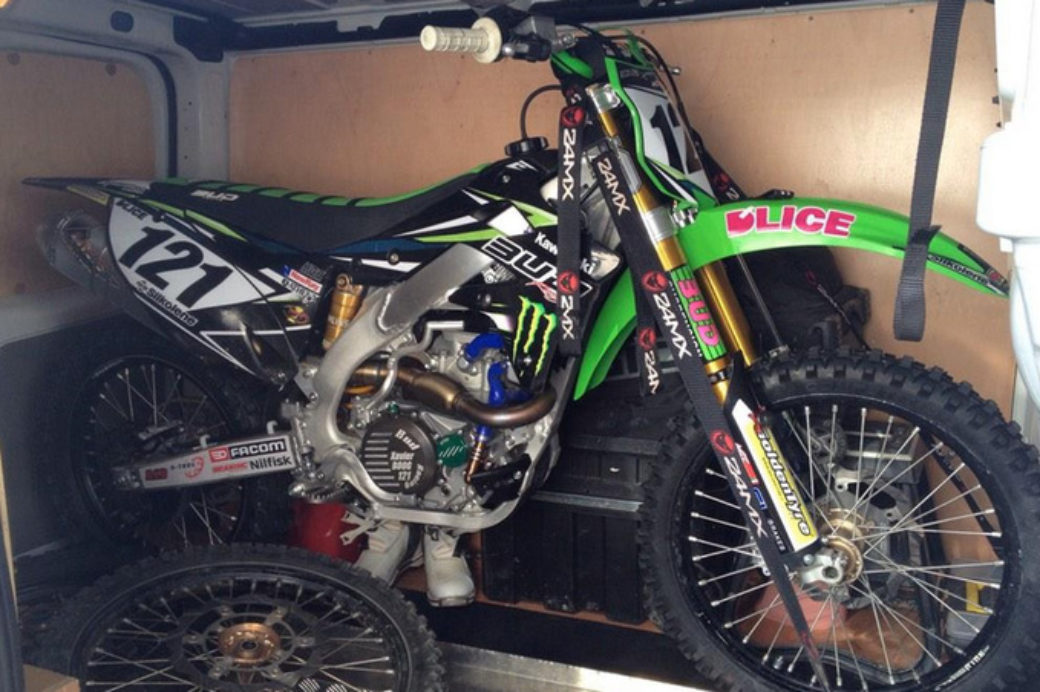 Ex-factory rider and French national champion Xavier Boog will be back competing in 2015 thanks to a saddle with Bud Racing Kawasaki. The 26 year old will focus on his domestic motocross and supercross campaign, select Grands Prix and will make a special bid to win the prestigious Le Touquet Beach race on February 1.

Boog fractured and sustained damage to his C7, T3 and T4 vertebrae in a scary dismount at his home Grand Prix at St Jean D’Angely in June. It was feared at one stage that he might not be able to race at the highest level again after eight seasons as a GP campaigner. Boog has recovered well however and was able to find a KX450F with the French Bud team for 2015.

“I can start riding again and don’t have any pain…but some discomfort afterwards and during the night. The most important thing is that I can get back on the bike again,” he said as a spectator at the Supercross Paris-Lille last weekend.

Boog remembers the crash that took place on one of the fast downhill descents at St Jean and occurred just two weeks before Joel Roelants fell at Maggiora and was not so fortunate with his spinal injury.

Although the accidents were completely different, Boog believes his neck protection helped limit his ailments. “I think so because the neck brace broke, so it must have done something. I hit a bump on the brakes and it threw me over the bars. I’ve crashed like that quite a few times in my career and even some accidents that were worse but it was just a bad one. It was a similar effect to diving into a swimming pool and hitting your head on the ground.”

“I knew I might be able to ride again because I could feel everything from the beginning,” he added. “I was still scared though, especially when it came to getting back on the bike. It was the first time I had injured my back and it is different to an arm or a leg. After two or three weeks I had moved past it and was focused on the job.”

The goal for the Frenchman is to now arrive back to the level where he might again be considered a decent bet for MXGP teams for 2016. The Bud contract also means getting back on a Kawasaki, a motorcycle with which he won an MXGP moto in Brazil three years ago.

First up is the hefty challenge of the Le Touquet Enduropale. “I have a good opportunity with Bud racing to do the national championship but also some GPs,” he underlines. ‘I hope it will be a good year. I’m happy to be on a Kawasaki again. I think the first year on the works bike was one of the best of my career. I’ve been riding it for one month and it is going quite good already. Of course the goal is to be French Champion – in motocross and supercross – I will start with Le Touquet. I know what I want to do there but it is not easy to talk about it because there are specialist guys just for that race! Anyway I’m happy to have a new goal.”