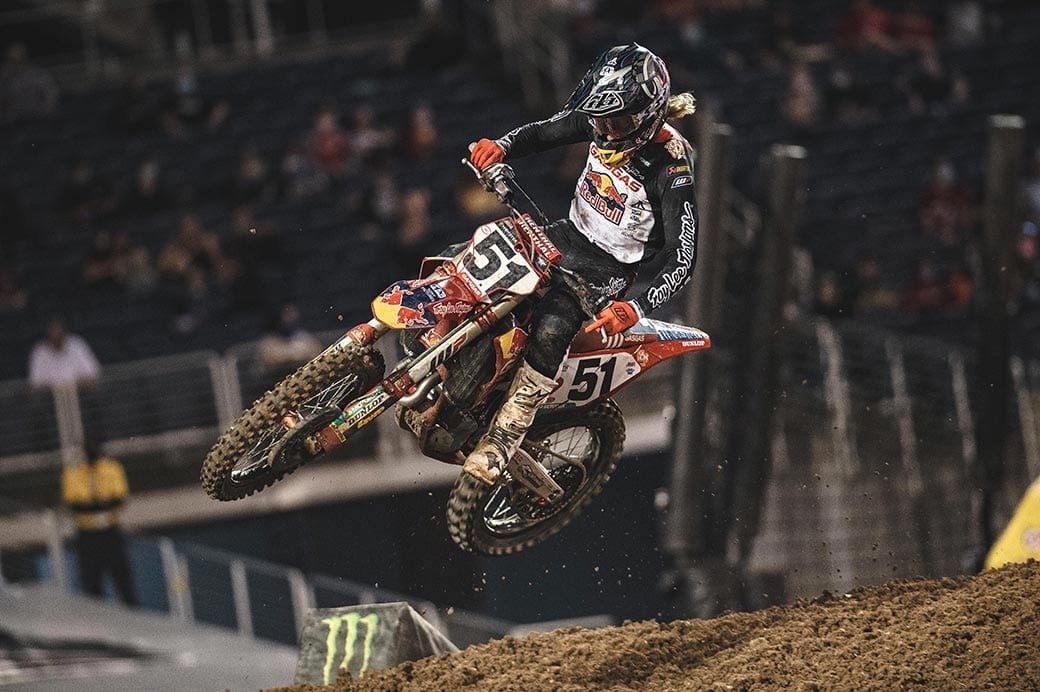 It was an overall positive night for Troy Lee Designs/Red Bull/GASGAS Factory Racing’s Justin Barcia, who finished just off the 450SX podium after a close battle at the seventh round 2021 AMA Supercross Championship in Orlando, Florida.

Team-mate Michael Mosiman was sidelined once again as he continues to recover from a hand injury.

Barcia had a low-key start to the night, grabbing a top-five position off the start of his heat race. He worked his way into fourth halfway through and brought it home for a smooth fourth-place transfer.

In the Main Event, Barcia overcame a bad jump off the line by sticking to the outside and funnelling into fifth through the first turns. He moved into third early on and established a solid podium run for more than half the race.

He made a mistake through the whoops and lost third but he was able to keep his momentum rolling enough to hold onto fourth. He collected himself and put in a last-ditch effort to reclaim third but it wasn’t enough to land on the podium in Orlando.

“It was a bummer mistake in the whoops that really cost me the podium,” said Barcia. “I pushed as hard as I could to try to get the pass on him but wasn’t able to get it done.

“I definitely know I have the speed, I just need to put everything together and move on from it. It was a little frustrating but it was good riding and I’m healthy and ready to move onto the next Orlando.”

Michael Mosiman didn’t line up for Round 7 but he made an appearance in Orlando to support his team. The young rider received positive news this week that no surgery is required to repair his broken hand so he will wear a cast for the next three weeks in hopes of making a swift recovery.