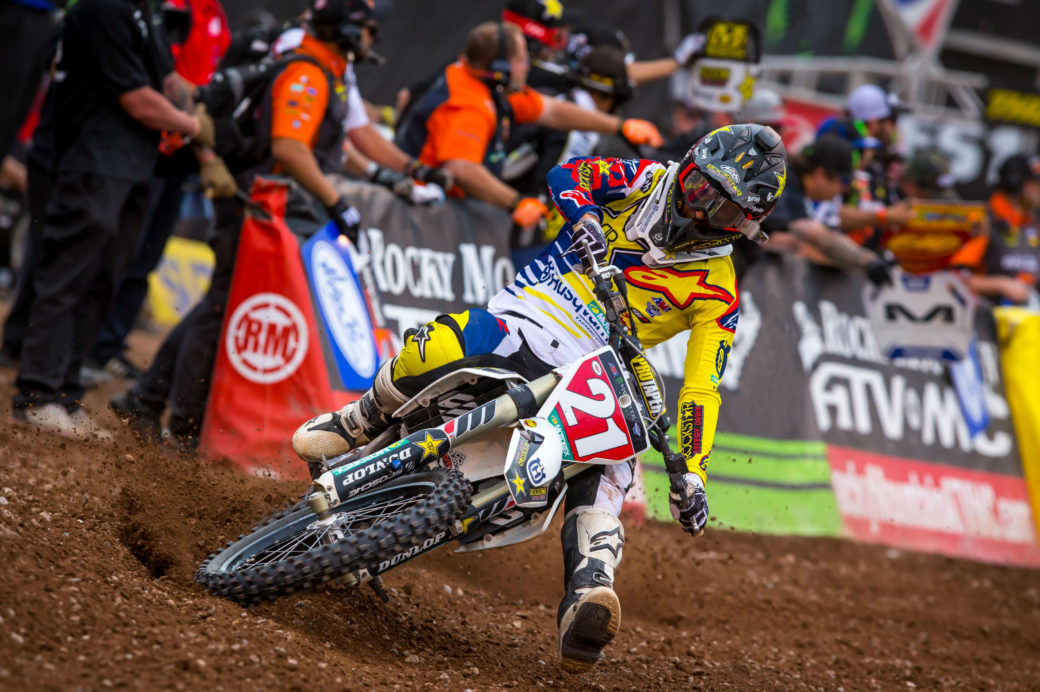 The Rockstar Energy Husqvarna Factory Racing Team rolled into a dry and dusty track for the penultimate round of AMA Supercross, held at Rice-Eccles Stadium in Salt Lake City, Utah on Saturday.

The team pushed through adversity to make a determined showing. 250 rider Mitchell Harrison came from the back of the pack to finish eighth after an early-race crash while Dean Wilson charged to a 13th place finish after getting hit by another rider shortly after the start.

450 points leader Jason Anderson battled through the pack with a championship on the line after going down at the start in a crash that left him two laps down. He heads to what promises to be an exciting season finale with a 14 point lead.

Mitchell Harrison battled for position all night. He was top-five at the start of his 250SX West heat and went down shortly after. He remounted quickly and was on the move. He charged the entire race and finished ninth to earn a spot in the 250SX West Main Event.

He was mid-pack at the start of the 250 Main but went down soon after. He made his way up to 15th by lap six then rode his heart out to make it to eighth for the finish. He is currently eighth in 250SX West rider point standings.

“My first two practices went really well and I felt confident,” said Harrison. “I crashed twice in my heat but got back to ninth and finished with a solid ride. Then I went down in the first lap in the main, but I came back strong to eighth. I can’t complain. I’m making gains so I’m happy.”

Dean Wilson, fourth overall in practice, was top-10 at the start of his heat and came out of the first lap in eighth. He quickly navigated into the fifth-place position and held strong to finish fifth and transfer to the 450 Main Event.

He was mid-pack at the start of the 450 Main and quickly got into the ninth-place spot. He was riding great until getting hit by another rider, forcing him to go to the mechanic’s area. He re-entered the track and was battling in 16th with 11 minutes remaining. He charged up to 13th by the end of the race, and is currently seventh in 450 rider point standings.

“I felt amazing on the bike and qualified fourth,” said Wilson. “I didn’t get a great start in my heat race, but I came back to fifth and was feeling good for the main event. I had around a top-10 start in the main but then was cleaned out by another rider and had to go to the mechanic’s area. I only made it up to 13th, but there was nothing I could do. I’m just going to come back strong.”

Jason Anderson was determined to overcome his notorious battles with altitude sickness coming into Salt Lake City. With a championship on the line, he immediately went to battle as he pulled second at the start of his heat then kept his head down to maintain consistency. He saved energy and went back to third in lap seven, then held strong to finish third and transfer to the 450 Main Event.

He went down at the start of the 450 Main after getting sandwiched between two riders. The crash forced him to pull into the mechanic’s area due to issues stemming from the incident. Two laps behind, he blazed back onto the track to salvage points. He started passing riders one-by-one as he charged through the field. He put in a valiant effort to finish 17th heading into the final round of the season. He sits 14 points ahead in 450 rider point standings.

“I was pretty good in practice all day,” said Anderson. “I had a solid heat race and qualified well. I just went down in the first turn in the main and had to go all the way around the track. I broke some spokes in the first turn and had to come into the mechanics area to get my front wheel changed. By that time I was two laps down.

“I was able to unlap myself and get up to 17th and at least get some points. I’m going into next week in Vegas with a 14 point lead.”