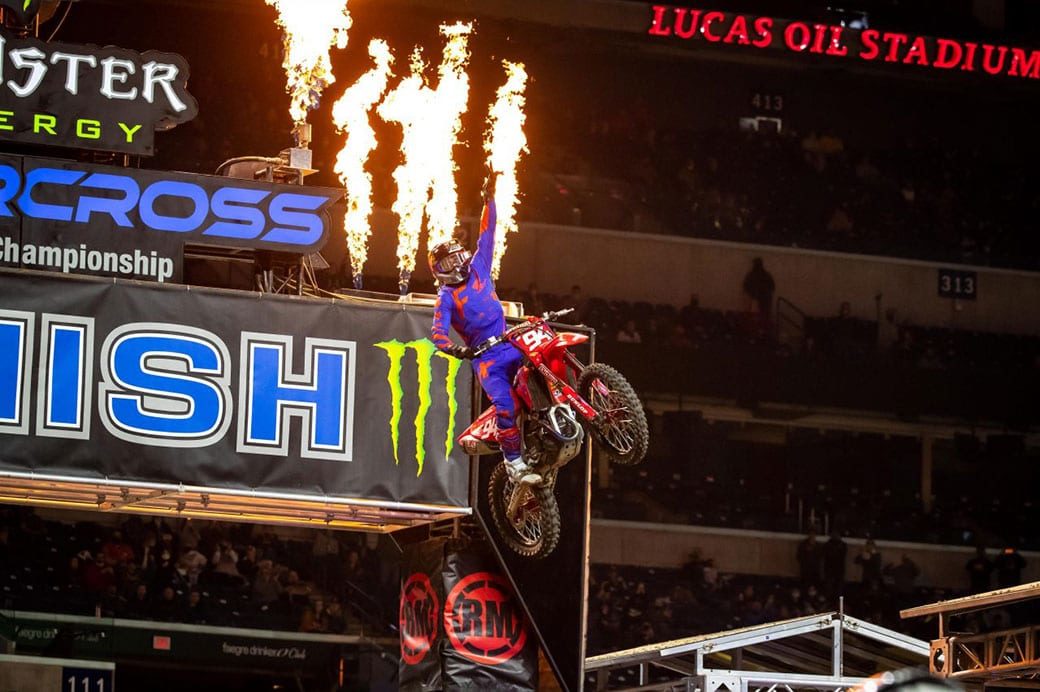 On Saturday, the AMA Supercross series completed its three-round residency at Lucas Oil Stadium, where Team Honda HRC’s Ken Roczen grabbed his third victory in just over a week, setting a new career milestone with three consecutive 450SX wins and extending his lead in the title chase to 16 points.

The German was perfect all evening aboard his CRF450R, topping his heat race and then taking the main-event lead shortly after the first turn. Despite pressure from first Justin Barcia and later Cooper Webb, Roczen maintained his calm and focus, strategically navigating through lapped traffic while running up front for all 26 laps and taking the win with a margin of just under a second.

Roczen’s team-mate Jett Lawrence finished fifth in the 250SX East class, four days after having to sit out the Indy 2 main event with a sore shoulder.

After being held up at the start and completing lap one in 12th place, Lawrence mounted an early charge that put him battling for fifth with Colt Nichols by lap two. The Australian was impressive as he held off the points leader, but he went off the track near the end and settled for fifth.

Indianapolis experienced chilly weather conditions over the weekend, with temperatures around 19º F (-7º C) at the time the evening program began.

Once again, there was a new track layout for Indy 3, with the first corner being a righthander, and this time there was no over-under feature.

Though Jett Lawrence has been dealing with a sore shoulder injury following a crash at Indy 2, he was able to put in a positive effort in Saturday’s race and plans to continue rehabilitating ahead of the Orlando rounds.

No virtual post-race press conference was held for Round 6, due to the late end time on Saturday and travel schedules on Sunday. 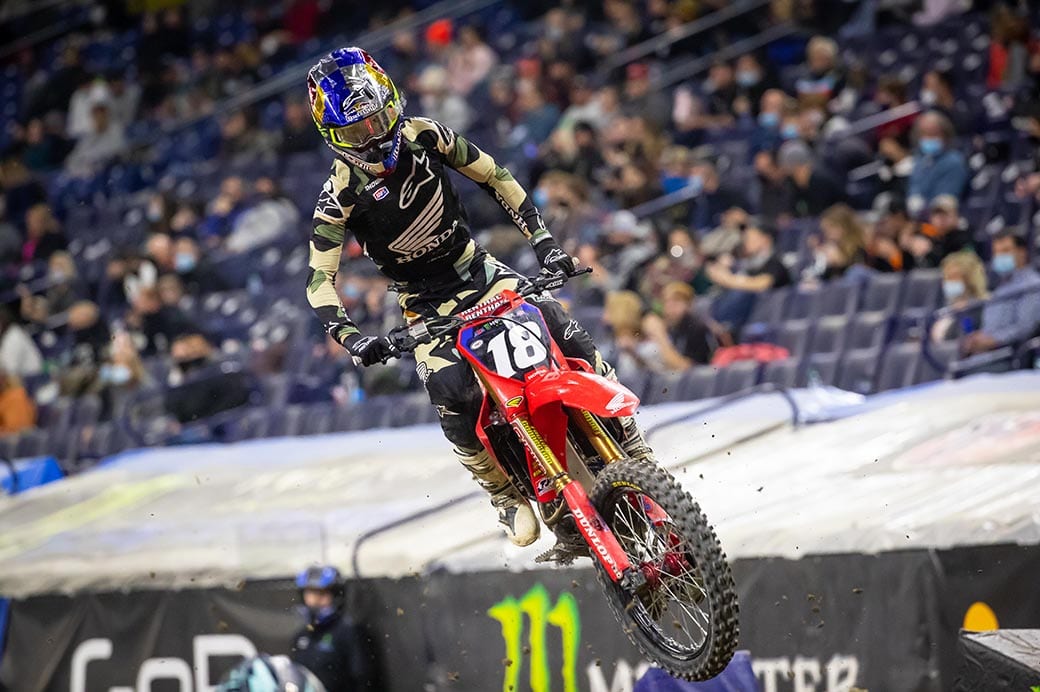 Prior to the evening program, Lawrence had a socially distanced meet-and-greet with Lucas Grounds, a young Indiana motocross and off-road racer who suffered a spinal cord injury in a December crash, and who has been undergoing treatment at Indianapolis’s Riley Hospital for Children. Lawrence presented Grounds with a signed jersey and several mementos from Team Honda HRC.

In the 250SX East class, Lawrence was second-best with a 47.979” lap time. Muc-Off Honda’s Mitchell Oldenburg was sixth with a 48.577” lap, while Phoenix Racing Honda rider Joshua Osby was 11th.
Roczen rode to a solid win in 450SX heat 1, while Friese, Bloss, Tickle and Brayton were fifth, seventh, eighth and 11th, respectively.

Lawrence carried his speed into the night program, finishing on top in the first 250SX heat race, with Oldenburg finishing second. In heat 2, Osby posted a seventh-place result. 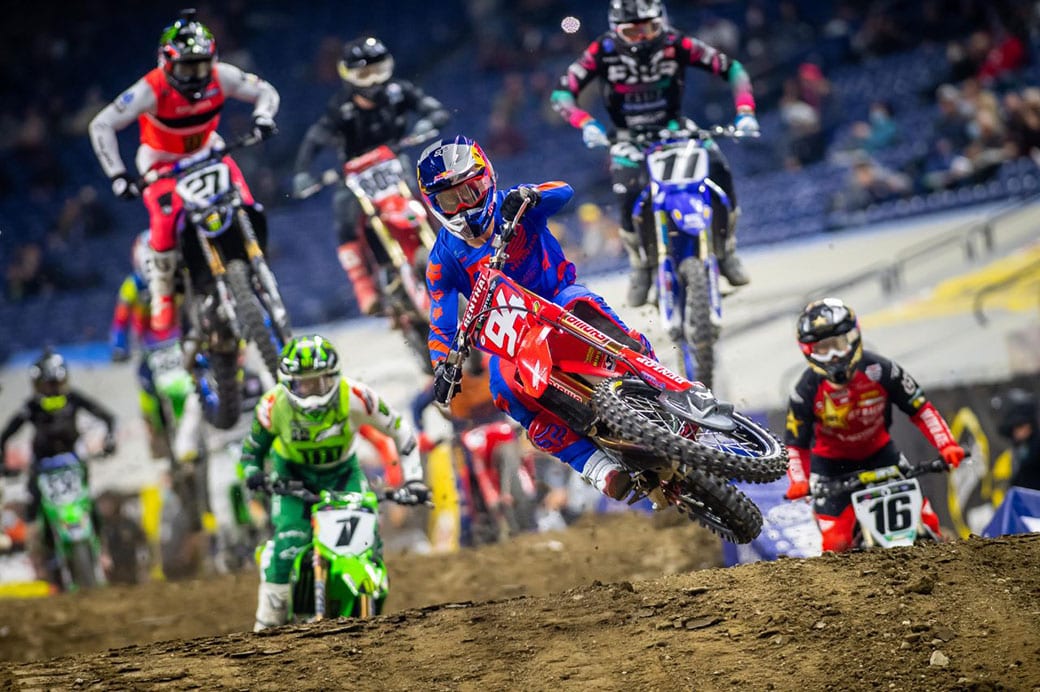 Team Manager Erik Kehoe: “The team did a great job finishing off the Indy trip. Ken was very impressive, meeting his goals to get good starts, ride consistently and be on the podium. He wasn’t feeling his groove earlier in the day, but his confidence and consistent good starts put him in a good position to dig deep and pull through for an amazing win!

“Jett pushed through the soreness of a banged-up shoulder from the last event to gain valuable points. He showed impressive speed, qualifying second and winning his heat, but a poor start and mistakes in the main event hindered his chances to finish on the podium.”

Ken Roczen: “Indianapolis 3 was a fantastic night. We started off in practice with a little bit of a struggle — just not really getting along with the track very well. I felt fine out there, but I simply wasn’t fast enough.

“We went into the night show though, and I knew that I was a better racer and that we were going to get a good result. After that we took the heat-race win and were able to get a good gate pick for the main event — sure enough, I got a really good start.

“Along the way, I came in contact with Justin Barcia, who hit me pretty hard and bent my shifter a bit — I wasn’t able to shift until like half a lap later. I held my lines and focused as much as I could and we did the three-peat, taking home another win on a track that wasn’t really my favourite.

“Those kinds of nights are when you get another step closer to a championship run, and it was really important for us to get more points and be gaining instead of losing. I’m so happy to finish all three Indianapolis main events in first, as I’ve never gone three in a row. This is huge for me and the team, and I’m looking to continue this streak when we come back next weekend in Orlando.”

Jett Lawrence: “I was managing my injury all day, but I’m glad that my shoulder was good enough that I was able to ride. It wasn’t what I was hoping for in terms of results in the main event, but it felt good to be racing and to get a heat-race win, even if I wasn’t 100 per cent. Now we get a full week before Orlando, and I’m looking forward to coming back and getting back on top.”

With the three Indy races in the books, Team Honda HRC will now head to Orlando, for Rounds 7 and 8. Team Honda HRC’s Chase Sexton missed all three Indianapolis rounds to continue rehabilitating his right shoulder, but he is hoping to return for the next race.