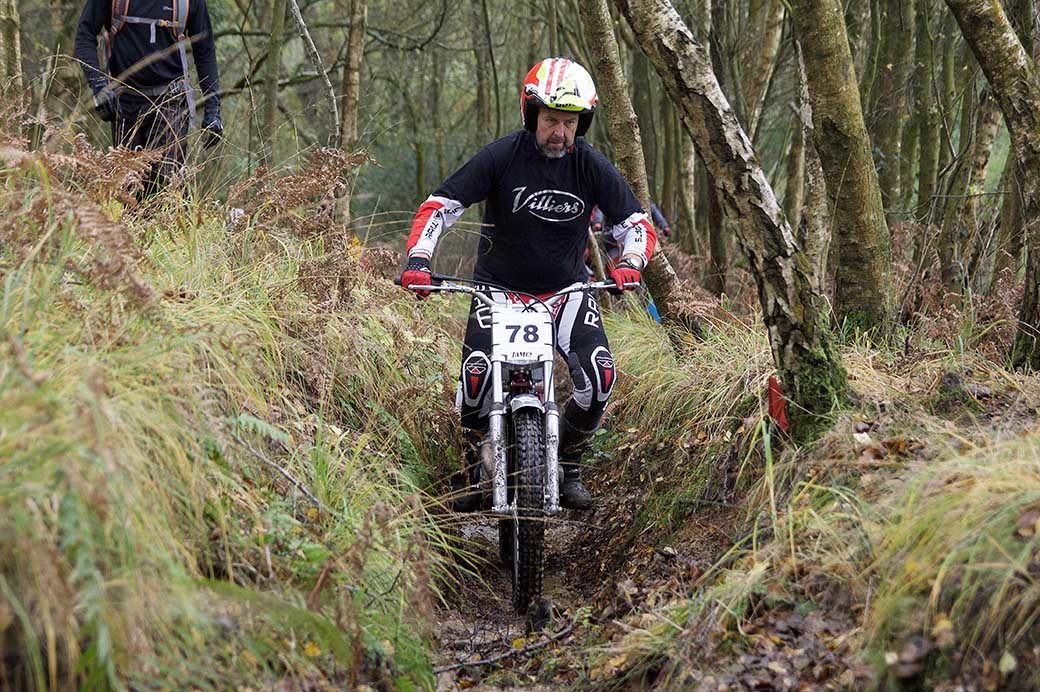 The 77th Perce Simon Trophy Trial saw Paul Anstey complete a hat-trick of wins to move up to seventh in the all-time winners’ list at Hamer Warren, near Ringwood, in Hampshire.

The third oldest trial in the UK was set out superbly in the strong winds and driving rain of the previous day, taking advantage of the New Forest terrain but avoiding the potential ‘bike breaking’ mud bath sections.

Three laps of 13 sections included challenging climbs and drops, tricky cambers and a reasonable amount of the slippery Perce Simon mud. The 77th running of the event included the final round of the ACU Southern Centre Championship which heightened the competition in some classes for the healthy entry of 84 riders. 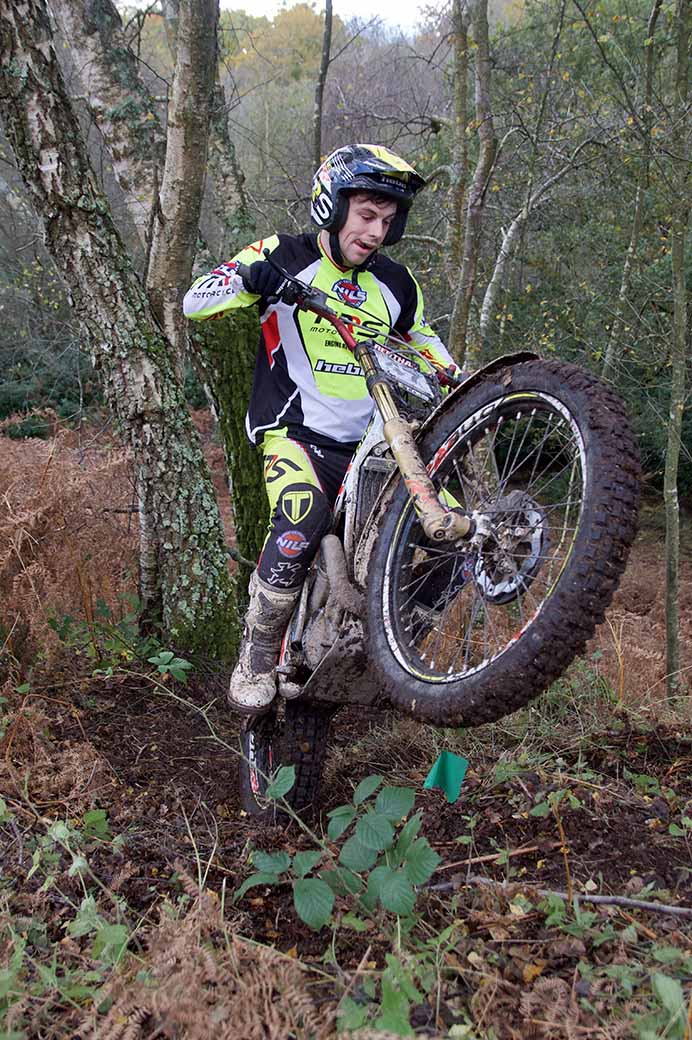 Sammy Miller, who is top of the winners list with six victories, introduced the trial, sharing some of the history and parading the trophy before setting the riders off on the near two-mile loop of sections – a far cry from the miles of road work between sections across the New Forest in past times.

The Perce Simon Trophy is awarded for the best performance by a Pre-65 rider and 2016 and 2017 winner Paul Anstey brought his immaculate James out of retirement to record his third win against a small but strong Pre-65 field.

Anstey was slow to get going though, taking his time to walk and observe the sections. With a late start number, he spotted an unorthodox line as early as section two – a slippery off-camber turn between two trees.

He learned from fellow Pre 65 contender John Miles who cut the corner, catching his rear wheel on a root. Miles, though, is not one to back off and launched between the trees, the bike coming to rest on its side as Miles tumbled down the bank.

Anstey cleaned this one and saved a few marks for other late runners copying the line. His first mark was lost on section six not quite lining up a ‘drop in climb out’ of a stream and taking a discrete dab spotted by eagle-eyed observer Dave Freemantle.

Geoff Herbert on his Ariel HT5 led after the six but paddling up a sandy slippery climb on 11 put him behind at the end of the first lap. 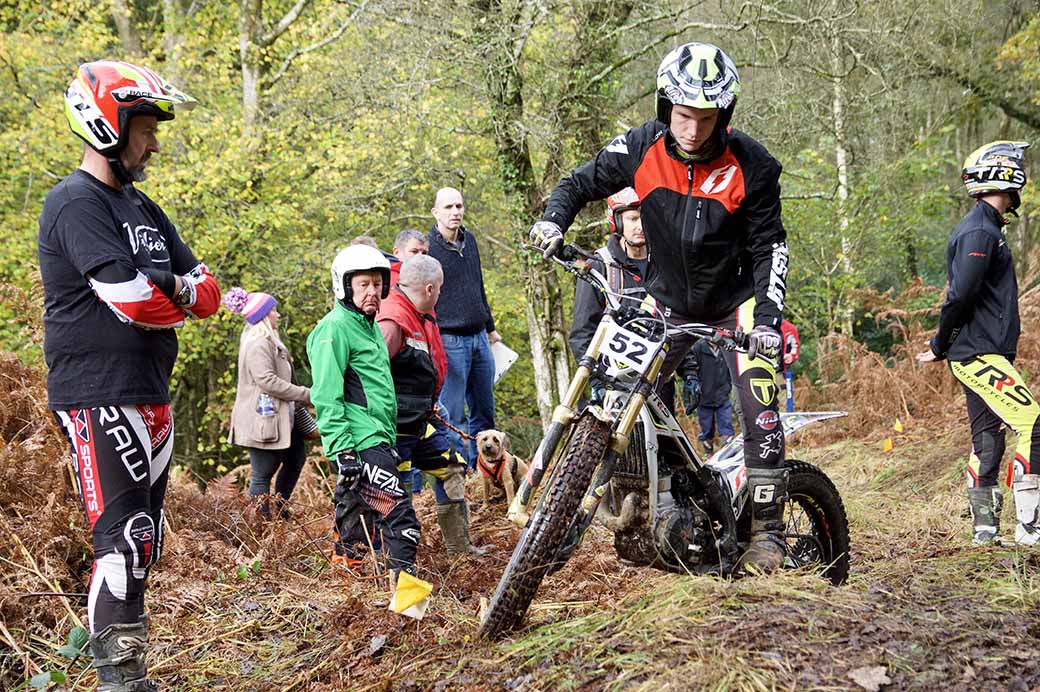 Anstey was clean on lap two until the eighth and not finding grip on a muddy climb cost him a five.

He thought he was out of contention but Herbert lost odd ones and twos, adding up to 14 to finish six behind Anstey, whose only other loss was a two, back at the eighth on the final lap.
Herbert and third-placed Neil Clarke, both on the mighty Ariels, concluded it was a superb 77th trial.

British S3 champion Chris Stay provided a masterclass on the Expert route, particularly climbing over a big log high off the ground on section seven – it was a, ‘How did he do that?’ moment for fellow riders and spectators.

Losing just two through ‘not concentrating’, he finished ahead of veteran Brian Francis who had a really strong ride. But a mistimed jump across the stream on section six for five cost him the chance to challenge Stay.

Ben Skinner was third after Rob Howard, who was having a very strong ride, had a freak accident colliding with another rider between sections on the third lap. It left his bike unrideable and his face needing some needlework!

The Centre Clubman Championship went down to the wire with Rob Hoyles holding a five-point lead over Gary Tarrant going into the final round. 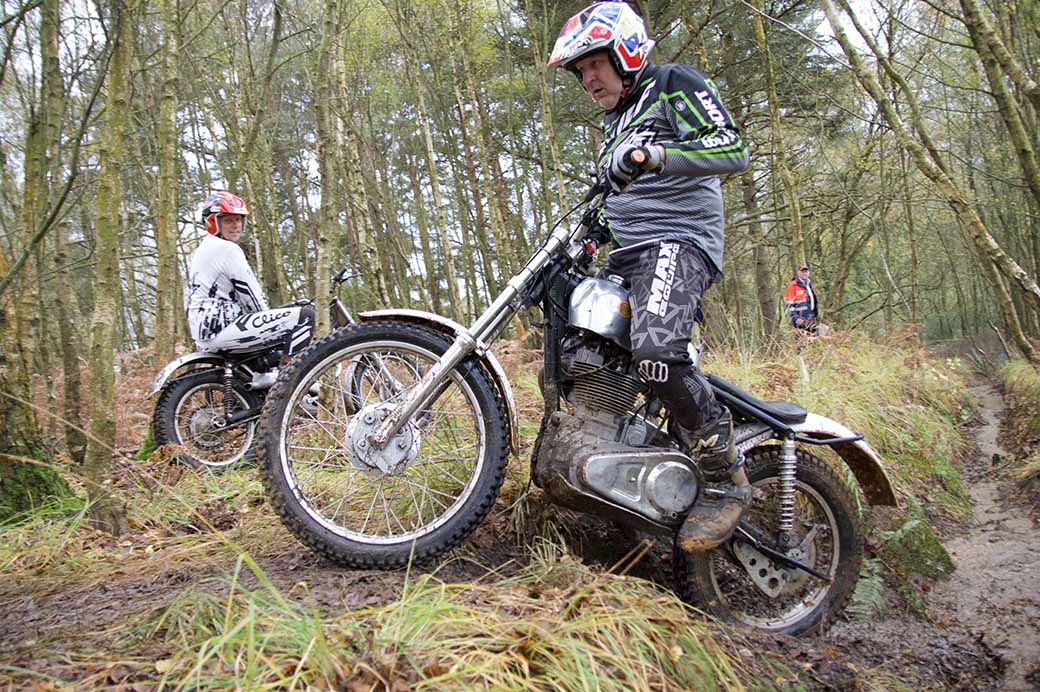 Tarrant and Hoyles finished all square on four both giving away ‘silly dabs’, but Tarrant lost his mark one section after Hoyles to win on the furthest clean tie-break. Hoyles finished two points ahead of Tarrant.

In the Novice class, Chris Hay produced one of his best ever rides to win on the day, finishing five ahead of Dale Francis who wrapped up an excellent season with the Novice Centre Championship.

Local Twinshock supremo Kev Downer took the class, despite coming to a halt on section 11 for a five – he held off Geoff Guy by just one.

Centre Twinshock champion Geoff Muston began section eight with nods of appreciation from Sammy Miller as he found traction through the mud and pinned the little 125 up the climb.

Then it went wrong, the front brake lever catching on a tree and Geoff and Honda tumbled down the hill end-over-end. Thankfully rider and bike were able to continue with Muston picking up a hard-earned third.

In the Non-championship classes, Scott Owen took family honour holding off dad Tim by three in the popular Novices, while on the D route there was a three-way tie with clean trials for George Greenland, Lloyd James and Guy Monk.

Alfie Gashir lost just one in the youths finishing ahead of NJ Hyde, Adam Kilbey and Monty Hillier.