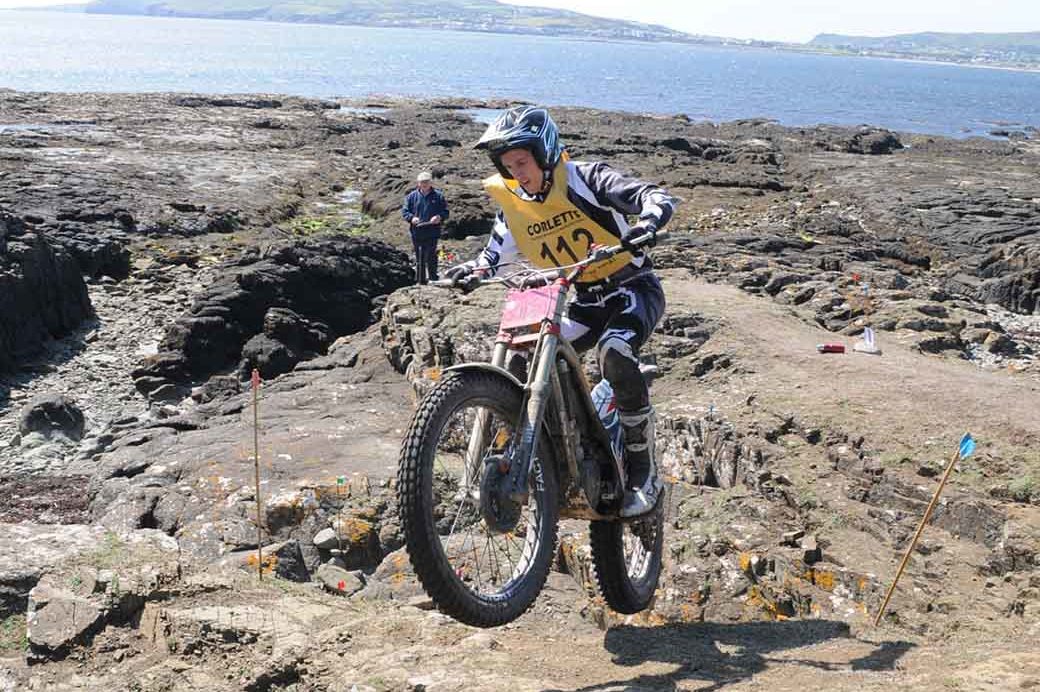 Josh Brain won the Manx Two Day Trial for a fifth time in eight years to go third in the all-time list of victors behind fellow Manxman Steve Colley and the legendary Sammy Miller.

Riding a new 300 Gas Gas he completed the opening day for a single five at Arrasey Glen, where, in his own words, he got “a bit excited”.

Brain’s biggest scare of the day came when he later viewed the provisional results later and saw that Northern Ireland’s Jake Hanlon had gone round the 40-section course without loss. But this was later found to be an error as Hanlon was in fact riding the Clubman sections. 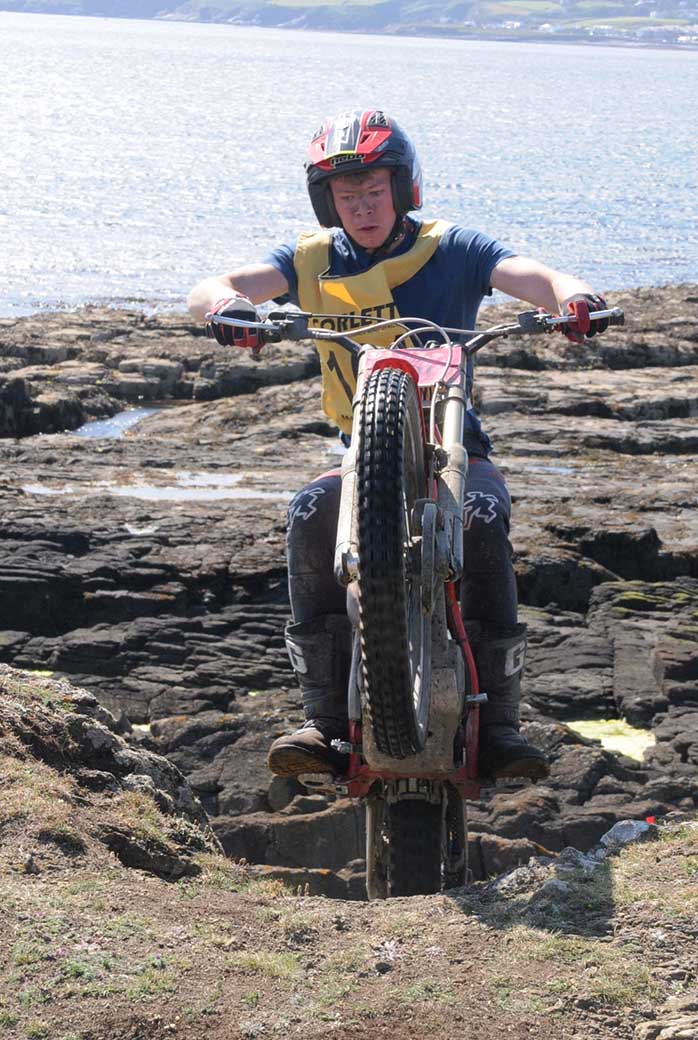 As a result, he led that category by a single mark from Sherco man Andrew Reeves, with another north-westerner, Kieran Hankin, third on two separate dabs for a route containing a number of tough sections – particularly at Scarlett – that led to a number of riders asking for fives.

He dropped 14 marks, made up of a single five on the second section of the trial, a pair of twos and five dabs. Next was Honda-Montesa mounted Steven Harris on 21. Day two began in the Baldwin valley area and continued with regulars like Brandywell Gulley and Axnfell Plantation, then further east and north.

Brain had his first dab of the day at Glen Mooar. Agneash followed by another on the middle section of three at Slieu Ouyr, then a two on the lone sub at Glen Mona. Continuing to ride sparingly, his only other loss was a dab on section 64 of the weekend, the last of four at Snubby’s Glen to finish on 10 for the weekend.

Top newcomer Jervis added 13 to his opening day score of 14 to finish on 27. He fived the tough hazard at Glen Mona where Brain dropped his two.

His fellow countryman and riding partner, Gwynedd Jones, leap-frogged Harris to grab third place with the second-best ride of the day on his Beta Evo. He dropped eight, including a single five, for a total of 32.

Tom Swindlehurst of the Lakes Grass Club also made up ground on day two to finish fourth on the leading Sherco with a total loss of 39, followed by similarly mounted William Brockbank and Steven Harris who added a hefty 35 to his running score to slip back three places to sixth.

Ben Sprigg missed out on a special award by a single mark, while Lancashire’s Joe Hiley was the best under-21 in 18th spot. Jake Hanlon had another impressive day on the 250 Beta to only add two dabs to his opening clean slate and take the Clubman win by a margin of four from Kieran Hankin who added four to his day to nip in front of riding partner Andy Reeves by a margin of five. 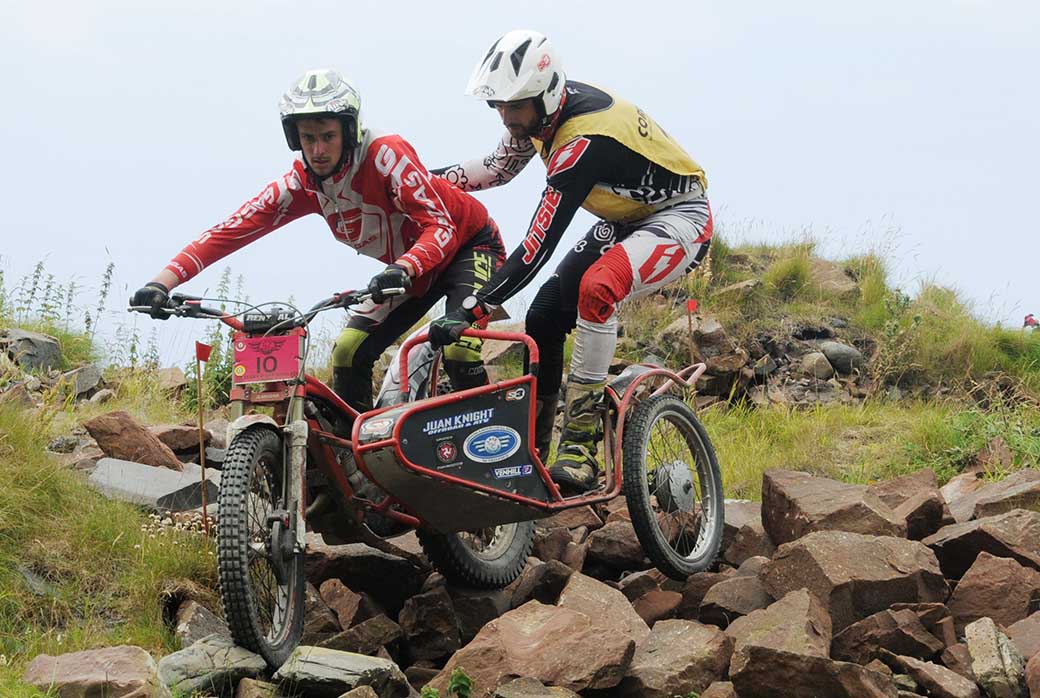 Jimmy McCanna, Simon Hiscock and best Over 50 Stephen Murphy rounded out the top-six, while the leading Clubman under-21 was Anthony Stephen in 24th spot on the Vertigo.

William Caine/ Sam Baxter topped the charts after the opening day in the north-east of the island, dropping a single three and two dabs, plus a five at Sir George’s Bridge quarry for 10. Next were Olly Lace/ Gaz Temple on the Beta with 12, including a brace of fives.

They were six ahead of the battle for third between father and daughter Nigel & Gracie Mae Scott, and Jack Corlett/ Beth Thomas. Seasoned campaigner Mark Bimson led the Clubman class with Jane Birchall by a clear margin of 18 from Lee Granby/ Paul Norman.

Lace/ Temple turned things around in the Expert class on Sunday to drop only six marks, adding a single five and a dab. This left them four ahead of Caine/ Baxter who had two fives and a couple of dabs to finish on 22.

Corlett/ Thomas edged five marks ahead of the Scotts to finish third, only one mark off a possible second. John Corlett/ Jamie Howe grabbed the other special award for fifth place.

Bimson/ Birchall rode all of Sunday’s 36 sections predominantly in the middle and west of the island without loss to end up 30 clear of Granby/ Norman with Mark Kemp/ Fiona Clark-Wilson edging out Trevor Moore/ Jim Davidson for third.